He has a Knack for Capturing Steelers Fans' Euphoria

Known as Jimmy Yinzer, he provides Steelers gear to fans near and far. 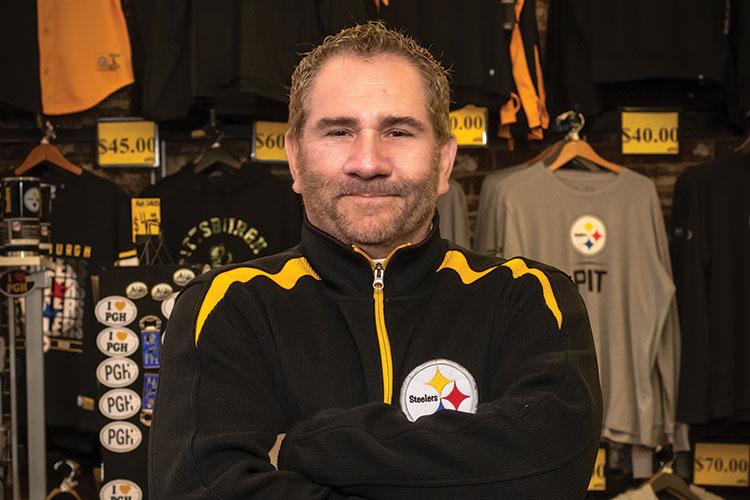 The Steelers’ kickoff at Heinz Field is 27 hours away, but at a packed store in the Strip District, Jimmy Coen is already in pregame mode.

Preparing for an imminent crush of customers, he zig-zags around racks of Steelers T-shirts, hundreds of black-and-gold keychains, magnets and stickers. He double checks the Steelers thongs, belly-button rings and leggings, making sure every item is in its place. Spotting two women rifling through a sales rack, he calls out to them.

“I have a special today — no limits on spending.”

Up and down Penn Avenue, Coen is known as Jimmy Yinzer. The 58-year-old learned to hawk Steelers stuff as a street vendor; he now runs three brick-and-mortar Yinzers stores in the Strip, including an outlet store. “They want more, more, more — and they want different,” he says. As a store owner, he became bigger and more visible last year when he opened the third Yinzers at the corner of Penn Avenue and 22nd Street, buying the space formerly occupied by the Mike Feinberg Co. party-supply store. 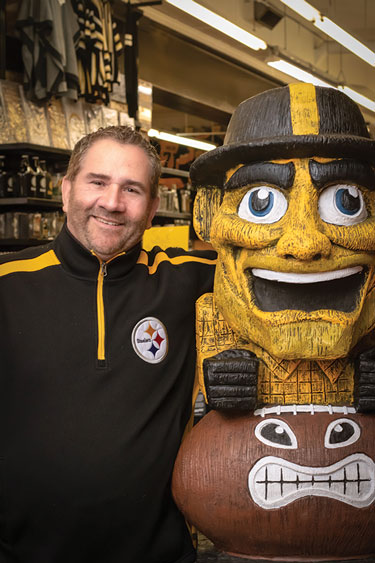 Coen has a knack for catching the wave of euphoria cresting on the street. “The atmosphere is ridiculous,” he says. “It’s like Black Friday. We call it black-and-gold Friday.” Or in this case, it’s a black-and-gold Saturday morning, as the city prepares for the next day’s game.

Modeling one of his best sellers, Coen came to work today in a $35 Peruvian cotton T-shirt with the word “Steelers” embroidered in black and gold. Yinzers also sells Pirates stuff, Penguins stuff and plain old Pittsburgh stuff — but Steelers merchandise accounts for 70 percent of the sales.

Once or twice a year, Coen returns to his vendor roots and drives his truck to sell to far-flung fans at away games. “Fan clubs call me. They might have a thousand people who want Steelers stuff, and they can’t get the goods.”

Even in enemy territory, a sizable percentage of spectators can be Steelers fans. When Pittsburgh plays a team it’s expected to beat, even more come out to watch. “They think you can’t get a Steelers ticket [at Heinz Field], so they travel to Alabama or wherever to see them. They come from Texas and Mississippi and New Mexico.”

When Coen took a road trip to Nashville about five years ago, Steelers fans lined up for his goods, making it one of his most lucrative away games. A group of friends, who play locally as a band, made the trip, too, and performed “Here We Go” in a bar. The longtime Steelers anthem boosted his sales.

A trip to Miami two years ago, however, wasn’t as successful. He set up his cart outside a Steelers bar. The store owner next door called the police on him. They’d been told to look for a guy in a black and gold shirt. Coen managed to avoid arrest by ducking into the bar, where he blended into a crowd of Steelers fans.

In the hometown Yinzers stores, Coen has a sixth sense for picking out an out-of-towner.

“Where are you from?” he asks a couple as they’re checking out shirts and stickers. John Stroup, a chef, says he now lives in Santa Rosa, Calif., but grew up in Ligonier. This is his first time back in Steelers country in 25 years.

Coen suggests the couple check out his original store, located on 1736 Penn Ave., with its Steelers train and bathroom wall covered in signatures (including those of current and former players such as Franco Harris and Jerome Bettis). He invites out-of-town guests to add their own signatures to the white wall, adding that it might be a challenge to find a speck of remaining space. 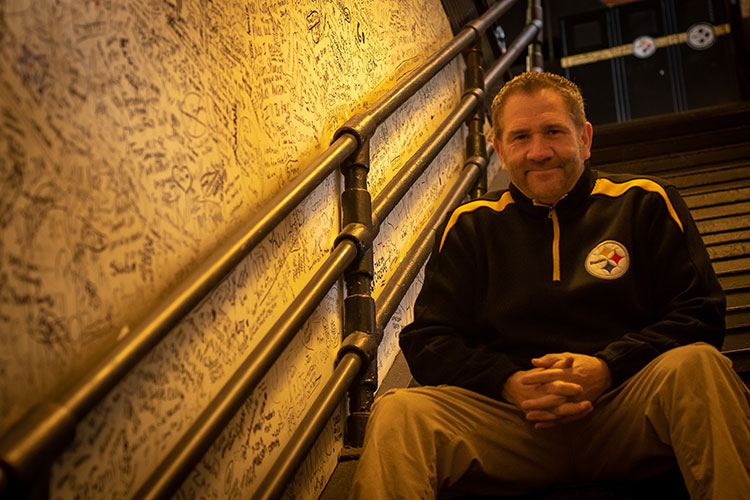 Some of the busiest days at Yinzers occur when a bus from Monterrey, Mexico, pulls up outside the store. Once or twice a year, the Mexican fans brave a 40-hour bus ride for the reward of a pregame shopping spree. It’s a reward for Coen, too, when that busload of people spends thousands of dollars.

But for all the frenzy, Coen has to choose wisely when it comes to the items he keeps in stock. Today, he’s weighing an offer: He might be able to get Steelers towels for a great price, but he would have to buy a shipment of 12,000. For now, he’s still weighing the risk.

One thing he knows from being a vendor: Stop and think. “Anything dated, Steeler fans won’t buy.”

This article appears in the January 2019 issue of Pittsburgh Magazine.
Categories: Community Feature