Drummer Jeff “Tain” Watts is taking inspiration from the works of playwright August Wilson –– born a generation prior in the same neighborhood –– to compose a suite of music that reaches into new territory. 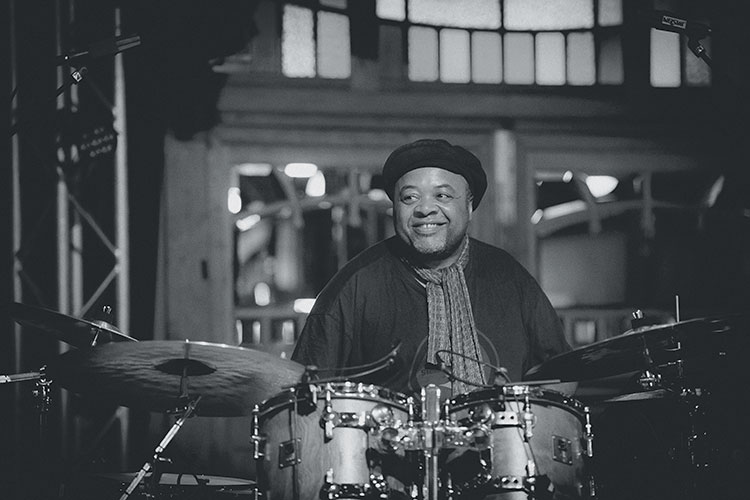 Artists find inspiration in many places — including the work of other artists. But a drummer drawing from the work of a playwright may be one of the less common methods. Ask Jeff “Tain” Watts. The recipient of a prestigious Guggenheim Fellowship in 2017, the Pittsburgh son and world-class drummer has spent the year composing a suite of music inspired by the plays of August Wilson.

Drawing upon his roots in jazz, Watts says the project will involve about 10 musicians but will also incorporate spoken word as a nod to the playwright who inspired the work.

With six Grammy Awards, Watts has increasingly turned to music composition as his creative outlet. The Guggenheim, given to those “who have already demonstrated exceptional capacity for productive scholarship or exceptional creative ability in the arts,” has provided him the opportunity to explore the connection he has long felt to the Pittsburgh playwright.

“We grew up in the same neighborhood. We walked the same streets,” says Watts. A generation apart, the two men never met. But both hail from the Hill District.

Both have also drawn upon their Pittsburgh roots as inspiration for their work — Wilson, most obviously, with his “Pittsburgh Cycle,” Watts with subtler references, especially to his family. His father, he has said, inspired his 2009 composition “Return of the Jitney Man.”

“My family were working people,” Watts says. He credits his dad for teaching him the importance of a good work ethic and to earn his living by doing something well.

What Watts did well was play drums. Music teachers recognized early on that he had perfect pitch, and a high school music teacher encouraged him to pursue music as a career. Watts started at Duquesne University, hoping to become a timpanist in an orchestra.

Jazz wasn’t something he was familiar with before college. Watts says he hadn’t really heard it growing up and only later discovered the recordings of jazz greats such as Charlie Parker and John Coltrane.

These discoveries sparked a change in direction. Watts transferred from Duquesne to Berklee College of Music in Boston, at the time one of the few places where one could study jazz, he says. It was at Berklee that he became good friends with Branford Marsalis, who asked him to join his younger brother Wynton’s band. The Wynton Marsalis Quartet won three Grammy Awards while Watts was a member. Having moved to New York City, the men were part of a wave of young talent that infused the music scene of the 1980s.

Also in New York — and hanging out in Brooklyn with Watts and Branford Marsalis — was Wendell Pierce. Though many now know him from his roles on “The Wire” and “Treme,” at that time, Pierce was a budding actor appearing in a production of Wilson’s “The Piano Lesson.”

Conversations between the friends served as Watts’ introduction to Wilson’s plays. The characters, the settings and the plots resonated with him. They depicted, of course, a glimpse of the Pittsburgh experience he knew so well.

And now, Watts says, he has seized the opportunity to focus on that connection. Over the past year, the project has sparked what might be called an explosion of Pittsburgh-inspired creativity.

“I’ve been calling it all ‘Sweet Pittsburgh,’” Watts says with an inimitable laugh.

Watts performed two compositions, “412” and “Sage,” at a recent show in New York City (while wearing a Pirates cap). The piece is dedicated to the late Geri Allen, former director of jazz studies at the University of Pittsburgh. Allen, a colleague and dear friend to Watts, passed away in 2017.

Most of the other pieces Watts has kept under wraps as he works to cull down the number of compositions and bring the project into focus.

When will we get to hear it? After the first of the year, he says with that laugh again, but he’s not ready to share details yet. No doubt, it will be worth waiting for.

This article appears in the December 2018 issue of Pittsburgh Magazine.
Categories: Things To Do