Have Your Beer … and Eat It, Too

Learn how to make beer battered onion rings and The Drunken Sandwich to commemorate the first Pittsburgh Craft Beer Week. 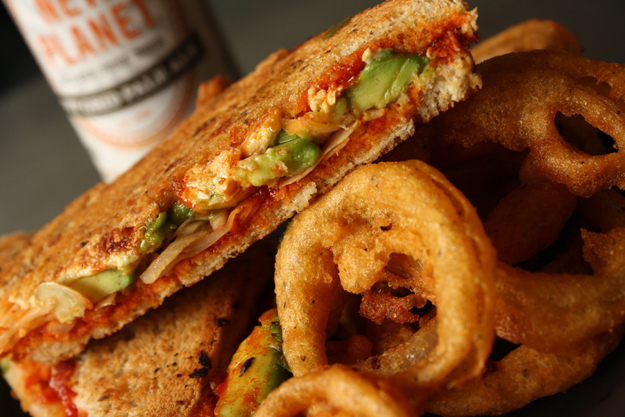 I don’t know about you, but ogling economic indicators isn’t as fun as it used to be. Like since the 1950s maybe. For someone who gets off on graphs, it’s been slim pickins lately. But there’s one graph that caught my eye and redeems them all. Consumer Confidence Index be damned, we have — after almost a century — finally recovered from the effects of one of the most ill-judged public policy initiatives of all time. Prohibition.

We hit rock bottom in 1930, then experienced a few years of resurgence before the craft beer version of the double-dip recession happened. The period from 1936 to 1979 can be considered the “dark ages” of beer, when the choices our parents had were limited to carbonated spittoon water. Of course, it would take a Democrat (the party party) to say “enough” of this, and Jimmy Carter ran for president on a Deregulation platform that — naturally — won him the presidency. As we know, Jimmy Carter would later win the Nobel Peace Prize, and rumor has it that it is because of his liberation of hops, malt and yeast.

Fast forward to 2012. I now have over 1700 craft breweries to choose from. Take that Moody’s. True, hipsters will still rebelliously tote their PBRs as an “in your face” to what some perceive as craft beer elitism, but only to the point where they can then whip out their rare Leavenworth Boulder Bend Dunkelweizen that they had to travel to Olympia, WA to buy. Of course.

This year, Pittsburgh celebrates its First Craft Beer Week with almost a dozen local breweries (I didn’t even know we had that many!) and over 50 craft brewers participating. Perhaps the best part of the festival is the Collaboration Beers — local breweries partnering up to produce limited edition brews.

But, this being The Brazen Kitchen, I urge you to broaden your grain spectrum and try the new grain brews out there. Used to be, if you were gluten sensitive, you had to stick to cider (or wine, which is cruel for fried food!)

Fortunately, that’s not the case anymore. There are some great breweries out there who are now producing varieties made from grains such as sorghum, millet and rice. My absolute favorite is New Grist Beer, an award winner at the singular Great American Beer Festival. It is absolutely delicious. No compromises there. Downside is, it’s hard to find around these parts.

But fear not — there are a few gluten-free varieties at local distributors and The Sharp Edge. That’s good news for gluten-free enthusiasts or the grain-curious. Red Bridge (which is actually an Anheuser Busch brand, not quite “craft”), Bard’s and New Planet are all available here.

What else does this mean? Now you can make those Beer Battered Onion Rings with a twist. With a great sorghum beer, some protein-packed chickpea flour and hefty hotness, you can now make the Best. Onion. Rings. Ever.  And if you pair it with this Drunken Sandwich, you’re all set to have your beer and eat it, too. Sure, you might feel a little guilt, but only for how much you don’t want to share any of it.

Makes about 4 servings (or serves one, four times) 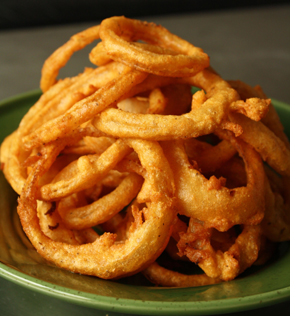 Preheat oven to 250 degrees — to keep your onion rings warm as you fry the batches. Line a baking tray with paper towels.

In a deep frying pan or dutch oven, heat the oil to 365F (you will know it is ready if you put a drop of batter or piece of bread and it immediately sizzles and browns). Make sure you have enough oil so that it is about 4 inches deep in your pan.

Peel onions and cut into thick rings. Separate the rings.

In a large bowl, mix first 7 ingredients and whisk until smooth. The mixture should be the consistency of pancake batter. Add a bit more beer if needed (a tablespoon at a time).
Let sit for about 15 minutes.

Dip the onion rings and shake off excess batter. Work in batches and do not crowd the onion rings. I find that using tongs makes it easier. Each batch will take about 2 minutes, try to turn the rings once or twice during the process.

Monitor the temperature of your oil — it will cool off with each batch, test it before you put the next batch in.  The temperature of the oil spells the difference between a crispy, “healthy/er” deep fry and a soggy, oily mess.**

Season with salt and pepper. Enjoy.

The Drunken Sandwich recipe can be found here. 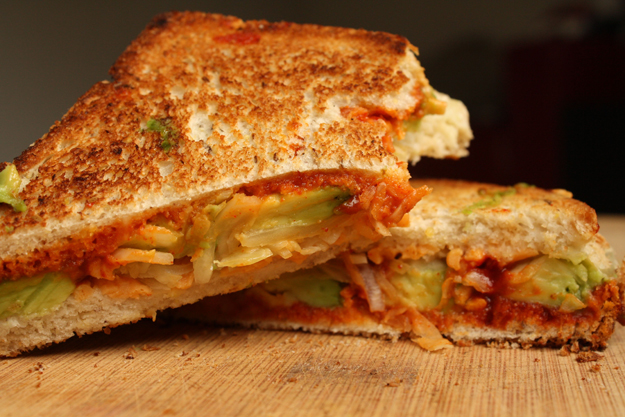 *I don’t fry very much — much less deep fry — and on the rare occasion that I do, I do not discard the oil. Whole Foods Market provides receptacles for you to dispose of your oil so that they can recycle it as fuel.

**Those bits of dripped batter that fry along with the rings? SAVE THEM. WE WILL USE THEM IN AN UPCOMING RECIPE. Trust me. It will be good. Drain the oil in paper towels (along with your rings). Place in an airtight container and store in the fridge. It will store indefinitely. And we will use them soon.