Have Fun with Your Family

Treat the wife and kids to an outing they'll never forget: From old-school video games to star parties to amusement parks and more. 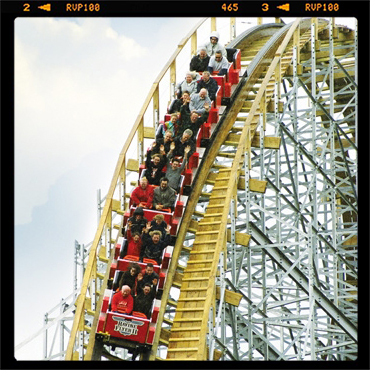 ENJOY AN OLD-FASHIONED FUN HOUSE AT WALDAMEER PARK: The old-fashioned charm of Erie’s Waldameer Park (opening in May for the season) is hard to beat. This amusement park, founded in 1896, also offers some newfangled wonders as well, including the ferris wheel, X-Scream and Ravine Flyer II roller coaster—all with views of Lake Erie. Nighttime brings a whole different atmosphere, when the park comes alive with constellations of lights and flashes of neon. That’s as good a time as any to take on its two vintage fun houses (or dark rides, in amusement-park parlance). Whacky Shack and Pirate’s Cove—creative, campy and creepy—were both created by Bill Tracy, who could be considered the Frank Lloyd Wright of dark-ride design. 3100 West Lake Road, Erie. Info: 814/838-3591, waldameer.com

LET THE NIGHT SKY AMAZE YOU AT A "STAR PARTY": Now through October, free star-gazing parties at Wagman Observatory are open to the public. You don’t need your own telescope to hang with the experts: AAAP members love answering questions from newbies and giving guided tours of the sky. Once your eyes fully adjust to the darkness, you’ll get a peek at the mind-blowing beauty of meteors, nebulae, star clusters and even far-off galaxies. Bring your own refreshments and a jacket for cool summer nights. And remember to turn off your headlights as soon as you arrive at the observatory so that you don’t illuminate the viewing area. Parties begin at dusk; donations welcome. P.O. Box 314, Glenshaw. Info: 724/224-2510, 3ap.org

… OR WISH UPON A STAR & MILLIONS MORE AT CARNEGIE SCIENCE CENTER: Don’t look around for the red carpet. Instead, if you really seek to be star-struck, cast your eyes upward to the black velvet of the night sky and ponder heavenly bodies in all their non-tabloid-hyped splendor. For just $1, you can get up close with not only with stars, but also with planets and nebulas via SkyWatch at Carnegie Science Center. One Allegheny Ave., North Shore. Info: 412/237-3327, carnegiesciencecenter.org

BECOME A SUPER SLEUTH AT CARNEGIE SCIENCE CENTER'S "CSI"-THEME SLEEPOVERS: Mystery … Crime-solving … Omnimax movies and late-night snacks! The Carnegie Science Center offers overnight workshops on the finer points of sleuthing that teach science and skills through lots of fictional fun. For $35 per person, you can partake in an overnight adventure that’ll challenge your brain, while also having the option to explore the science center (and the USS Requin Submarine docked outside) free of charge the next day. Children do need a chaperone, but mom and dad won’t mind: This just might be the ultimate form of parent/child bonding. Did we mention the laser show? One Allegheny Ave., North Shore. Info: 412/237-1637, carnegiesciencecenter.org

OUTDOOR VOICES WELCOME AT JUMPIN' CASTLE'S INDOOR PLAYGROUND: There’s no need to hush at Jumpin’ Castle. Off-limits activities are readily encouraged, including throwing (in the basketball court), climbing (on the indoor rock wall) and jumping off the walls (in the bounce house). Staff looks on as little ones climb inside a floor-to-ceiling, castle-themed play structure with a suspension bridge, trolley glide and two slides. You know it’s fun when your tuckered-out tots throw a tantrum when it’s time to leave. But no worries—they’ll soon be snoozing in the car after all the excitement. 901 Warrendale Village Drive, Marshall Township. Info: 724/933-5272, jumpincastle.com

WATER SLIDE AU NATURAL AT OHIOPYLE STATE PARK: It took thousands of years for the stream to cut a channel in the sandstone bottom of Meadow Run. But the resulting 100-foot-long water slide is an incredibly fun miracle of nature. Slide down the twisty route, then plunge into the swimming hole at the bottom. This all-natural, cost-free attraction is accessible from the Meadow Run Trail hiking route in Ohiopyle State Park and was recently named one of the country’s top three water-slide hikes by Backpacker magazine. Pro tips: Wear jean shorts and shoes, and call ahead to check water levels in addition to safe sliding conditions. Park in lots off Route 381 or Dinnerbell Road. Info: 724/329-8591, dcnr.state.pa.us

TAKE THE MANSION TOUR AT HARTWOOD: When John and Mary Flinn Lawrence built their dreamy Tudor mansion in 1929, they probably didn’t expect that, one day, outsiders would have the chance to wander through their bedroom and peek in their closets. But we can, and you should. The house, preserved much as it was when the Lawrence family lived there, boasts stunning architecture and a formidable collection of English and American antiques. Immerse yourself in Pittsburgh’s past, but do make reservations first: The house is sometimes closed for private events and is currently doubling as the haunted mansion for the super-spooky Fox TV series “Locke & Key.” 200 Hartwood Acres, Hampton Township. Info: 412/767-9200, alleghenycounty.us/parks/hwfac.aspx

GET YOUR DOG TO FETCH A HOME RUN AT PNC PARK: This season, the Pittsburgh Pirates revive their Pup Night promotion, where you can bring your pooch to the game with you (provided your furry buddy is up-to-date on his shots and vaccinations). You’ll enjoy the game from the deck-seating section while Rover devours treat handouts and sniffs his peers. If you want your pet to make the “SportsCenter” top 10, keep an eye out for long homers; it’d take a whopper to make it to the deck, though. This year’s Pup Nights are on April 26, May 24, June 21, July 5, Aug. 16 and Sept. 13. 115 Federal St., North Shore. Info: 412/321-2827, pirates.com

SHOW THE KIDS HOW VIDEO GAMES USED TO BE AT GAMES N'AT: If you were born between 1970 and 1990, you’ll fondly remember the arcades of your youth as just about the coolest places on earth. If your children were born after that, they’ll find the concept of going somewhere to play video games to be completely foreign. Fortunately, you can give them a flashing, beeping history lesson at Games N’At. Pinball, air hockey, skeeball, newer arcade games and—for a trip down memory lane—Space Invaders, Pac-Man and Donkey Kong can all be played. Games N’At is easily one of the most joyful places in Pittsburgh. 2010 Josephine St., South Side. Info: 412/481-2002

WHET YOUR APPETITE FOR SCUBA DIVING BY BOOKING LESSONS: There aren’t many places on this planet where you can check out a book and/or go scuba diving. (It’s probably not a good idea to do them simultaneously, though.) Well, such diverse opportunities await at the Carnegie Library of Homestead, where the historic complex’s pool serves as the site for Pittsburgh Scuba Center lessons. Although not affiliated with the library, the center uses the pool to prepare beginners as well as those seeking advanced instruction for life underwater. With a diver certification, you can join center members on excursions to places near (like Lake Erie) or far (a trip to the Galapagos Islands is in the works for 2012). 818 Ann St., Homestead. Info: 412/461-3181, pittsburghscubacenter.com

ZAP! SOME ENERGY INTO YOUR SATURDAY ROUTINE AT THE TOONSEUM: Do your kids love Krabby Patties? Are they slowly becoming bilingual, thanks to “Dora the Explorer?” Then the Cultural District’s ToonSeum is the best place to spend a Saturday with animated friends from the past and present. It’s just one of three museums in the nation that’s completely devoted to the cartoon arts. In addition to vintage cartoons and rare comic prints (some dating back 100 years), the ToonSeum also features stuff for big kids, too, like film screenings of Japanese anime and cartooning workshops. Better yet, your wallet won’t go Ka-blam! because children 12 and under are admitted free. 945 Liberty Ave., downtown. Info: 412/232-0199, toonseum.org

LET OUT YOUR INNER CAVEMAN (OR CAVEWOMAN) AT LAUREL CAVERNS: If Fred Flintstone could choose a man cave, Laurel Caverns might be the spot. But there’s fun here for Wilma and Pebbles, too. Take a tour and spelunk your way through the meandering passageways and rock formations in Pennsylvania’s largest cave, located beneath a 435-acre geological park. The site offers a number of other attractions as well, including Kavernputt, an 18-hole golf course inside a 10,000 foot simulated cave. Yabadabadoo! 200 Caverns Park Road, Georges Township, Fayette County. 724/438-3003, laurelcaverns.com

This article appears in the April 2011 issue of Pittsburgh Magazine.
Categories: Things To Do