Haute House: Something Special is Happening Inside

It’s only fitting that Eric Kordenbrock and Brianne Conley, the owner of No. 14 Boutique in Lawrenceville, would have a home as chic as Conley's clothing store, but getting there took a leap of faith — and a lot of work. 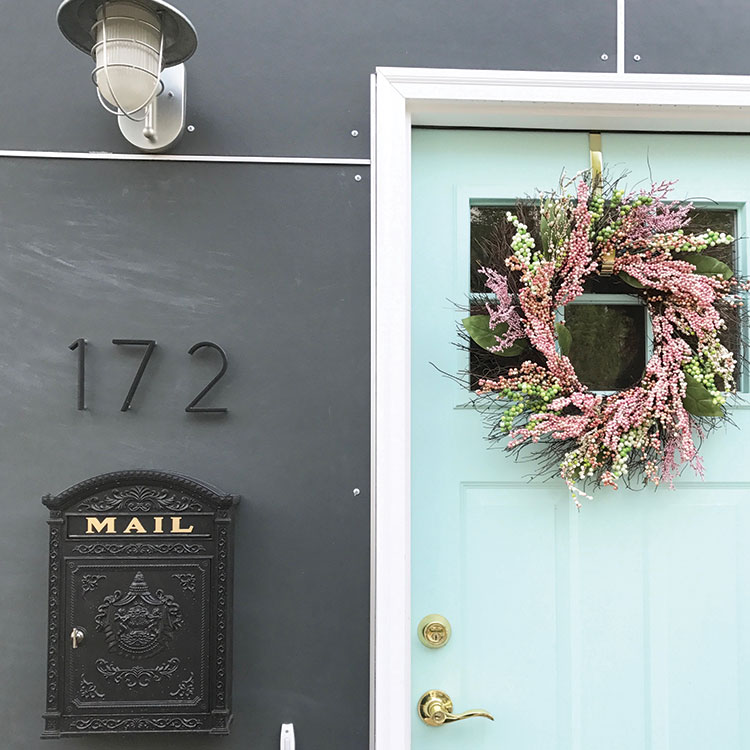 The sweet mint-colored door of the Lawrenceville house where Brianne Conley and Eric Kordenbrock live lets visitors know there must be something special happening inside. |photos by Brianne Conley

Once they pass the threshold of the couple’s effortlessly Instagram-worthy abode, the suspicion is confirmed. The home, once cramped, sectioned-off and begging for natural light, has been transformed into an open space filled with nods to Conley’s impeccable personal style.

This is what happens when the chic owner of a popular clothing shop designs her dream home.

“I love that it’s all us,” says Conley, who owns No. 14 Boutique on nearby Butler Street. “We like all the little details.” 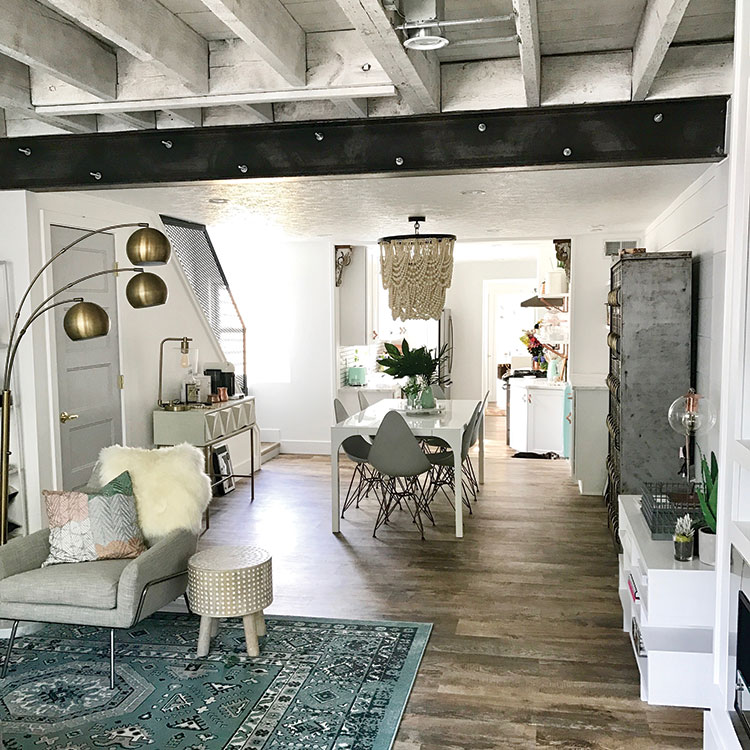 To give the house an open feel, the owners replaced a fireplace that separated the living and dining rooms with a steel beam.

The details truly make the home, from the whimsy of the bee-pattern wallpaper in the powder room to the drama of the draped wooden bead chandelier above the dining table. But before they could get to any of those touches, the couple had to commit to a house in need of serious rehabilitation.

They learned of the house through Michael Wright of Steel Town Properties after they saw examples of his renovation work showcased on a house tour. Steel Town, which made its mark on its namesake with a slew of successful jobs in the South Side, has made Lawrenceville its next target area.

Wright suggested they see a home he’d recently purchased, but at first glance, Conley was unconvinced. Its closed floor plan with multiple small rooms on the first floor bisected by a fireplace in the center, left her underwhelmed. When Wright’s team gutted the space, however, he urged her to see it again. She did so with her husband in tow, and the two were able to see the potential hidden behind all of those walls. 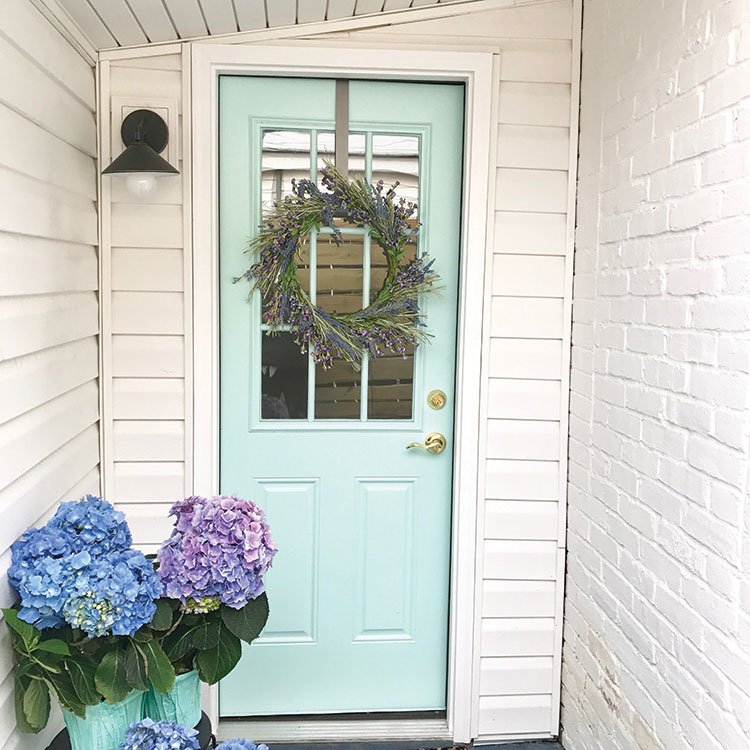 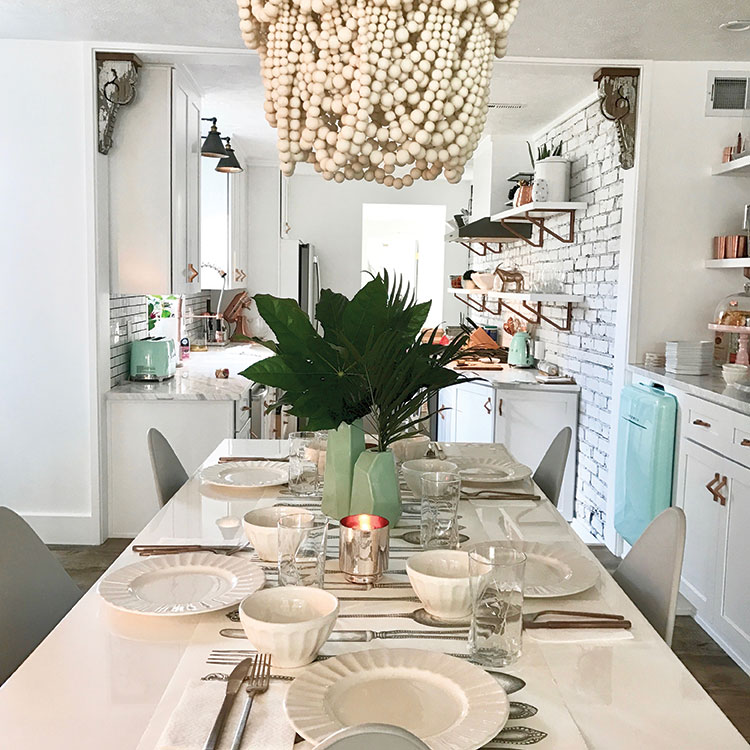 “We actually agreed to this house when it had dirt floors,” says Conley, smiling at the memory.

Wright says he gives the couple credit for their ability to see all that the home could be.

“I figured they’d be running away the second they walked in the front door, but they had the vision, too,” he says.

They signed paperwork on Black Friday 2016 — a date small business owner Conley remembers well — and work began during her most hectic time of year. She was not stressed about the process, however, having already experienced a substantial renovation job firsthand. 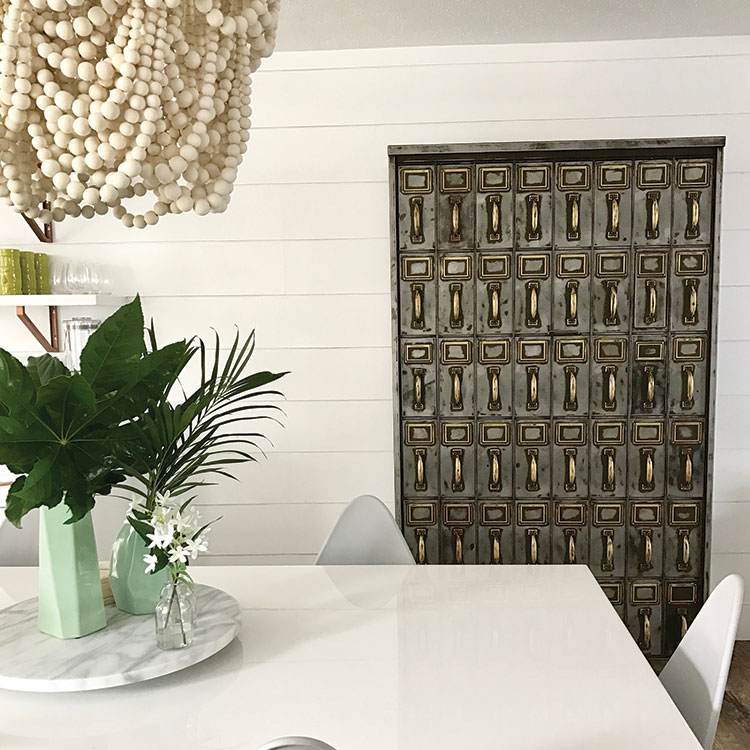 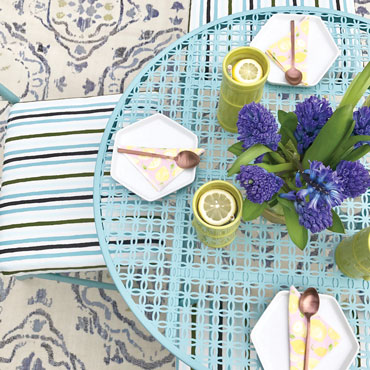 “My store used to be a rundown old bar,” she says. “My parents purchased the building as the bar, and we renovated it. We had to go through four walls and three floors to get there. To see the transformation to what it is now is unbelievable.”

Conley wanted to be as hands-on as possible with the job. She consulted Pinterest and her mother, Michelle, for inspiration and created an aesthetic all her own.

The farmhouse feel flows from elements such as the shiplap walls and whitewashed wooden beams in the living room. What appears to be reclaimed barnwood underfoot is actually a laminate, chosen for its low maintenance, that is similar to the flooring in No. 14 Boutique. 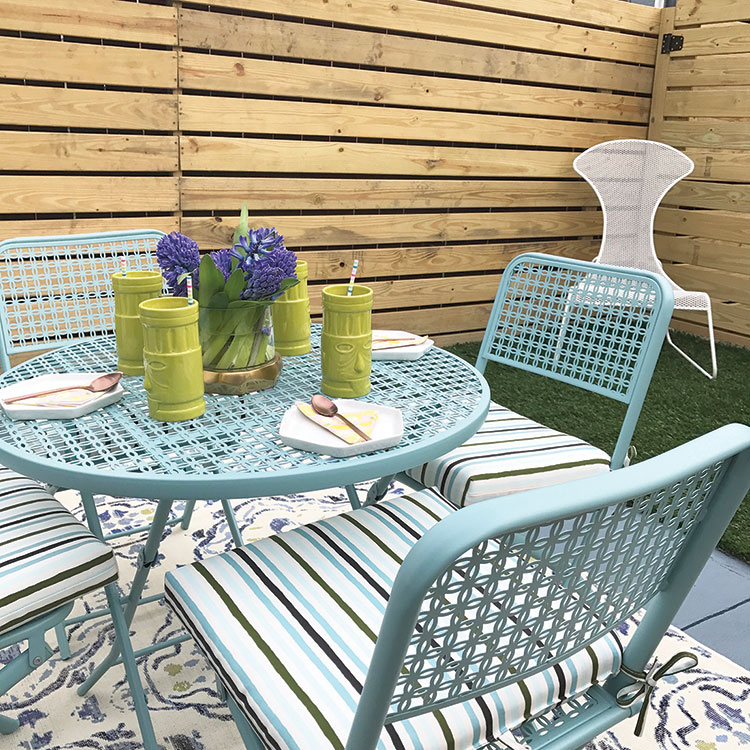 Other choices combine to create an interesting juxtaposition of industrial vintage and classic retro vibes. A repurposed filing unit found at Toll Gate Revival in Lawrenceville once held court documents; it now houses the couple’s red wine collection. A classic mini-fridge in the bar area off of the dining space adds a touch of nostalgia.

A step-down into the wide galley kitchen elevated the ceiling height, and the addition of windows above the sink and at the staircase landing allows for plenty of natural light. Conley opted for copper accents in the kitchen instead of now-trendy gold and found the perfect spring spout faucet to match. 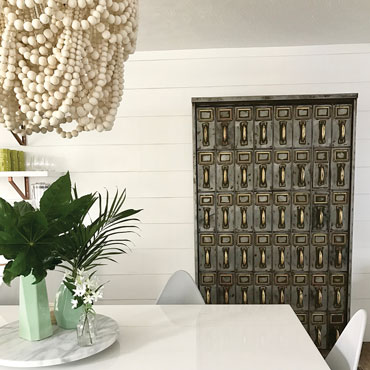 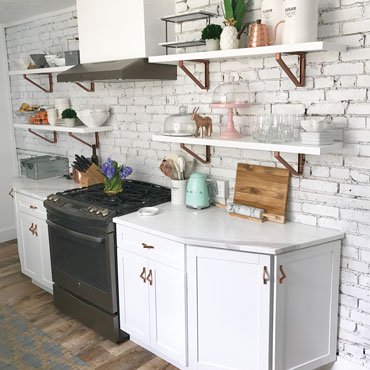 “I just wanted something dramatic,” she says of the faucet. “One of the reviews for it said, ‘I actually laughed when I took it out of the box because it’s so big.’ I was like, ‘Yep, that’s me!’”

The white of the shiplap and exposed brick throughout the first floor creates a clean canvas and allows design details to work together uninterrupted. The space extends to Conley’s home office at the back of the house, where two glass doors open to an enclosed yard.

The second story houses a master bedroom with a vaulted ceiling and exposed beams, a laundry area and an office for Kordenbrock, who works in medical sales. The bathroom’s elegant black-and-white tile adds modern flair while a stretch of grate fencing serving as a staircase railing introduces a more masculine touch. 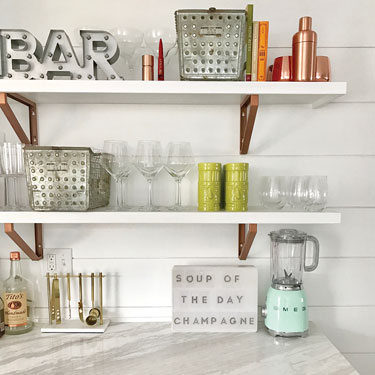 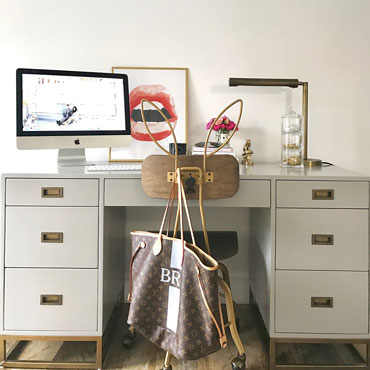 Back downstairs, the team’s work to open the space can be seen by looking up. A steel beam now serves as support in the absence of the fireplace that once separated the living and dining rooms.

“The house was very compartmentalized,” Wright says. “The first challenge was to open that space and take the chimney out. We had to maximize the overall square footage to make it feel 300 or 400 feet bigger.”

Wright calls the home's style “farmhouse-modern.” He adds that while Conley’s eclectic decor at first was a departure for him, he’ll likely use elements of it in future jobs.

“Once you put it all together, it works and looks amazing.”

Rachel Weaver LaBar is a longtime Pittsburgh-area journalist who's written about everything from school board meetings to Broadway performers. She was born and raised in the South Hills, studied at Point Park University and lives in Pleasant Hills with her husband and their daughter.