PittGirl celebrates the possible loss of a local monument. 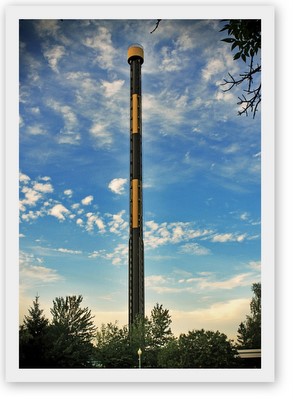 There’s a lot I love about Kennywood.

I love the food. Where else can you eat a plateful of Potato Patch fries smothered in cheese sauce and bacon, then wash it down with a funnel cake and deep-fried Oreos, and then test the mettle of your stomach by hopping on the Swing Shot?

I have a saying: If you don’t go to bed with intense heartburn and indigestion after a day at Kennywood, you did it wrong.

I’m going to have that put on my gravestone.

In addition to the food, I love the rides. Most of them.

Some give rise to irrational fear and anger. In days past, it was that Caterpillar ride. Do you remember that, those of you old enough to be allowed on my lawn? A heavy canvas fabric would close over you, trapping you in the the hot, dank, smelly belly of a giant caterpillar which would then race around a circular track while you questioned why you continued to partake in such a ride year after year. Who invented the caterpillar? Probably the same person who invented the Rotor, another ride I hated. Climb into a giant soup can and spin around so fast you get suctioned to the wall as the floor drops out from beneath you and the force of the Gs you’re pulling causes your body fat to become splayed in interesting yet grotesque arrays against the can.

These days, it’s the Pitt Fall that I hate. It’s not so much a fear thing, because I know that I’m very likely—hopefully, prayerfully—going to stop before I hit the bottom. It’s the interminable wait up top, suspended in the air above West Mifflin, anxiety rising in your belly as each second ticks by and you begin to wonder if the ride malfunctioned and you’ll be spending the next several hours perched up there praying the birds don’t come for your eyeballs. Just before the panic sets in, you plummet, and you get ANGRY.

Or at least I do. I don’t know why, but when I ride the Pitt Fall, coaxed onto it by nieces or nephews, I spend the fifty-minute (it seems) trip to the bottom in a state of rage I can’t explain. WHY AM I ON THIS? WHY AM I FALLING? WHO INVENTED THIS? I WOULD LIKE THIS TO STOP NOW. NOW. NOW? I HATE EVERYTHING ON THE PLANET.

So imagine my joy in learning that Kennywood is trying to sell the Pitt Fall!

There are some that are upset that the Black and Gold Tower of Terror and Inexplicable Rage is possibly going the way of the Laser Loop, but I say good riddance. I don’t find it iconic or a representation of our city. I find it a mocking reminder of what it feels like to plummet to the earth while cursing everything that enters my brain. I will gladly bid it adieu, not caring a whim that others see it as a part of Kennywood history.

Now if they try to sell the Jack Rabbit?

Want more PittGirl? Check out her heartfelt letter to Roberto Clemente from our July issue.

This article appears in the July 2011 issue of PittGirl.
Categories: PittGirl