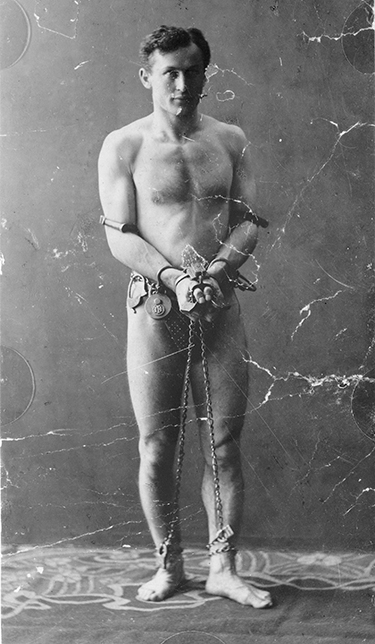 Harry Houdini — vaudeville headliner, one of America’s greatest magicians and surely the most famous escape artist of all time — had plenty of fans in Pittsburgh and came here many times throughout the early decades of the 20th century.

He was born in 1874 in Budapest, Hungary, but emigrated with his family to America when he was 4 years old. He grew up in Appleton, Wis., then moved to New York City; he began performing as a touring magician in 1894. He married a fellow young vaudevillian named Wilhelmina “Bess” Rahner when he was 20, and she remained his onstage assistant throughout his illustrious career.

The Houdinis’ first visit to the Steel City was in 1905 or 1906, after he had become renowned for getting himself free from chains, handcuffs and other restraints. He appeared at the Grand Opera House on Fifth Avenue, downtown, and dared anyone to try and tie him up in such a way that he couldn’t escape; of course, he successfully wiggled out of all attempts to shackle him.

But Houdini the master showman always was trying to complete more daring and dangerous feats of escape and survival. Around 1906, he started performing a shocking stunt: jumping off bridges while wearing handcuffs and tied to a rope, dramatically turning up the level of danger and suspense. Crowds weren’t always certain of his success. Yet he always freed himself from his fetters, even when submerged in cold river water.

Houdini’s first jump off the old Seventh Street Bridge (where the Andy Warhol Bridge is today) was on May 22, 1907. He repeated the bridge-jumping stunt on a much colder March 13, 1908; the superstitious magician was troubled by the number 13 appearing not just in the date but also in the number of letters he received that day and the number of his hotel room. He told the Pittsburgh Leader newspaper, “I feel nervous today. There is a goneness in my innards that isn’t pleasant.” He persevered — and it was reported that he exited from the Allegheny River at 1:13 p.m.

In 1916, Houdini — now 42 years old — returned to Pittsburgh to appear at the former Davis Theatre. He drew thousands of people into the street by hanging upside-down in a straightjacket on a rope in front of the offices of the Pittsburgh Sun newspaper at the corner of Wood Street and Liberty Avenue downtown. He wowed the huge crowd (and promoted his show) by successfully and safely wriggling out of the jacket.

In the 1920s, Houdini began to pay serious attention to the work of mediums, psychics and other dishonest people who claimed they had supernatural abilities. He worked hard to expose and debunk these charlatans everywhere, and one of his most successful direct challenges occurred in Pittsburgh on Sept. 18, 1925. He had offered $10,000 to anyone who could use supernatural powers to answer three questions that he had put into sealed envelopes. The Rev. Dr. Alice S. Dooley, then-pastor of the Pittsburgh Church of Divine Healing, foolishly agreed to go onstage at the old Alvin Theatre and use her purported special powers to pass Houdini’s test. Her answers never came close to what he asked in his secret questions. She was humiliated, and her followers were not too happy.

On Halloween 1926 in Detroit, Houdini died at age 52 from peritonitis, perhaps complicated by injuries from unexpected punches that he received from a student in Canada a few weeks before. His death and many aspects of his life still are scrutinized and studied by fans today.

This article appears in the March 2015 issue of Pittsburgh Magazine.
Categories: Rick Sebak