The National Football League Players Association's ongoing war with the NFL in general, and NFL Commissioner Roger Goodell in particular, continues to escalate –– and this time Harrison is among those being asked to lead the charge. 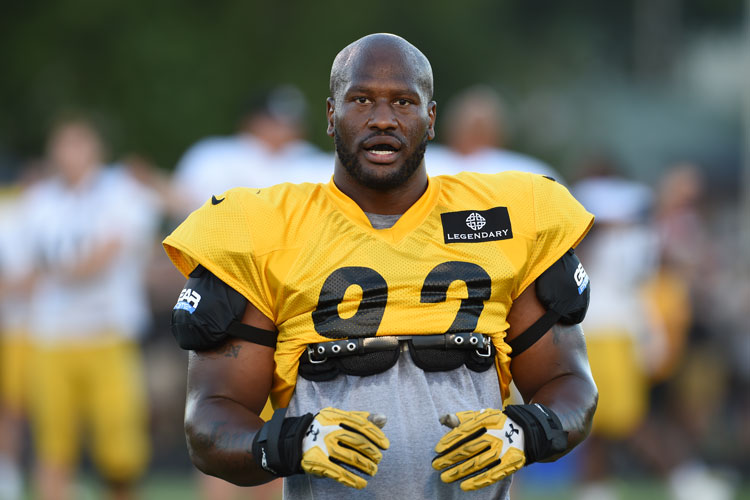 Before leaving St. Vincent College, the Steelers’ players in general and James Harrison in particular drew another line in the sand.

The National Football League Players Association's ongoing war with the NFL in general, and NFL Commissioner Roger Goodell in particular, continues to escalate –– and this time Harrison is among those being asked to lead the charge. He’s been summoned repeatedly, along with Green Bay Packers Clay Matthews and Julius Peppers and free agent Mike Neal, to appear before the powers that be in the league.

The NFL wants to thoroughly investigate a since-recanted report on a network that no longer exists about “potential violations of the collectively bargained Policy on Performance-Enhancing Substances.”

You’d think the random drug test Harrison submitted to at training camp on Tuesday, and any previous such endeavors, would have sufficiently answered any of the NFL’s lingering questions.

The NFLPA’s response has been that submitting to such an interview would be unnecessary, intrusive and a violation of the players’ rights.

So the players aren’t talking, at least not yet.

The NFL has said it would consider their continued refusal to do so through Aug. 25 “conduct detrimental,” and that it would indefinitely suspend any player not in compliance on Aug. 26.

Harrison has repeatedly insisted he’s clean. But he’s being advised not to submit to the league’s demands even though simply answering the league’s questions would presumably allow Harrison and the Steelers to put such drama in the rear-view mirror.

“James has never pissed dirty,” Steelers NFLPA rep Ramon Foster said. “Why would you want him to have a sit-down interview with you?

“And another thing, why wouldn’t Roger want to come to Pittsburgh? He’s making over $30 million a year. Bring your jet to Pittsburgh and meet with James, do it at the (Steelers’ practice) facility. Just come see him, how about that?

“The NFL can make it a lot easier if they just come off their high horse. Be on the same page with the players for once.”

So it’s not a matter of principle after all as much as it is home-field advantage.

On both sides of the argument.

The Steelers are staying clear of the controversy, at least publicly.

“That has nothing to do with us,” head coach Mike Tomlin repeated this week. “That’s between (Harrison) and the ‘PA’ and the league.”

The Steelers aren’t about to take sides against a league of which they are a member.

And they aren’t about to alienate their locker room by siding with management in this squabble.

But rest assured, all of this tumult will have everything to do with the Steelers if and when Harrison gets suspended.

And even Harrison knows the organization might eventually subtly suggest he do what’s necessary to prevent that from happening.

“We’ll deal with that when the time comes.”

When that times comes –– and it’s coming –– resolution might only be a phone call away.