As a part of its Kindness Movement, the Caileigh Lynn McDowell Foundation is encouraging people to hang hearts in their windows to express gratitude for essential workers. 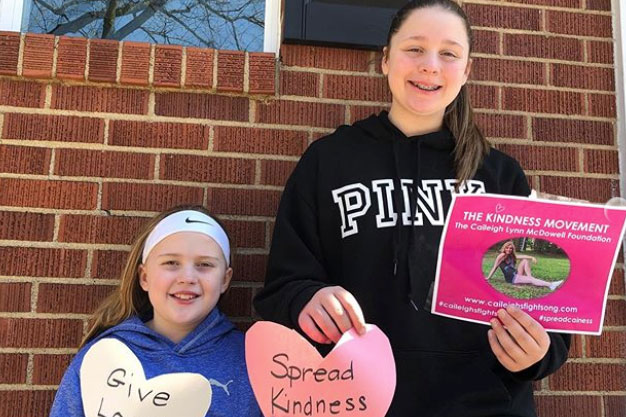 During this time of social distancing, you may notice handmade hearts hanging in windows of houses all over the city and on social media. This is part of the Hang a Heart in Your Window campaign, a movement to show appreciation and kindness to local frontline workers and first-responders.

After stay-at-home orders were issued in March, the Caileigh Lynn McDowell Foundation started this campaign as a part of its Kindness Movement. The foundation was formed in 2016 to honor the life of Caileigh McDowell, a 17-year-old girl who passed away her senior year of high school due to undiagnosed Crohn’s Disease after a 42-day battle in the hospital.

Lynn Banaszak, McDowell’s aunt and president of the foundation, says McDowell was one of the most generous and kind people she knew and that the Kindness Movement was inspired by her spirit.

“She had this beautiful, energetic way of making sure that everyone felt included, had a seat at the table and [that] people knew they mattered,” Banaszak says. “So when she passed away we decided to form the foundation to honor her lovely life and reach out to young people in ways that mattered to her.”

The Kindness Movement started in 2016 with the creation of Kindness Cards, which were distributed throughout the Pittsburgh community as a way to remind people to be compassionate and practice tolerance. Banaszak says the foundation helped distribute nearly 30,000 cards. But when people were told to shelter in place because of the pandemic, Banaszak says the foundation wanted a creative way to extend the principles of the Kindness Movement at such a difficult time.

“We came up with the idea that we can simply hang a heart in our windows to let people know that as they’re passing through the neighborhood on their way to keeping us safe that we were appreciative and that they [are] on our minds,” Banaszak says.

This campaign started between Banaszak’s friends and family, but since March, the movement has taken off. Banaszak says she has received hundreds of photos of heart displays from people as far as California, Florida, Georgia and Michigan. Whether it is a single paper heart with a kind message or an elaborate art display, Banaszak says this movement provides a powerful message and that it is important to appreciate the people who are helping to ensure everyone’s safety.

“On good days and challenging times, one thing that always matters is kindness and being loving to each other,” Banaszak says.