Plus, stretch out your Saturday morning with Bikram yoga and get your Broadway fill with 'Annie' at the CLO. 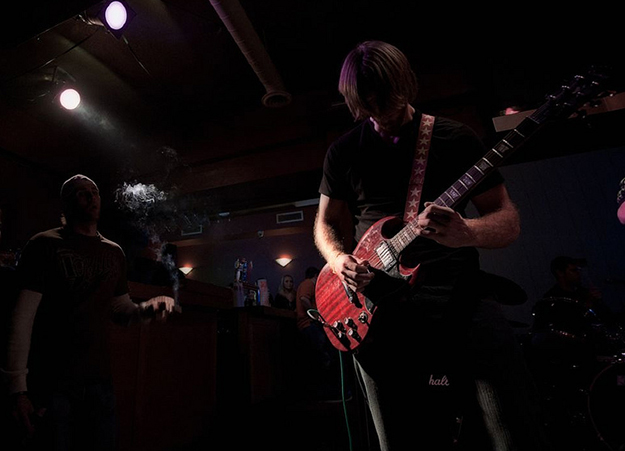 GUITAR: THE INSTRUMENT THAT ROCKED THE WORLD AT CARNEGIE SCIENCE CENTER
It seems that the prototypical Pittsburgh summer should come with a raging guitar soundtrack. Whether it’s the music accompanying a Pirates post-game fireworks spectacular, the sounds drifting over the hills of Burgettstown form the First Niagara Pavilion or just the tunes pumping out of a car stereo rolling down Penn Avenue, power chords and face-melting solos go quite well with a summer in the city.

Fitting, then, that the touring exhibit GUITAR: The Instrument that Rocked the World rolls into the Carnegie Science Center now through Sept. 30. You’ll trace the origins and history of the ubiquitous instrument, covering over 400 years of strumming and picking. Local and national acts will drop by through the summer to show what they can do, and you’ll get the chance to shred on the world’s largest guitar — big enough that kids can climb on it to pick out a tune! Make plans to check out this must-see exhibit now (just don’t make them for Saturday, when the Science Center will close to make way for a few other guitars — the axes carried by Kenny Chesney and Tim McGraw next door at Heinz Field.)

STRETCH OUT YOUR SATURDAY MORNING WITH BIKRAM YOGA
For those who might have shied away from Bikram Yoga before — the 105 degree room temperature isn’t everyone’s cup o’ tea, after all — Bikram Yoga Squirrel Hill is offering a happy medium for adventurous yoga-goers this summer. Rather than staying cooped up, Rebecca Rankin (owner of the Squirrel Hill branch) is holding class outdoors this Saturday from 1:30 p.m. to 3 p.m. in the Schenley Park Overlook. Whether you’re a newcomer or an established yogi, all levels and ages are welcome. Participants are asked to bring a $5 donation, yoga mat and food to contribute to a picnic following class. The park may be cooler than the classroom, but with the scorching heat lately you’re sure to break a sweat either way! Can’t make it this Saturday? The class will head outside again on July 28 and August 18.

GET THESE FREE CONCERTS ON YOUR CALENDAR
Speaking of musical extravaganzas, the list of world-class performers taking the stages at Hartwood Acres and South Park this summer is more impressive than ever. Both series are well underway, but not to worry; you still have the chance to see all-stars like Toad the Wet Sprocket, Sharon Jones and the Dap Kings, Lucinda Williams, Trombone Shorty and Orleans Avenue and Mike Doughty, among many more. Oh, and all those shows are free. Check out this week’s edition of After Dark to fill in most every Friday and Sunday night on your summer calendar!

ANNIE'S BACK
Forget about the Big Apple. You can get your fill of Broadway right here in the ‘Burgh when beloved orphan Annie visits Pittsburgh, starting June 29 at 8 p.m. If you’ve already got big plans for Friday night, don’t worry – the sun will still come out tomorrow (thanks to more performances through July 8.) For those of you who may not be familiar (and live under a rock), the play tells the story of an orphaned girl who escapes a depressing life under the care of the oppressive Ms. Hannigan.  Popular renditions that are sure to please include the endearing “It’s a Hard- Knock Life,” and the uplifting “You’re Never Fully Dressed Without a Smile.”

In Theaters: There’s a boatload of new flicks heading to Pittsburgh theaters this weekend, including: the Seth McFarlane (“Family Guy”) comedy Ted; Steven Soderbergh’s male stripper drama Magic Mike; weepy family drama People Like Us; guaranteed moneymaker Tyler Perry’s Madea’s Witness Protection; Lebanese drama Where Do We Go Now?; and divisive indie darling Lola Versus. PM Film Editor Sean Collier actually offered his opinions on Ted and Magic Mike this morning on the 102.5 WDVE Morning Show, in lieu of his regular Friday appearance; you can, however, still check out the written version of his reviews at facebook.com/seancollierpgh. He likes one of those two movies much, much more than he thought he would; find out which!

Whether you’re looking to escape the hustle and bustle of the city or simply find yourself in search of something fun to do outdoors, Destiny Hill Farm is the answer. Located in the sprawling hills of Washington, Pa., the 137-acre farm is hosting its first Lavender Festival on Saturday, June 30 and Sunday, July 1 from 10 a.m. to 5 p.m. Visit destinyhill.com for a full list of the day's itinerary, directions, tickets and more!

This article appears in the June 2012 issue of PMWeekend.
Categories: Things To Do