Growing Up In Knoxville: Tom Atkins

The actor developed a fearless attitude toward a bygone city bridge in the hilly neighborhood south of the Mon River. 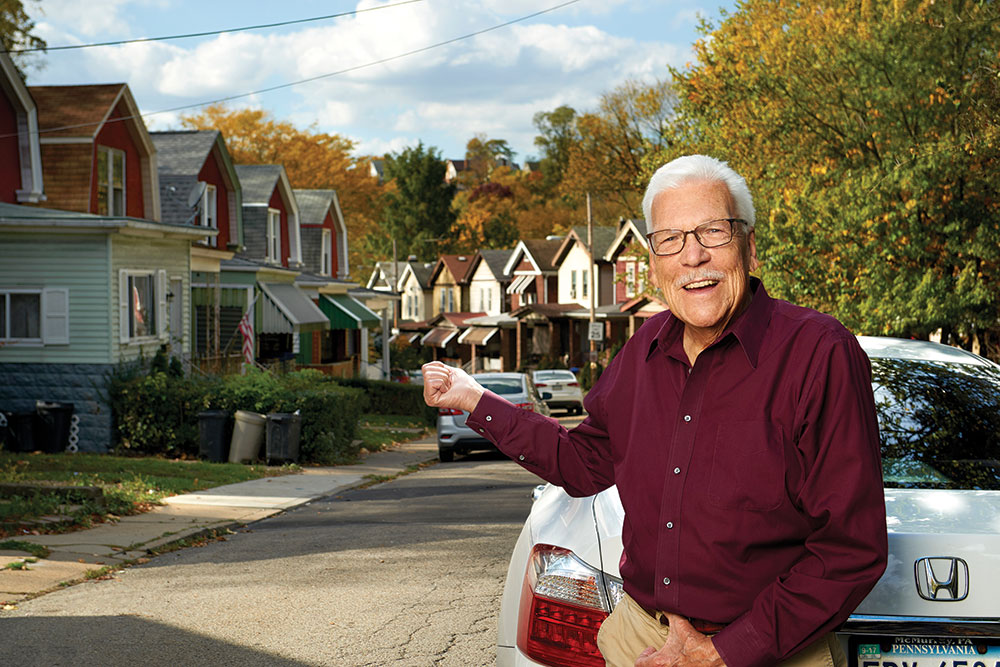 If, on one of several afternoons around the middle of the 20th century, you had been walking down Matthews Avenue in the city’s Knoxville neighborhood, quite a feat would have been occurring overhead.

Had you glanced up at the former Georgia Avenue Bridge, you would’ve seen a group of boys scampering from one side to the other. Not on the bridge, mind you — underneath it. These young daredevils, on a lark, were seeing if they could cross the perilous span by climbing on the support structures underneath the bridge itself.

Among the roster of urban mountaineers: a young Tom Atkins.

“We hung out on the bridge, naturally,” the accomplished actor remembers. “Somebody, I think, had died falling off the bridge once — or my Dad and Mom just made that up to scare us. But if they said it once, they said it two or three times a day when we were young: ‘Stay the hell away from the bridge, Joe Blow fell off that bridge when he was drunk and died.’

“I just thought it seemed like, if I’m told to stay away from somewhere, I just have to give it a go. And I just did one summer day; it worked out.”

The family chose Knoxville for its proximity to the former J&L Steel works on the South Side, where Atkins’ father, George, worked; at the time, a streetcar ride carried the elder Atkins from the family home on Bausman Street to the mill. “It was convenient. He would play softball down there,” at a field near the Birmingham Bridge. “I would watch him play softball with the mill team” before the team relocated to nearby bar Yarsky’s, where young Tom was permitted to sit at a table near the bar and have a Coke while the grown-ups laughed about the game.

The location made for a fun, if occasionally mischievous, upbringing for the Atkins children. Aside from scaling unsuspecting bridge supports, Atkins and his brother, Dick, could walk to the former Harris Mount Oliver Theater on Brownsville Road. “We used to go watch 17 cartoons on Saturday for a quarter, and usually a double-feature, maybe including a Western.”

The theater lasted long enough that Atkins’ face may have eventually adorned the screen he had watched as a child. The theater closed in 1983, by which time Atkins had appeared in films including “The Fog,” “Halloween III” and “Creepshow.”

Somewhere between his bridge-scampering days and his acting career, Atkins became a regular at the Triangle Bar, on the corner of Bausman Street and Amanda Avenue. “When I was a little older — and still too young to drink, but drinking anyway — we would hang out at the Triangle Bar … That was my first bar, kind of my favorite. We all went there — even my Mom and Dad went there.”

From a stool at the Triangle Bar, Atkins, who now lives in Venetia, Washington County, watched the Pirates win the 1960 World Series. He couldn’t quite keep up with some of his peers, however. “I was not a really good drinker at the time. I can’t say that I’ve gotten much better with all the practice of my octogenarian years — I was home in bed by 8 o’clock. All the other guys went out to the Southern Star or some of the other joints deeper into the South Hills. I was tucked in.”

The Triangle Bar is no longer open; a convenience store is there, now. In fact, many of Atkins’ childhood landmarks are missing; the Georgia Avenue Bridge was demolished in 1978. Good news for the parents of Knoxville; apparently the urge to cross the bridge on the wrong side used to be pretty tempting.