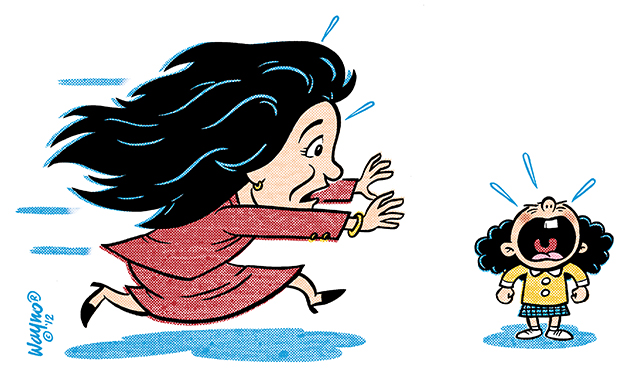 It’s not every day a regular ’Burgh girl like me finds herself in a room with Franco Harris, Sally Wiggin and Luke Ravenstahl (who, for the sake of propriety, will not be referred to as “Lukey” or any other term of endearment I’ve previously coined).

In 2009, when my husband held a private opening for Las Velas, being the amazing party planner I am — “Try pairing a platter of nuked Lil’ Smokies with colorful toothpicks,” is what I would say jauntily to the camera if I had a show on Food Network — he put me in charge of the guest list, which I filled with family, friends and a few local celebs.

Invitee Dok Harris couldn’t attend but sent his father, Franco Harris, in his place. That’s like inviting Malia Obama to a birthday party and having Barack show up instead. It wasn’t a bad tradeoff.

As I stood outside the restaurant that day, I spied the mayor’s chief of staff, Yarone Zober, approaching. He had the mayor with him, and Ravenstahl had a posse. Ravenstahl had only recently learned the name of the little snot who had been writing anonymously for three years about his failings, creating drinking games about him and giving him DJ names like Hizzy L. Rave — her name was Virginia Montanez.

I felt the bottom drop out from my stomach and wanted to flee.

Ravenstahl and crew approached in slow motion while a banjo played staccato, and my watch reset itself to high noon. I watched carefully for the slightest hint of motion to indicate a weapon was about to be drawn. It wasn’t. The mayor was gracious, checked his weapons and horse at the door, tipped his hat, and moseyed on in.

Later, I stood inside and looked around — my family, our friends, Sally Wiggin, Franco Harris, Mayor Ravenstahl. My head spun and then it swelled. I basked in the moment, letting my ego rear up and frolic through the idyllic wildflowers of self-satisfaction and smugness.

Then a scream ripped through the air.

I froze. It was the angry scream of my 2-year-old daughter, who normally followed such noise with a temper tantrum. There was no telling what had upset her — it literally could’ve been anything.

I rushed to intervene, grabbing her from the floor and marching with her through the restaurant while she squirmed and wailed as if I were kidnapping her from the park. We blew past Sally Wiggin, Franco and his wife, and the mayor and his posse. On I rushed, looking like a farmer trying desperately to get a grip on a shrieking, muddy piglet.

It was in the restroom that I finally expelled the breath I had been holding and looked in the mirror to find that my daughter was as bare-bottomed as the day I birthed her. I gaped in the mirror at the picture we presented — me, frazzled and sweaty, mascara running, desperately holding a squirming red-faced feral childbeast whose bare butt was on display for all to see.

To this day, I do not know what happened to her diaper. Did she take it off and toss it away like some illicit contraband? Did I forget to diaper her in the craziness of the evening?

I’ll never know, but I do know I learned a lesson I will never forget — one worth sharing: Stay humble, or the universe will find a painfully hilarious way to humble you.

But there’s a nice Malia/Barack-esque trade-off: Being humble doesn’t just get the universe off your back — it makes you a better friend, a decent human, a good neighbor and, above all else, a really down-to-earth Pittsburgher.

And that’s worth bragging about.

This article appears in the July 2012 issue of Pittsburgh Magazine.
Categories: From the Magazine, Hot Reads, PittGirl