Greek yogurt is suddenly trendy, and many new yogurt brands promise extra health benefits...but this time-honored dairy product is hardly a new kid on the block.

Yogurt might be an ancient food, but right now it’s having a modern renaissance. Call it globalization or call it marketing, but there have never been so many choices. Once-exotic Greek-style yogurt, as thick and rich as sour cream, is now easy to find. There’s light and creamy “Australian-style” yogurt. Regular yogurt comes in “healthy” versions with extra fiber or special probiotics, “calming” flavors such as plum-honey-lavender and “decadent” dessert-style chocolate and caramel flavors.

Yet no matter the bells and whistles, fundamentally, yogurt is a simple fermented milk product. It is thought to have originated in the hot climates of central or western Asia. One hypothesis is that it was discovered after a desert nomad stored milk in a goat-skin bag for a journey; the heat of the sun and the bacteria in the bag curdled the milk, and a great discovery was born.

Another theory holds that yogurt was discovered earlier, around the time of animal domestication during the Neolithic period, when a surplus of milk left out in a clay pot fermented. Either way, the food quickly became a staple in many ancient cultures, prized as much for its tart flavors as for the fact that it keeps longer than fresh milk.

According to legend, the Abraham of the Bible was taught how to make yogurt by an angel.

Yogurt can be made from many types of animals, including cow, goat, sheep, mare, water buffalo, camel and dri (female yak). Products made with it, such as yogurt drinks or cheese, are familiar in the cultures where yogurt has been consumed for millennia, from India and the Middle East to Turkey and the Balkans. (The term yogurt is a Turkish word adopted into English.)

The health benefits of yogurt have long been renowned. Everyone from ancient Greek historians to medieval Islamic physicians wrote of yogurt’s soothing and purifying effects on the intestinal tract. To the native peoples of the Americas, on the other hand, yogurt was completely unknown. Its slow introduction in the United States came mainly via immigrants from the Middle East.

In the early 1930s, the first yogurt dairy in the United States was founded in Massachusetts. Using yogurt cultures that she brought from her native Armenia, Rose Colombosian founded the Columbo brand. First distributed by horse-drawn wagon, it evolved into a big business by the 1960s, when the health benefits of yogurt gained a following. 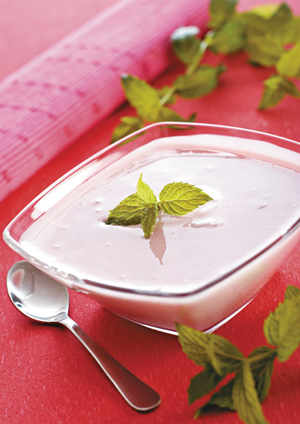 Eventually, yogurt dairies cropped up around the United States, and it became a familiar staple for people of all ages. Today, whether you grab a sweetened, fruit-on-the-bottom yogurt as a snack or use highly versatile Greek-style yogurt in recipes, one thing is certain—there is so much variety that you are bound to have more than one favorite.

Yogurt is an excellent source of calcium, is high in B vitamins and is a good source of protein, but its most attention-grabbing health claims relate to “live and active cultures,” the living organisms that convert pasteurized milk to yogurt during fermentation (also called probiotics).
FDA regulations require that all yogurts be made with active cultures. Only those that are not heat-treated, however, retain live and active cultures when they reach consumers. Buy brands such as Stonyfield Farms that clearly state they contain probiotics, or look for the National Yogurt Association’s (NYA) Live & Active Cultures seal.

The health benefits of the cultures aren’t entirely proved, but research indicates they contribute to intestinal health and may have beneficial effects on the immune system and cholesterol levels.

The yogurt primer below offers more detail on varieties you may want to indulge in—for health reasons and simply because they’re delicious.

Greek Yogurt Thick and creamy Greek-style yogurt owes its richness to an Old World straining method that removes whey from the yogurt. Even when it’s 0 percent fat, it has an indulgently rich quality. It also has about twice the protein of regular yogurt, less lactose and fewer carbs.
The most widely available brand is Fage Total, which comes in full fat or reduced fat. If you prefer to buy organic, check out Stonyfield Farms recently introduced Oikos Organic Greek Yogurt, with 0 percent fat. The classic way to enjoy Greek yogurt is drizzled with honey. Its unique consistency makes it a great addition to recipes.

Regular Yogurt As with all dairy products, try to buy organic when possible. Nonfat or low fat is most healthful. A few delicious organic brands include Wallaby Yogurt, a super light and creamy yogurt described on the label as “Australian-style”; Stonyfield Farm and Rachel’s Yogurt, recently introduced by health-food giant White Wave (owners of Horizon and Silk soy milk), which specializes in unusual flavors such as plum-honey-lavender.
Of the nonorganic brands, Yoplait offers a wonderfully smooth custard-style yogurt that’s a crowd-pleaser; it also now offers new Fiber One yogurts. Dannon is reliably delicious, and its Activia line—memorably advertised by actress Jamie Lee Curtis rubbing her tummy and talking about her occasional irregularity—is loaded with live organisms to supposedly ease some digestive concerns.

Frozen Yogurt Frozen yogurt first became popular decades ago as a low-fat dessert; it varies in taste, texture and healthfulness. Flavors from a local shop like Dave and Andy’s Ice Cream & Yogurt (207 Atwood St, Oakland; 412/681-9906) scratch the same itch as ice cream while delivering less fat (not always fewer calories, however).
Whether frozen yogurt retains live and active cultures depends on how it’s made—also, some manufacturers add extra probiotics. For gourmet frozen tart yogurt with an extra-healthy spin, visit Karmic Yogurt in Shadyside (731 Filbert St., Shadyside, 412/567-3959), which opened just last year: Its yogurt, in a trendy style that originated in South Korea, is extremely low-cal (less than 1 gram of fat and 32 calories per ounce) and is packed with live probiotic cultures.

Yogurt first gained world renown as a health food in the early 1900s when French Nobel Prize-winning scientist Ilya Metchnikoff investigated why a segment of country folk in Bulgaria had extraordinarily long life expectancy. (They lived to an average of 87 years as opposed to 48 years in the United States at that time.) Metchnikoff concluded that yogurt was responsible for their robustness and longevity.

In many cultures, bacterial yogurt “starters” were handed down through generations much like treasured recipes.

This explains why, in 1919, a small company called Dannon started selling plain yogurt at local pharmacies in Spain as a traditional Bulgarian preparation that assured a long and healthy life. In the 1930s, the company found new success in France then tried to break into the American market without luck.

Eventually, following the lead of a Czechoslovakian dairy that conceived sweetened, fruit-flavored yogurt, Dannon introduced strawberry yogurt—and sugar-loving American consumers were hooked. This genius move ultimately transformed yogurt from being identified solely with its health benefits into one also associated with pleasure and indulgence.

This article appears in the March 2010 issue of Pittsburgh Magazine.
Categories: Eat + Drink Features, From the Magazine