Permanent three-day weekends. Temporary assignments in Hawaii. A company trip to the Tour de France. Where do you find a job with perks like that? Right here in the ’Burgh, where happy campers nominated their companies for our first-ever Great Places to Work survey.

Pittsburgh magazine’s “Great Places to Work” rankings were compiled by Next Generation Consulting from an anonymous 40-question survey that had to be completed by at least half of a company’s employees.

The survey didn’t differentiate by types of businesses, just size: those with more than 100 employees and those with fewer. Participants had to choose their levels of trust, management, professional development, connections, rewards and life-work balance. To validate the results, the survey also asked if respondents would recommend their company to other job seekers.

Next Generation experts consider a score of more than 80 percent to be exceptional; the lowest score that any of our winners received was a remarkable 87.9 percent.

Here are the five large companies that made the cut. Or, check out the main feature with the large-company winners, honorable mentions and methods to selecting our first "Great Places to Work" honorees.

What it is: The Verona dental practice of Dr. James L. Petraitis, D.M.D.

Primo perk: Having Fridays off, so employees have a permanent three-day weekend.

“It’s all teamwork here,” says dental hygienist Lorie Fornataro. “As I fill the coffeepot, someone else is opening the coffee.”

While the only golfer in the office is Petraitis, the whole staff enjoys the golfing paraphernalia that adorn the walls, plus the festive annual holiday parties (last year’s held at—you guessed it—Oakmont Country Club).

To spread the healthy smile message, the office sends bags of free toothbrushes to the nearby Forbes Elementary School.  A friendly “morning huddle” helps staffers coordinate their efforts. And when someone wished out loud for a lunchtime picnic table, one appeared outside the office the next day.

What it is: The downtown Pittsburgh franchise of the nationwide company—a communication services provider, offering anything from design and printing to bindery and promotion solutions.

Kristen Massucci, of Kennedy Township, enjoys the fast pace of Alpha’s Penn Avenue operation in the heart of the Cultural District. When Alpha goes the extra mile to deliver on deadlines, the local theater employees often express their appreciation with free tickets.

Other perks come from president Clare Meehan when the team meets gross margin and revenue goals every month in the quarter. “At the end of quarter review, we divvy up the proceeds and all get a share of the pot,” says Massucci. On average, each staffer nets about $500.

When the shop posted a record month in this year’s second quarter but failed to meet some quarterly benchmarks, Meehan went a step farther: She simply doubled the quarterly bonus for everyone. Nice.

What it is: The Wexford office of the largest commercial tenant-representative company in the United States. Major local clients include Allegheny Technologies, the Pennsylvania Cyber Charter School, Vector Security and Wabtec.

Best benefit: Opportunity for equity in the local arm of the company.

“It’s like ‘Friends’ 10 years later,” says AJ Pantoni, describing his office in terms of the famous sitcom. The 45-year-old senior advisor at CresaPartners puts his finger on the appeal of his seven-person office when he deadpans, “It’s not like family because we have no parents here.”

Pantoni and two co-workers bonded by training for the Rachel Carson Trail Challenge, a grueling 35-mile hike on the Rachel Carson Trail. Inside the office, managing principal Kim Ford provides generous customized incentives. “My wife and I think Las Vegas is the best restaurant town in the world, so Kim treated us to dinner every night of our stay,” says Pantoni.

For co-worker Dani Kazienko, a family weekend at the Nemacolin Woodlands Resort was just the ticket. And yes, the entire staff packs Nerf guns. Beware.

What it is: Danaura Enterprises owns NutriFarmacy, a Hampton pharmacy specializing in nutrition, wellness and health care. Pharmacist Dan Wagner opened the business in 1997 to integrate holistic and natural remedies—including those based on his rainforest field research—into patient care.

Debbie Damski has learned a lot in 18 years as a pharmacy technician at NutriFarmacy—not just job basics, but also a wealth of information on natural remedies. “Dan guides us in the right direction to keep us healthy,” she says.
The small staff appreciates his easygoing style and frequent thank-you notes. While Wagner closes the office on Sundays to give the group a break, they often swap Saturday hours amongst themselves to accommodate family events.

What it is: A brainy, high-tech outfit in East Liberty, which builds projects that link the digital and physical worlds from Pittsburgh to Johannesburg, South Africa. Deeplocal’s real-world apps for mobile and Web technologies put it with heady company: Nike used Deeplocal’s Chalkbot to write inspiring messages, which were texted or Tweeted from fans all over the world, on the path of the 2009 Tour de France. For Nike’s recent 2010 World Cup promos, Deeplocal’s technology allowed fans to send headline predictions about their favorite players that were projected on Johannesburg’s largest buildings—and then morphed into player images.

Back at Deeplocal’s funky East End digs, the young staff starts the day with music ranging from rap to heavy metal. “I love it,” says Dimitry Bentsionov, the 25-year-old lead Web developer, of the company’s expansive new space on Penn Avenue, which has plenty of square footage to park bikes.

What it is: A full-service advertising, public relations and graphic-design company in the North Hills, serving clients like the Hilton Garden Inn at Southpointe, the Airport Doubletree and the Sewickley Spa.

Primo perk: Everyone works from home.

At Krol Media’s virtual office, co-workers share tasks and projects online. Patricia Martin treasures that flexibility as the company’s administrative assistant. At 76, Martin finds that a flexible schedule allows her to arrange both medical treatments (she’s a 17-year cancer “warrior”) and rehearsal time with the Sounds of Pittsburgh Chorus, which is associated with Sweet Adelines International.

“We do everything for clients from our homes,” says Martin. “It’s just super. Once a month, we have our big staff meeting. Afterward, we just pick up our laptops and toddle off.”

MANY (Mid-Atlantic Network of Youth and Family Services)

What it is: A regional network that coordinates services for at-risk families and children. Recognizing that troubled youth may need help from agencies—ranging from mental health, education, child welfare and juvenile justice—MANY coordinates training and advocacy for those service providers.

Best benefit: A 15-percent bonus on top of salary that’s applied at the employee’s discretion to health or life insurance, retirement savings or child care.

Cynthia Weiman Shields, training and technical assistance specialist for MANY, is a full-time staffer and new mother. She’s working from home these days—a “great solution” as she bonds with her son, Joey. And with a ratio of 10 women to one man in the office, she’s received plenty of support for the adventures of pregnancy and motherhood from her co-workers.
One MANY ritual—hiding a tiny cardboard bird in a co-worker’s space—helps create a cohesive workforce. The finder moves it on to the next spot.

“Somehow this brings new people into the fold. It’s a way to be playful and help people to feel part of the ‘game’ of work,” says Anita Lichman, director of business operations.

Neighbors in the Strip

What it is: The community-development group in the Strip District. To see its impact, look up: the Romare Bearden-like mural currently being created on the Hermanowski Building at 1907 Penn Ave. is a colorful example of the group’s outreach.

Best benefit: Flexible work hours and pride in preserving one of the city’s coolest neighborhoods.

“What’s a benefit?” jokes Cynthia Helffrich, communications manager for Neighbors in the Strip. She readily admits that tiny nonprofits like hers aren’t lavish with company perks. But like her co-workers, she believes that the Strip is “one of Pittsburgh’s great treasures.” She is proud that Neighbors in the Strip has been named a national Main Street organization by the National Trust for Historic Preservation.

A longtime volunteer with the organization who joined the staff three years ago, Helffrich loves schmoozing with local merchants and having business meetings over pancakes at Pamela’s P&G Diner. With the opening of the new Pittsburgh Public Market in the old Produce Terminal, Helffrich is looking forward to even more local food shopping on Smallman Street. 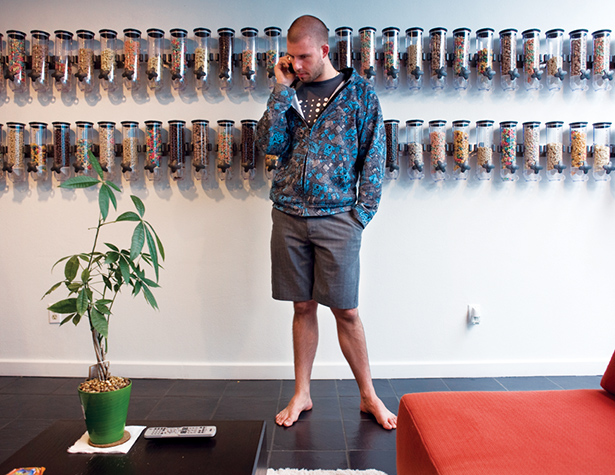 Employees can munch at the cereal bar on the wall.

What it is: A Shadyside start-up that offers online and other ticketing services for events throughout North America (and recently, Australia). ShowClix delivers tickets via mobile multimedia messaging service (or MMS) to customers’ cell phones, creating ticket scanning functions for smartphones like the Android and plugging in to social networking sites.

ShowClix CEO Joshua Dziabiak is 23—younger than the average staff age of 25. With a work-hard, play-hard vibe, the company arms employees with Nerf guns to blow off steam, and game nights include Rock Band competitions. “I’m sort of on a Honeycomb kick right now,” says account manager Erin Borger, 23, who loves the cereal bar and the daily pace at ShowClix, where revenues grew from $4.5 million to $8 million in the past year. The casual employees schedule lunches on the roof, but Borger also likes slipping out to visit Walnut Street boutiques. 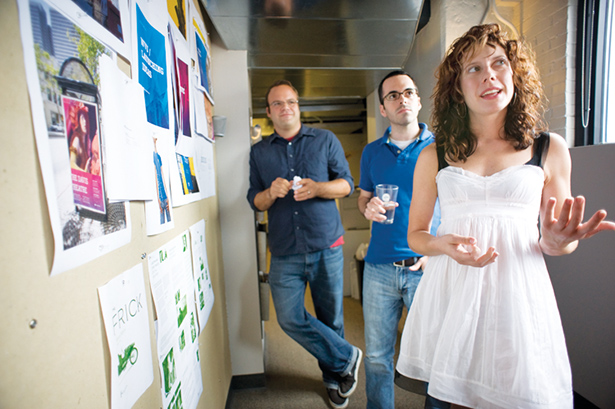 What it is: A multidisciplinary, strategic creative and branding company on the Northside. One national campaign that’s creating a buzz: the company’s recent work for Las Vegas’ new Mob Museum that has the tagline “You didn’t see anything.”

“We argue like family, and we laugh like family,” says Scott Krebs, director of interactive technology at Wall-to-Wall. “We know when we can bug each other and when we can’t—it’s energy I can feed off of.” When he needs quiet time, he dons “the cone of silence”—the office’s big hat that wards off interruptions.

Krebs also points out that when he needed time off to adopt three children from Colombia, Wall-to-Wall gave him one month off to travel there and unravel the logistics. “Compared to the experience of other adoptive parents, that was pretty amazing—having the backup and support,” he says. “When we got back, waiting on our doorstep was a swing set! And one of the partners helped me put it up.”

Christine H. O’Toole last wrote about hot college majors for the magazine’s August issue. She considers her home office to be a great place to work.

This article appears in the October 2010 issue of Pittsburgh Magazine.
Categories: Community Feature