The popular Christmas song, “It’s a Marshmallow World,” rings true even in summer. The fluffy, white treats star in everything from ice cream to fudge, and roasting them is the best part of a campfire. Considering how much Americans love marshmallows (we consume more than 90 million pounds of them per year), it might even seem like we invented them. However, that honor goes to ancient Egyptians, who mixed honey with the root sap of the marsh mallow plant (which produces a sticky, white, jelly-like substance) to make the treat. Centuries later, doctors, who were convinced of the marshmallow plant’s healing powers, used similar concoctions as a cure for sore throats.

In the 1850s, the French transformed this “medicine” by figuring out how to froth egg whites, water and sugar; bind the mixture with root sap; hand-mold the sweets; and dust them with cornstarch. During the process, they created the modern marshmallow, which was mass-produced shortly after (and the recipe was slightly altered, subbing in gelatin for the sap). In 1927, the recipe for a s’more first appeared in a Girl Scout handbook. Within a few decades, Kraft’s brand of Jet-Puffed marshmallows, made with a patented process that infused air into the marshmallow during manufacturing, hit the market. The spongy, mass-produced squares became a cookout essential and a pantry staple.

Of course, it’s also possible to make marshmallows at home. If you’re intrigued, check out Marshmallows: Homemade Gourmet Treats, in which author Eileen Talanian offers easy step-by-step recipes and inspiration. Whether you make your own, opt for the traditional store-bought version or shop for creatively flavored treats in the Strip District, don’t let August pass by without having a marshmallow—and while you’re at it, sharpen those roasting sticks.

For this indulgent recipe from the Pittsburgh Marshmallow Factory, co-owner Debbie Steinberg recommends using bananas-foster marshmallows, but just about any flavor will produce delicious results.

Preheat oven to 250 degrees. In a large bowl, combine one-and-one-half cups milk or half-and-half, six large eggs, two tablespoons pure vanilla extract, two teaspoons cinnamon and a pinch of salt. Whisk together vigorously. In a 9×11 pan, place a single layer of six to eight slices of hearty bread (use day-old for the best results). Pour the liquid mixture over the bread and let sit for five minutes on each side (use a spatula to flip). Melt four tablespoons of unsalted butter over medium heat in a large pan or griddle. Turn heat to medium-low, and fry each slice for two to three minutes per side (or until golden brown). Place the French toast on a baking sheet as it finishes cooking; when all the pieces are done, top each one with a dab of butter and a fresh marshmallow, and cook in the oven for about seven minutes (or until the marshmallow melts). 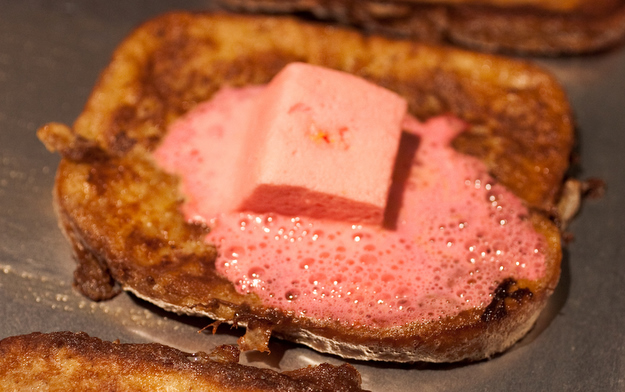 Marshmallows don’t have to be sweet: A recent addition to the Pittsburgh Marshmallow Factory’s lineup contains a fiery hot-sauce that’s made of ghost peppers.

“Since sugar is a natural antidote to heat, this marshmallow packs in more spicy flavor than you’d experience if you ate a ghost pepper straight,” says Debbie Steinberg. “Half the people like them for the flavor; half the people buy them to trick their friends. Whatever works!”

She recommends using marshmallow varieties like this in spicy, Mexican-style hot chocolate or as a chili topping. Steinberg says that customers surprise her with new ideas all the time—one recently told her that she liked to melt the fiery marshmallows and make fondue.

The fluffy, handmade marshmallow squares from the Pittsburgh Marshmallow Factory, packed with unexpected flavors and textures, are completely different than the white cubes sold at the supermarket. Factory co-owners Chris Momberger and Debbie Steinberg originally created the homemade treats in their kitchen before setting up a temporary stand at the Pittsburgh Public Market last November; after receiving a positive response from patrons, the pair turned their hobby into a business. Today, you can visit their booth to sample all kinds of flavors. We spoke to them to find out what makes their treats so special.

Fresh is Best
What immediately sets homemade marshmallows apart from commercial versions is freshness. Steinberg points out that when you pull a marshmallow from a store-bought bag, it already has crust on it. “Ours don’t develop any crust for a month at least, so they retain that very fresh melt-in-your-mouth quality,” she says. Then there are the flavors: Best-sellers include coconut, caramel-coffee, bananas foster, cookies n’ cream and vanilla. Around the holidays, you’ll find specialty flavors like pumpkin spice and peppermint. They even created a Guinness marshmallow for St. Patrick’s Day, which surprisingly tasted rather delicious, says Steinberg. At Easter, she crafted marshmallow birds and sprinkled baby-blue-colored sugar on top and called them “Tweeps.” The stand offers about 10 flavors on any given weekend, plus a few mini-marshmallow varieties and s’mores made with crunchy, homemade graham crackers.

Mixing Magic
Marshmallows’ height or fluffiness come from whipping sugar syrup with gelatin—you need a certain amount of protein to maintain the height. The basic recipe—which includes sugar, corn syrup, gelatin, vanilla and a pinch of salt—is very simple, but the candy-making process can be temperamental. Steinberg laughs as she remembers the couple’s transition from cooking at home to moving production to an industrial kitchen with new equipment. “We had a week of mistakes,” she says. Steinberg uses a pizza roller to cut trays of homemade marshmallows—a handy tip if you’re making them at home. (If you’re cutting individual marshmallows into smaller pieces, try using kitchen shears instead of a knife.)

Easy to Eat
Homemade marshmallows react to heat the same way as store-bought ones. You can use them in Rice Krispie Treats or roast them over a campfire (and yes, they will melt if you leave them in a car that’s in direct sunlight). Try substituting the tiny treats for ice cream: Cinnamon marshmallows melted over apple pie or berry crumble taste delicious. If you can’t figure out what to do with a particular flavor (like bacon-maple or East End Brewery’s Big Hops), Steinberg has an interesting notion: “People have a hard time saying, ‘I’m just going to eat a marshmallow plain,’” she says. “But it’s actually a great idea.”