Western Allegheny Community Library in Oakdale is the latest Pittsburgh-area library to forgo overdue fines for all books, and other materials. 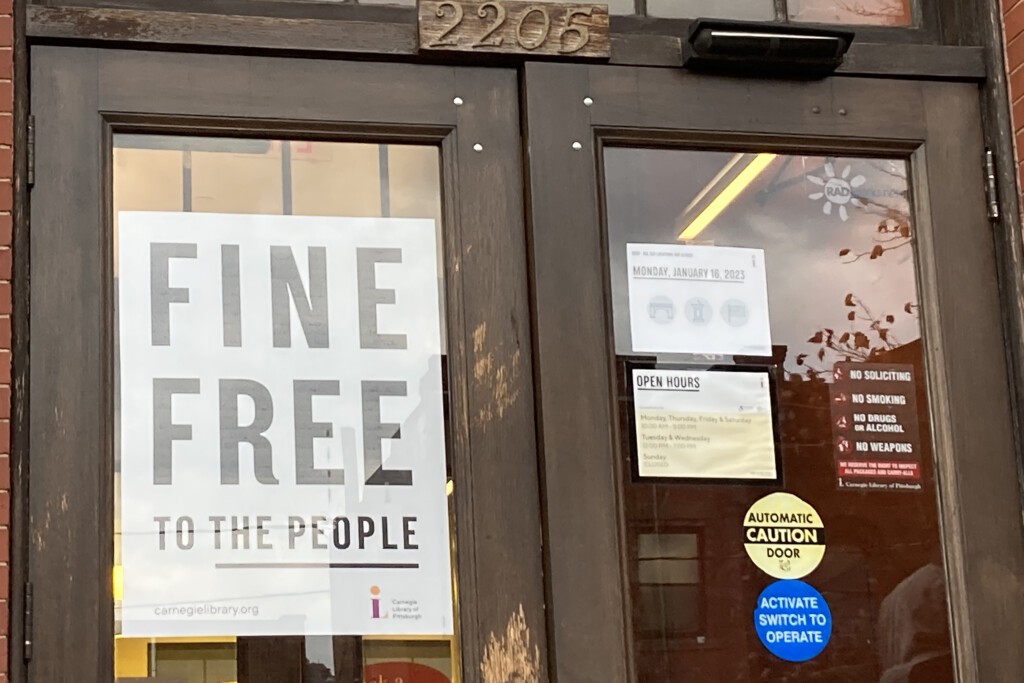 PHOTO BY DENISE BONURA | PITTSBURGH AREA LIBRARIES, LIKE THE SOUTH SIDE BRANCH OF THE CARNEGIE LIBRARY OF PITTSBURGH, HAVE GONE FINE FREE FOR PATRONS.

Western Allegheny County Community Library in Oakdale is going fine-free in 2023, joining numerous other local libraries that have eliminated overdue fees in recent years. This means the library will no longer charge overdue fines on any library materials borrowed.

“Library fines are a barrier to service. They affect everyone, but disproportionately low-income residents and their children,” says Western Allegheny Library Director Amy McDonald. “We determined that providing free access was far more important.”

The importance of accessibility outweighs the small percentage of revenue that fines brought in, she adds. The fines have made up less than 0.005% of the library’s overall budget.

All items checked out and returned to the Western Allegheny library will not have overdue fees even if the item was checked out from another library or returned to another library. The library — which primarily serves North Fayette, Findlay and Oakdale — also is eliminating all old debts in an effort to invite more patrons to visit.

The decision by Western Allegheny to eliminate fines follows a move by — so far — 31 of the 46 libraries in Allegheny County. The Sewickley Public Library, for example, went fine-free on Dec. 1, 2022.

Amy Anderson, CEO of the Allegheny County Library Association — which includes the 46 member libraries with more than 70 locations, including the Carnegie Library of Pittsburgh’s 19 locations — says that removing fines has resulted in more books being returned at the libraries that have made this change.

“So now we’re seeing more books being returned because there’s not that stigma of a fine hanging over their heads,” Anderson says. “People are making better use of the library and getting more of what they need from it.”

The Carnegie Library of Pittsburgh introduced the fine-free concept in pilot programs in 2019 at its branches on the North Side, East Liberty and Knoxville. The system made it permanent for all city locations on Jan. 25, 2022.

“What we’ve really seen is a shift in our customer’s relationship with the library,” Morphew says. “We’re seeing library card holders who haven’t been active users returning to the library since going fine-free”

Since CLP waived nearly 2,200 accounts registered to children and teens last January, there has been about 8.5% increase in returning patrons who had not been using the library due to those fines, Morphew wrote in an email.

Fines undeniably generate a source of income for libraries, but Morphew says it is not as much as people think. Every year, there is less dependence on fine revenue.

“Fines generate less than 1% of our annual budget and we know that income from overdue fines decreases every year,” Morphew says. “The process has been moving away from relying on overdue fine revenue.”

Fine-free does not mean responsibility free, however. Libraries do expect patrons to return materials in a timely manner. Policies vary from library to library, but if a book is overdue by more than 60 days at the Western Allegheny library, it is considered lost and the library will charge a lost fee, McDonald says.

Anderson says that if a book is not returned to one of the fine-free libraries in the ACLA, then a bill will be sent to the patron for the cost of the book. Sometimes the bill serves as a reminder and if they can bring the book back, no fine will be applied. After a number of years, if a book is still not returned, the library will determine whether to replace the material, with the cost coming out of the book budget.

Morphew of the CLP says she is excited to see that going fine-free has made the library more accessible and equitable.

“We heard a lot of really great stories from community members who were not only able to check out materials for the first time, but learn about our other services as well. We had customers coming in for resume assistance or job finding assistance,” Morphew says.

“This has been a way to more equitably serve our community.”