Got a Big Idea?

A new nonprofit has a (tiny) check for you. 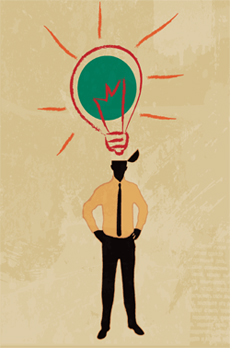 Are you among the many talented Pittsburghers who have an awesome project idea — and a limited budget? Fear no more, thanks to Matt Gaston and Mike Capsambelis. The pair co-founded Awesome Pittsburgh, a nonprofit that hands out a $1,000 grant each month to help turn big ideas into realities.

“Pittsburgh is the perfect place for this; there is so much community pride,” says Gaston. “The response has been enormous, and the ideas have been great. Our trustees are an amazing group — they are committed to this project.”

For artists, inventors, dreamers and creators, Awesome Pittsburgh could be the endorsement that gets an idea off the ground — particularly with its fast, easy process designed to quickly disburse funds. Applicants complete an online proposal, explaining their concept and how the money would be used to implement it. The nonprofit’s board of trustees meets and announces a winner every month. Winners are then awarded with a ceremonial “micro-check,” a 2-inch check that represents the concept of a micro-grant.

Awesome Pittsburgh’s first recipients provide a good example of the diverse ideas it can put into action. For example, the Pop-up Co-op, created by Talia Piazza, Christina Robertson and Grant Ervin, plans to repurpose empty storefronts to help revitalize neighborhoods; the space would accommodate four to five local vendors and offer seating room for guests. Pop-up Co-op will mimic an indoor farmers market, giving each vendor a place to sell homemade and organic foods. And its first property will be located in Morningside.

Meanwhile, Murphi Cook’s “Puppet Photo Booth” will appear in a weeklong installation at Market Square. From the outside, it will look like an old-fashioned photo booth; however, once you step inside, a real puppeteer (Cook herself) will appear to perform a seven-minute show and snap your pic (to live up to the booth’s promise, of course).

If you’ve got your own million-dollar concept in need of that last $1,000 boost, check out awesomepgh.com. A tiny check could be headed your way!