Stories from Pittsburgh brides who broke from the norm. Plus local experts share advice on how to get creative with a wedding standard: your guest book. 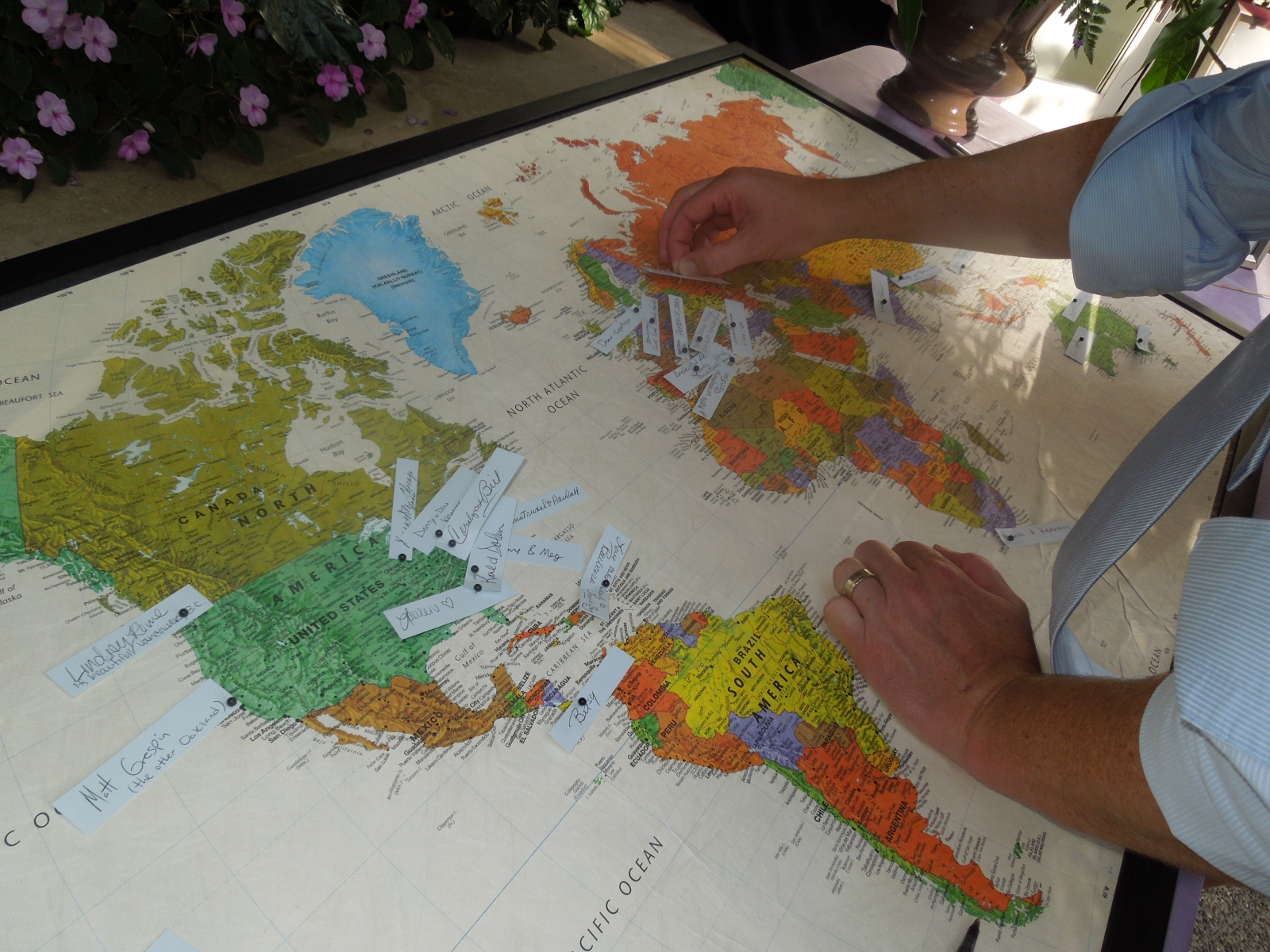 Brides looking to stray from a traditional guest book format are finding creative ways to keep a record of their wedding guests that go beyond a simple signature.

“Make it about you. Make it personal,” Erin Calvimontes, owner of Divine Celebrations, advises.

Putting a creative spin on the traditional feature allows attendees to tell stories of where they came from or how they met the bride and groom, Calvimontes says.

At one wedding she planned, guests wrote their names on pieces of paper and pinned them over their hometowns on a map to show how far they traveled for the wedding. 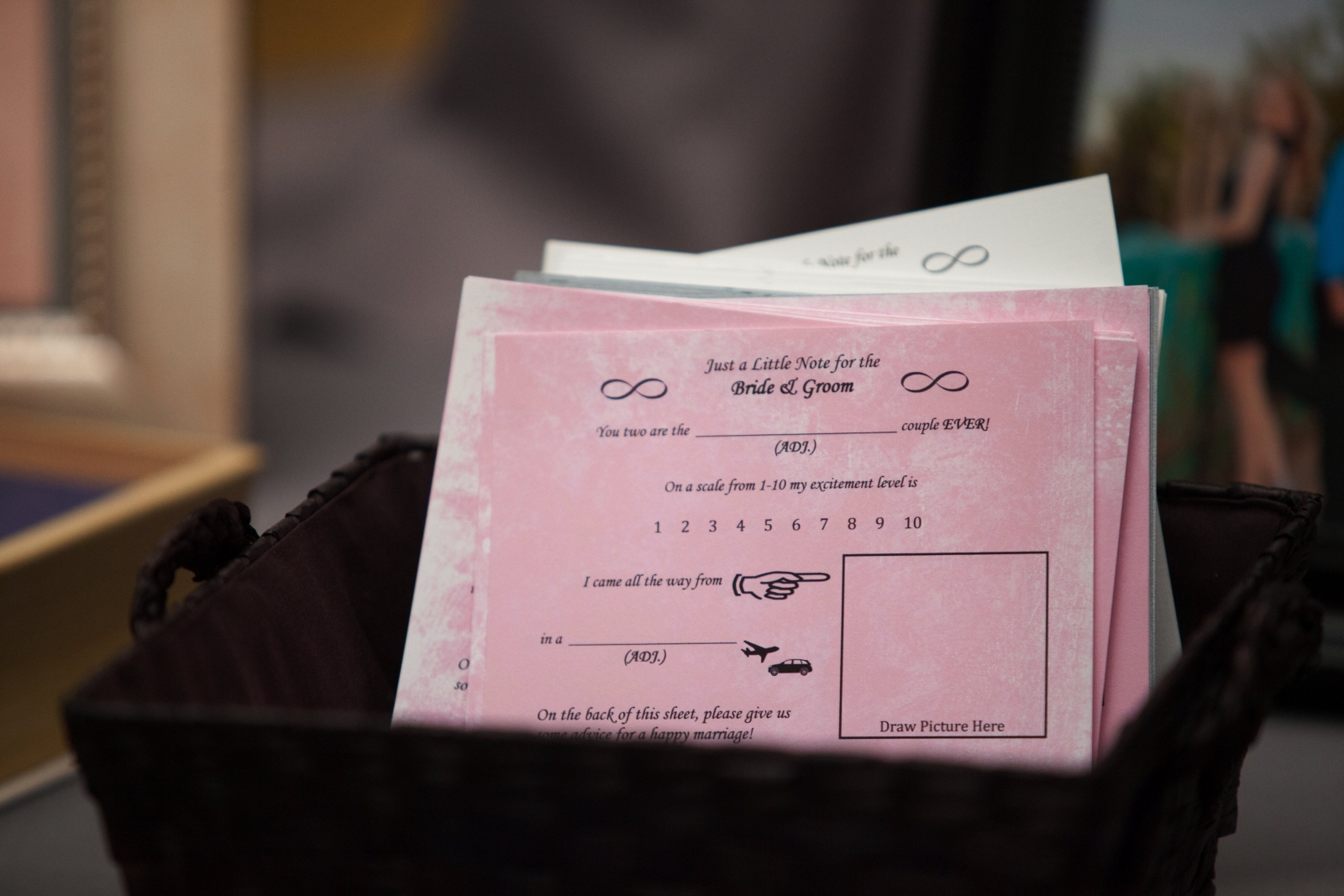 Lindsay Weyandt and Ryan Progin chose to substitute a Mad Lib activity for a guest book at their reception on June 21 at Carnegie Music Hall in Oakland. They asked guests to fill out a sheet of questions that Lindsay designed and printed on card stock. The template, which Lindsay devised after seeing a similar idea on Etsy, included a space for guests to write in marital advice and a spot for them to draw where they came from to attend the wedding. One humorous drawing featured kangaroos, provided by a college friend who traveled from Australia for their big day.

Lindsay and Ryan compiled the Mad Libs into a book that they pull out when they need a laugh or advice to get through hard times.

“We knew that we weren’t ever going to look back at a traditional guest book,” Lindsay says.

Christine Ferguson, president of Prima Eventi in Fox Chapel, says a guest book in any form can become a special item to cherish. But she has seen very few traditional guest books in the 18 years in which she has planned weddings.

“It’s lovely to know not just who was at your wedding but to see their handwritten signature or note,” Ferguson says.

Both she and Calvimontes note that one specific guest-book trend is the creation of a guest tree. Attendees add their fingerprints and names to an artist’s rendition of a tree with empty branches — guests’ prints become the leaves. Another fad involves framing a large print of the couple’s engagement portrait and allowing guests to sign the matting. Both of these options can hang in the couple’s home as a daily reminder of their special day.

“Something hanging on the wall is not something that is soon forgotten,” Ferguson says.

Ferguson says she encourages brides to choose a guest-book option that will work best for them after the wedding. Some couples may not wish to display personal messages in their homes, she notes.

When Tara Poropat married Patrick Rusiski on Oct. 4, 2014, she decided to forgo a traditional guest book in favor of messages written on postcards by her guests.

Tara says the idea occurred to her after completing an activity planned by her maid of honor for her bridal shower: Each guest at the shower was asked to write date-night ideas for Tara and Patrick on slips of paper. She wanted to receive similarly personal messages from her wedding guests after she tied the knot at St. Maria Goretti Parish in Bloomfield.

Tara found vintage floral postcards on Etsy and set them out on her wedding day with a sign asking guests to “share their best wishes with the bride and groom.” The couple opened a few of the postcards right after the wedding but kept most of them to open every few months or on special occasions, such as their recent four-month anniversary. 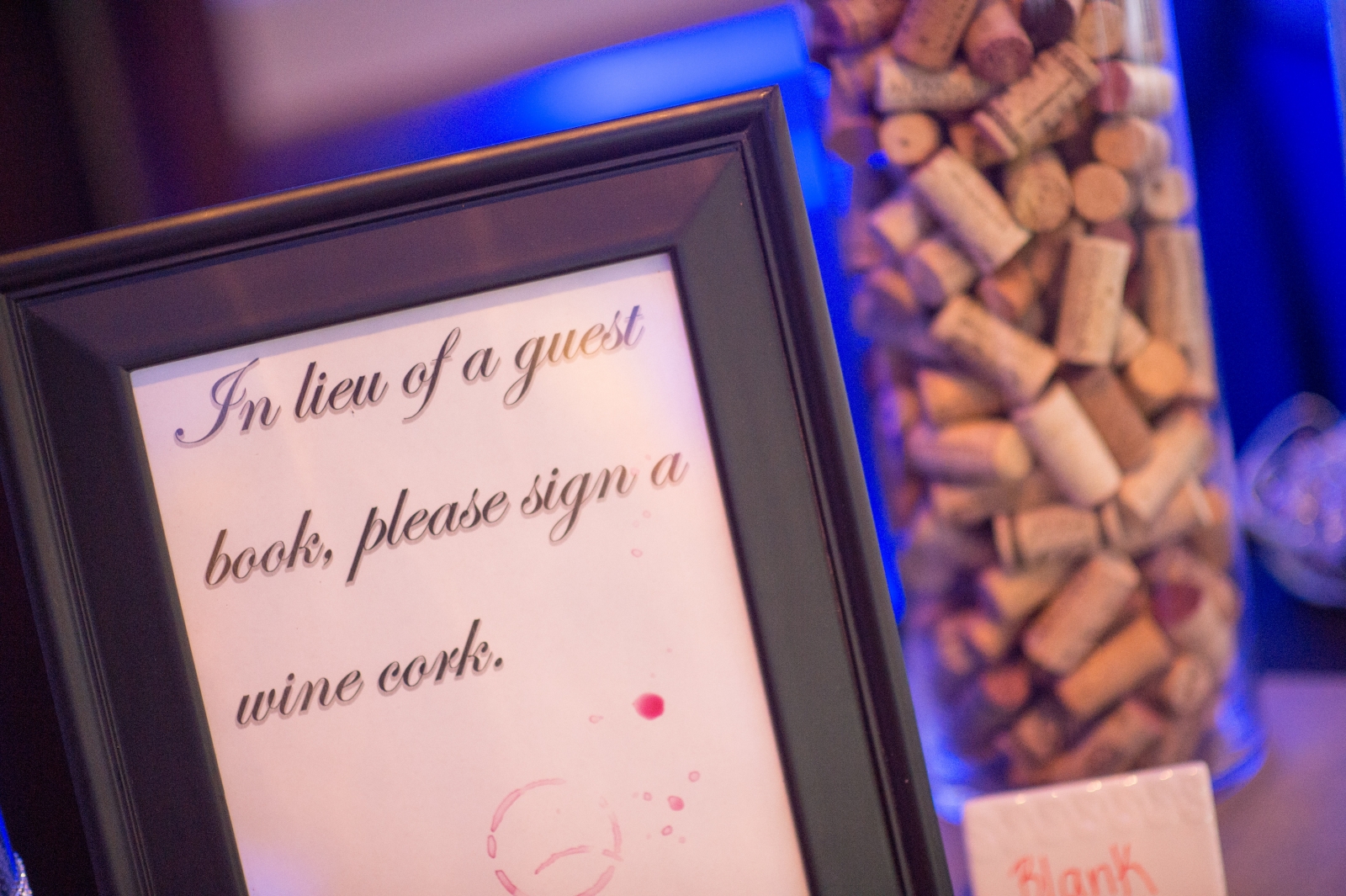 Wine became the unofficial theme for the wedding reception of Ami Lytle and Anthony Cortese at the Sewickley Heights Golf Club: Ami studied abroad in Italy, and Anthony is of Italian descent. The couple collected and displayed wine corks during their five-year romance and wanted to add to their collection on their wedding day on Aug. 30, 2014.

Ami posted a sign asking guests to sign a cork instead of a book; it featured a specially designed wine-ring graphic that appeared on the Cortese’s invitations, save-the-date notes and gift bags. Their now-shared last name, Cortese, is a type of grape used to make a white Italian wine that served as the centerpieces on their reception tables. A glass vase holding the signed corks now stands in the couple’s bedroom.

Wine corks also were used as the base for the couple’s table numbers, which Anthony hand-painted with wine.