Ever get an itch to sprint around your neighborhood after 8 p.m.? Think again. 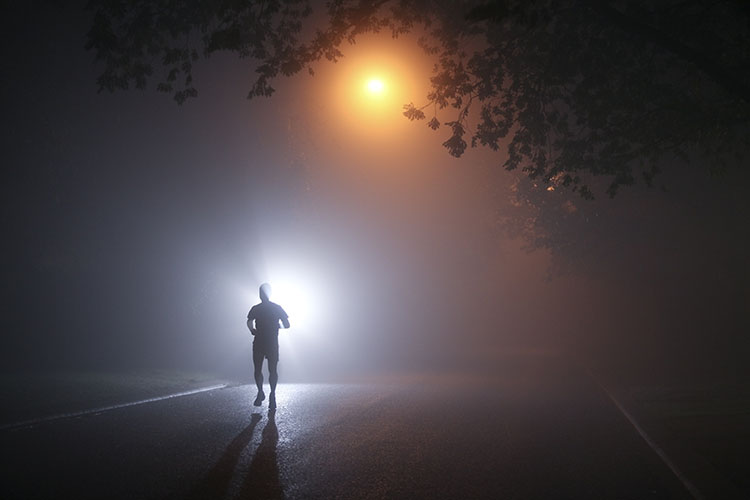 I’m attempting to write this post with minimal use of the letter O.

See, last Thursday night, I went for a jog. And I fell down. Really roughed up my right hand  — I haven’t been able to make a fist in nearly a week, and the tip of my ring finger seems to have no particular interest in straightening. I may be headed for a doctor’s appointment rife with questions such as, “So…that’s not right, huh?”

Until that appointment, however, I’m limiting the O’s. The touch-typists among you will note that you need to extend your right ring finger to hit the key, and I’m not a fan of that particular motion at the moment.

Dang. Sixteen O’s in that paragraph.

The name of this blog, as you may have noticed, is After Dark. I’m here to recommend things for you to do at night — activities, destinations and (mostly) beverages that can enhance your nocturnal hours. This week, though, I’m here to discourage rather than encourage.

I am an inexperienced runner at best. I’ve completed exactly one 5K, with a time that I personally consider respectable — but certainly not respectable enough to include here. I like running, but I’m not particularly good at it. The $12 phone-strapping-armband-thing I bought off of Amazon represents the height of my fitness expenditures. Right now, though, I’m enjoying the 5K Trainer App by Zombies, Run!, an interactive story game that casts you as a zombie apocalypse survivor running supply and rescue missions. Our frequent contributor Katie Booth listed it in a piece about health and fitness apps that appeared in our May issue; it’s an entertaining and engaging way to try to enjoy your exercise.

Last Thursday, though, I was in a bind. I’m not supposed to let more than 72 hours pass between workouts, and time was up — but I couldn’t hit the street until about 8:30 p.m. “No problem,” I said to my indifferent dogs. “Who needs light?” As the sun set, I headed into Frick Park … and noted that, under cover of foliage, mid-evening becomes pitch black in a hurry. (This is one of those facts that outdoorsy people are aware of; obviously, I am not an outdoorsy person.)

Undaunted, I diverted into Regent Square, opting instead to just snake up and down Braddock, East End and Biddle avenues. This proved to be a disastrous decision. As total darkness fell around 9:15, I stopped thinking about the fading light and charged ahead. I was most definitely not thinking about sidewalks either. Had I been, I would’ve remembered that many Pittsburgh sidewalks look like an earthquake struck them sometime in the mid-’80s — and we yinzers just pretend we like ’em better that way.

I was running. Then I was airborne. I remembered the immortal words of Ricky Bobby: “Yup. I’m flying through the air. This is not good.”

I landed on my right hand, and I’m pretty sure I rolled over it for good measure before coming to a stop, lying on my back. A woman was walking two dogs a few feet away and seemed traumatized by the incident. Her pug came over to lick me a few times. I worked my way to my feet, confirmed that I hadn’t broken anything (uh, I hope?) and made my way home.

Hopefully, I’ll be able to make sandwiches pain-free within a couple of days. Lesson most definitely learned, though: no more jogging at night. Pittsburgh is not the city for it. Ignoring how safe your neighborhood is, our city is just too hilly to tear through sight unseen; in a neighborhood with well-maintained sidewalks, you’ll probably have hills, and even on a flat street, you might have roots and wear-and-tear making the route treacherous.

If you find yourself needing or craving a run after the sun sets, consider keeping a low-cost gym membership just for the treadmills. You may not be enough of a workout fiend to justify paying $40 or more per month for access, but just about every gym has plenty of treadmills — I keep up a $10-a-month Planet Fitness membership (a fact I had conveniently forgotten until I was hitting the pavement), and the location nearest to me is open 24 hours. Even if you only go once or twice a month, that $10 is worth it for safety and flexibility in your schedule. And Planet Fitness is far from the only accommodating spot — Gold’s Gym downtown won’t cost you much more and is open until 11 on weeknights. Club Julian in the North Hills is open 24 hours, too.

Just don’t be running outside after dark, lest you find yourself wincing every time you use the letter O. You don’t want that. It’s a fairly common letter.