Going Underground in the Strip

Oh yes, there were ancient catacombs in Rome where early Christians hid and prayed when they were being persecuted for their beliefs. Sometimes bodies were buried in catacombs. But here, closer to home, in the Strip District, before we all became foodies and learned to love shopping along Penn and Smallman, there were once catacombs, subterranean passageways and rooms, under the big old St. Patrick’s Church.

St. Patrick’s was the oldest Catholic parish in our city, founded in 1808 by early Irish settlers here, and over the years (before it was consolidated into the parish now known as St. Patrick-St. Stanislaus Kostka), it had several churches, the largest of which was built in 1865. With a school attached to the church, the complex filled the entire block from 17th to 18th Street along Liberty Avenue, the block where the much smaller church called Old St. Patrick’s stands today. 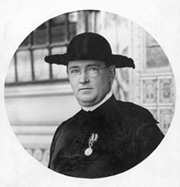 Our modern Old St. Patrick’s Church has many distinctive features: There’s reportedly a chunk of Ireland’s beloved Blarney Stone in the slender stone tower, a beautiful walled courtyard, a mock grotto to remind you of the one at Lourdes in France, and inside the church, a set of Holy Stairs, which you’re supposed to climb only on your knees, saying prayers at each step. There’s a slot in the wall by the altar, too, because from 1925 to 1958, WJAS radio used to broadcast Mass from here every Sunday, and the radio guy behind the wall had to be able to see what the priest was doing.

The priest who put all these distinctive features into the church was Father James R. Cox, one of the most popular and unusual priests in American history. He claimed to be the first priest to celebrate Mass in an airplane. He regularly led special pilgrimages to Lourdes. Heshowed great sympathy to the poor and unemployed during the Great Depression and led a famous march of the unemployed on Washington, D.C., in 1932, the same year he ran for president of the United States on the Jobless Party ticket. He was quite a guy and apparently a very effective speaker and priest. 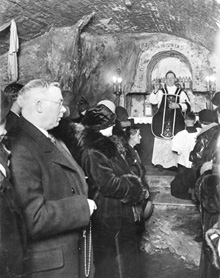 He also was the mastermind behind the catacombs. When he became the young pastor of St. Patrick’s in 1923, these underground spaces may have been just funky parts of the church basement, but Father Cox knew how to make them interesting, and for a while he charged admission. Clever.

There’s not a lot of officially written history of these subterranean spaces, but when I find an old photo online of Father Cox saying Mass in what looks like a basement, I think that must be the catacombs. Also, Derris Jeffcoat, who takes care of a lot of St. Patrick’s historic materials, agrees with me. He even thinks there might be some of that old vaulted brick ceiling still down in the boiler room of the current church. The big old church burned in 1935, and the catacombs were destroyed, but some of the old foundation may still be down there.

In some pictures of the big old church, you can see an archway over the sidewalk on Liberty that says ”Catacombs.” I like to think of them as a sort of holy roadside attraction, a way to get people into the church, make a small donation, maybe pay more attention.

Maybe because we’re all still cavemen at heart, we love to know about all underground passageways. Maybe because these catacombs are such wacky little historic quirks, we want to know more. Maybe because there was some P.T. Barnum-style ingenuity and blarney involved, we’ll never forget Father Cox and his many ways of grabbing our attention and making us think.

Special thanks to Derris Jeffcoat and Dan Yates from St. Patrick’s, and to Miriam Meislik at Pitt. Photos courtesy of St. Patrick’s Church Archives and James R. Cox Papers, 1923-1950, AIS.1969.05, Archives Service Center, University of Pittsburgh. Rick Sebak is a TV producer at WQED Pittsburgh. His mother was baptized by Father Cox, and she says there are photos, but Rick can’t find them.

This article appears in the March 2010 issue of Pittsburgh Magazine.
Categories: Rick Sebak