North America's most popular fruit has a fascinating history and delicious appeal.

A ripe yellow banana is the perfect on-the-go snack and a pleasure that’s cheap and universal. From the fanciest grocery to the lowliest corner store, no fruit is more ubiquitous—worldwide, people eat nearly 30 pounds of bananas each per year. Back in the 19th century, however, the fruit was virtually unknown; a major attraction at the Centennial Exposition in Philadelphia in 1876 was the chance to see a real banana plant and to buy foil-wrapped bananas as an exotic snack.

Banana plants resemble trees, but are actually towering herbs of 15 to 30 feet high in the same family as lilies and orchids. They originated in India and spread via Arab traders to the east coast of Africa, eventually arriving in the Caribbean and the Americas via Portuguese and Spanish explorers.

The first banana plantation in the United States was established in Florida in 1876, but it failed because the climate wasn’t warm enough. Instead, production exploded in the Caribbean, and the Boston-based United Fruit Co.—which later earned a reputation as one of history’s most corrupt and controlling influences in the banana-growing countries of Central America—became hugely successful. By the early 1900s, the company was selling the fruit cheaply and marketing it as ideal baby food (commercial jarred baby food wasn’t introduced until the 1930s) and as an essential for breakfast, leading to the cereal-and-banana combo we now think of as classic.

The early 1900s brought the invention of the banana split, which some claim was invented at Tassel Pharmacy’s soda counter in Latrobe. In the 1940s, Chiquita created an enduring female figure named Chiquita Banana based on a role played by Brazilian actress Carmen Miranda in the movie The Gang’s All Here, in which she wore a hat of cascading bananas. The accompanying ad jingle topped the charts and, perhaps because the company distributed the sheet music to public schools everywhere, remains popular even today.

The familiar old joke about slipping on banana peels may very well stem from the fact that, by 1910, the fruit was so popular that peels on the sidewalks became a public nuisance. Lawsuits brought against railroad companies by passengers who claimed injury after slipping on banana peels actually succeeded. A Boy Scout Handbook from the early 1900s gave instructions for, of course, helping old ladies across the street, but also for picking up banana peels from the sidewalk to prevent accidents.

These days, we seem to have mastered putting our peels into the trash, but the way we eat bananas—on cereal in the morning, as a midday snack or in simple baked treats—remains much the same as it has for nearly a century.

Bananas are the most popular fruit in the American produce market, and only one type is widely sold—long and tapered in shape, with yellow skin and soft, sweet fruit.

The characteristic curve of bananas results from the fruit tips growing upward against the downward pull of gravity.

In other parts of the world, however, bananas of different sizes and colors abound. At Latin markets and specialty produce stores, you might find the Manzano, also known as the apple banana, which has a pleasant, applelike flavor and reaches peak ripeness only when its skin is nearly black; the red banana, a firm fruit with a flowery scent; or the related plantain, which is starchier and less sweet.

In most American kitchens, however, regular bananas reign supreme. What matters the most is getting them to the stage of ripeness we prefer—and coming up with creative ways to use them once they pass their prime. Below are a few helpful hints:

It’s a breeze to whip up banana bread or smoothies any time if you keep a store of frozen bananas in the freezer; it’s also an efficient use of overripe bananas. Simply place whole, unpeeled bananas into a plastic bag, then seal and freeze. When you’re ready to use, remove them from the freezer and thaw until softened.

Most bananas are grown in the tropics by huge producers that depend on heavy use of chemicals. Yet partly because their outer peel is removed before eating, bananas don’t top the list of produce items containing pesticide residue (peaches rank highest; to see a full list, visit foodnews.org).

However, it’s still important to buy organic bananas. They are generally easier to find than any other type of organic fruit and don’t cost a great deal more than conventional bananas. Most important, buying organic supports the smaller farms in Latin America and the Caribbean that use sustainable-farming methods, such as planting the bananas alongside tropical fruits and cacao trees to simulate rain-forest diversity.

Bananas put off an exceptional amount of ethylene gas, which causes ripening and development of color. This makes it easy to ripen greenish bananas: Simply place them into a brown-paper bag or lidded container overnight. If you like, add apple, tomato or avocado, and the natural gasses from the fruits will help the ripening process of all of them.

If you don’t need to speed up ripening, keep the bananas in a bowl on the counter where they will take just slightly longer to achieve perfect ripeness. (A kitchen gadget called a banana hanger, which mimics the way supermarkets display bananas—suspending them from a pole with small hooks—does not speed ripening or improve banana quality.)

This moist banana bread freezes beautifully. Using four small pans allows you to keep a couple of loaves out for immediate snacking and store two in the freezer for later—although this bread is so delicious that you might want to devour all of it right away. 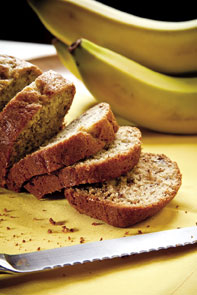 Preheat oven to 350 degrees. In a medium bowl, combine 1/4 cup canola oil, 1 cup sugar and 2 large eggs. Beat hard with a whisk or electric mixer until light and creamy, at least 1 minute. Add 1 teaspoon vanilla extract and beat again. Mash 2 to 3 very ripe bananas (their skins should be speckled with brown) to make 1 cup. Add mashed bananas and 1/2 cup of sour cream to mixture and beat until smooth.

In a separate bowl, combine 11/2 cups all-purpose flour, 1 teaspoon baking soda and 1/2 teaspoon salt. Add the dry ingredients to the banana-egg mixture and beat until well-combined and creamy. Divide among 4 greased and floured small, individual loaf pans (51/2 by 31/2 inches) and place the pans onto a baking sheet. Bake for 35 to 40 minutes until the tops are firm and a toothpick inserted into the center comes out clean. Remove from the pans and cool on a rack. Loaves will keep in the refrigerator for up to 4 days wrapped tightly in plastic wrap.