God, Football, and The Wrong Seat on the Couch

Gatherings around the television for Steelers playoff games have made my family look like we’re filming the climactic scene of a Marx Brothers film. Change seats. Change socks. SOMEONE GO STAND ON THE LAWNMOWER AND LET’S SEE WHAT HAPPENS. 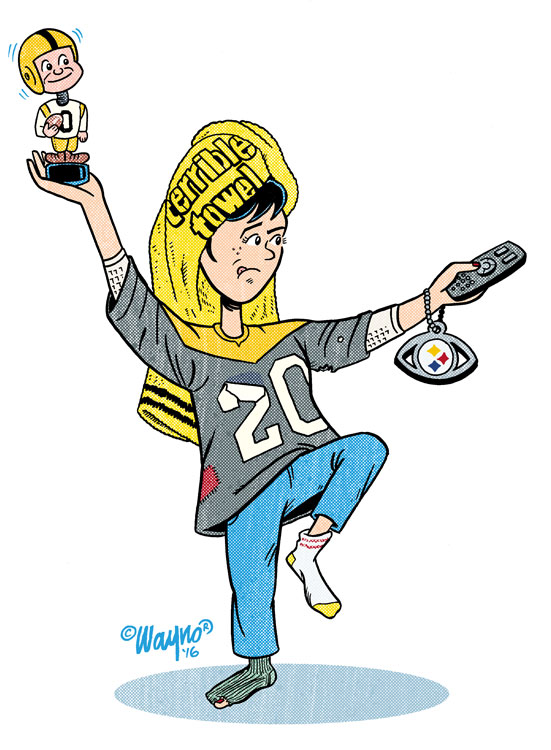 Your father made me wear the same clothes I was wearing last week,” my mother said with an eyeroll as she pulled off her coat and stepped into my house.

After 47 years of marriage, my thrifty father certainly isn’t exercising any control over my mother’s wardrobe — or she’d probably still be wearing high-waisted, acid-washed mom jeans she purchased unironically in 1985 at Hills Department Store.

There is one exception.

On those days, my father takes what he knows about logic and the entire working order of the universe, lights it on fire and tosses it into the trash. In its place, he holds onto his Terrible Towel and his truth: What worked for the nail-biting, Bengals-bed-pooping wildcard game will surely work for the AFC Divisional Playoff.

This is what most superstitious Steelers fans believe.

But most Steelers fans are not ordained ministers like my father.

Indeed, my metallurgical-engineer father, who has worked for U.S. Steel for 45 years, also is a preacher. He is a scholar of the Bible. His home library is filled with exegeses of every book of that Bible. He made certain his five daughters could name all of the books before they were 8, and that they knew what exegesis meant before they were 10.

This man — who has dedicated most of his life to his belief that an omniscient, omnipresent, all-powerful higher being is executing a perfectly crafted plan for humanity — also believes that if he is sitting in the wrong spot on the couch while watching a Steelers game, he might somehow influence the outcome.

I have recollections of him leaving the living room to use the restroom during games when I was a teen. If something good, say, a Steelers touchdown, were to happen while he was in the restroom, he would retreat there on occasion during the remainder of the game to see if he could recreate the magic. If something bad happened while he was in there, he would sooner dig a privy hole in the front yard with a spork than enter the bathroom again, lest the power of his bladder unleash a Steelers fumble upon the world.

He has spent countless games peering around the wall from the kitchen. See, for a good while, he was convinced that was “his spot.” I hope Chuck Noll and Bill Cowher are aware their Super Bowl wins came about only because of “his spot.”

My father will meaningfully tell you he left the room just before James Harrison’s interception and touchdown during Superbowl XLIII. It meant something.

He has managed to unintentionally pass this superstition down to his daughters. We will switch couch seats. Send random family members to the bathroom at tense game-deciding moments. “Tammy, it’s your turn to go to the bathroom and see if you can make an interception happen.”

“Why are we losing?! Is someone wearing different socks?! On the count of three, everyone stand up and move one seat to the right.”

Gatherings around the television for Steelers playoff games have made my family look like we’re filming the climactic scene of a Marx Brothers film. Change seats. Change socks. SOMEONE GO STAND ON THE LAWNMOWER AND LET’S SEE WHAT HAPPENS.

So on that January afternoon, my mother pulled off her coat to reveal the same clothing she had worn the week before, when those madcap Bengals mercifully snatched defeat from the jaws of victory. My father walked in behind her and pulled open his coat to say proudly, “I’m wearing this shirt I was wearing last week, even though it’s Dallas Cowboys colors.”

My sister — the same one who believes if she says “interception” and points to the ceiling, she can actually cause an interception to happen at a game being played 1,000 miles away — pointed out to my father the ridiculousness of it all. He paced my living room, futilely looking for “his spot.”

“Dad, where you stand or sit has no effect on the outcome of a game. And God does not care one flip about football.”

My father, the minister, the Steelers fan, the steel man, glanced at her, glanced at the television, realized a very important fourth down was coming up … and promptly headed for the bathroom.

It’s not hypocrisy, you see; it’s just him being a ’Burgher.

That’s his Pittsburgh, and that’s my dad.

This article appears in the March 2016 issue of Pittsburgh Magazine.
Categories: From the Magazine, Hot Reads, PittGirl