This week, slip the big-box theater retailers and see a labor of love at a boutique production company.

An ongoing project of sorts here at After Dark is to call some attention to the most innovative and engaging theater companies in town, especially if those companies could be described as under-appreciated.

Even those without a predilection for the stage should be aware that the theater scene in Pittsburgh is thriving. At least three companies—the Public, the City, and Pittsburgh Irish and Classical—could justifiably be considered world-class regional theaters. A dozen well-established others, like Pittsburgh Playwrights and Prime Stage to name but two, have carved out devoted followings by excelling at strong productions on a somewhat smaller scale. Which is to say nothing of musicals, both local and touring, that pack the Benedum and Heinz Hall with devoted fans of all ages.

On the fringe, though, the Pittsburgh theatergoer is blessed with a seemingly endless parade of challenging, passionate work. There’s something thrilling about seeing a true labor of love. Companies with no subscriber base, no guaranteed coverage by every media outlet in town, no big out-of-town name to put on the marquee—they seem to frequently approach the stage with abandon and an earnest love for what they’re doing. It’s refreshing, to say the least, and any ’Burgher that doesn’t make it to theater in a tiny room every now and then is missing out.

I last wrote about Bricolage Production Company after seeing their excellent Hunter Gatherers, which is probably the best thing I’ve seen in Pittsburgh in five years. They are currently engaged in their annual summer extravaganza, Midnight Radio; that series takes the form of a live radio-play broadcast complete with fake commercials, news breaks, hilariously generated sound effects and general olde-time wackiness. This week is Episode 2 – Cowboys and Aliens, in honor of the excellently-titled film of the same name, in theaters this week. I’d wager that the Daniel Craig movie will be a bit more serious than the Bricolage version. Don’t worry if you missed Episode 1, these are quite plainly stand-alone works. You’ve only got two more chances to catch Cowboys and Aliens, so grab tickets now, and mark your calendar for The Incredible Audio World of Pittsburgh Sports in August, Bootleggers and Bathtub Gin in September, and the brain-munching season finale, Zombie Apocalypse, in time for Halloween.

I’m also thrilled to find that No Name Players are mounting their fourth 2011 production. They’ve been around since 2004 (with a two-year hiatus in 2006-2007,) but have never presented more than two efforts in a year (both Artistic Director Don DiGiulio and Producing Artist Director Tressa Glover are in-demand actors regularly seen in productions all over town.) This month, though, they’re following up the hilarious farce The Book of Liz, which I reviewed in this space less than two months ago, with The Mistakes Madeline Made, in its Pittsburgh premiere. The play follows the plight of a personal assistant who develops a crippling phobia of bathing, a condition (ablutophobia by name) that quickly spirals into an all-out war on the world of the cleanly. Both Glover and DiGiulio appear in this one, as well as Book of Liz standout John Feightner. No Name Players are perhaps the most infectiously passionate company in town; I’ve seen three of their productions over the space of seven years, and they’ve all been memorable and delightful.

That brings me to Organic Theater Pittsburgh. The brand-new company takes their name seriously; in addition to using green building materials and working to make their production as eco-friendly as possible (and an offer of $2-off tickets in exchange for an old cell phone to be recycled,) they make ample mention of an “organic” approach. As they put it on their website, “Through a unique rehearsal process based on improvisation to discover the essential actions of the play, we seek to create a wholly organic theatrical product.”

That bit of information is illuminating after seeing their production of Sarah Ruhl’s Dead Man’s Cell Phone. It would take just such a process, I think, to create the vivid, incredibly real characters that this show offers. Dead Man’s Cell Phone opens with meek Jean (a virtuoso performance by Jaime Slavinsky, also Artistic Director of the company) discovering that a gentleman at a neighboring cafe table has perished, and his phone is ringing. In a moment of panic, she answers; from there on, she feels responsible for his legacy, largely through the continued possession of his cell. As she attempts to represent this man to his loved ones, she makes him better than he was; it’s a bold statement on how much of our identity we invest in our electronic representation, and equally as powerful as it is funny. 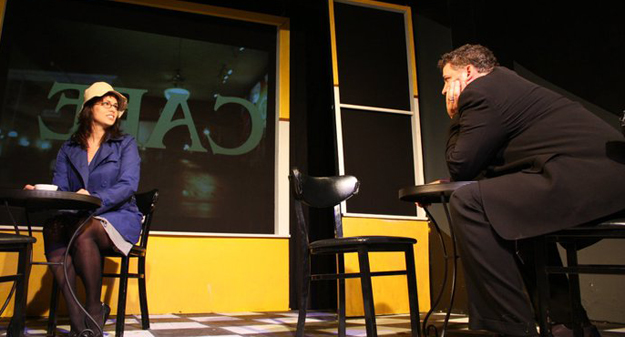 The script quickly creates an intimacy (aided by excellent set design and use of the small space at ModernFormations Gallery) through a number of opening scenes featuring a character literally or effectively alone on stage, addressing the audience. From there, it’s on the performers, and they can’t be stopped. Perhaps it’s the strength of the “organic” approach, or perhaps these actors and actresses just nail it, but for a play that features multiple trips to the afterlife and an overwrought fight sequence set to a Tarantino score, it’s as real as anything you’ll see on any stage.

Dead Man’s Cell Phone has uneven moments as it tries to toe the line between farce and earnest social commentary, but they are few and far between; for the most part, you’ll be entranced by a powerful production by a very serious new company. If this is what Organic Theater Pittsburgh will be bringing to the fringe, I’ll be back every time.