As the second-youngest recipient of the National Book Award for Poetry, Terrance Hayes is racking up accolades, yet remaining modest and calm. 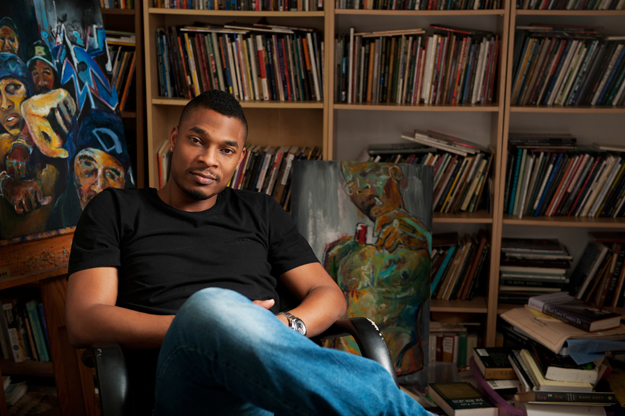 Like so many things in Pittsburgh, the story of Terrance Hayes begins with the Steelers. After receiving encouragement from a creative writing professor in his undergrad days, Hayes opted to pursue a career in literature rather than fine arts. In 1994, the South Carolina native and aspiring poet followed his buddy Willie Williams, who was drafted as a cornerback by the Steelers, north, where he earned an MFA from the University of Pittsburgh. After some time away — including a period when he lived in Japan — Hayes returned to Pittsburgh in 2001.

He’s gone from sending poems out with little expectation (as he did when his first book, Muscular Music, was accepted by Tia Chucha Press in 1999) to seeing his work in The New Yorker and other publications, and on “The News Hour with Jim Lehrer.” Hayes, 40, is the author of four critically lauded poetry collections, all of which feature his original paintings on the cover. His most recent work, Lighthead, won the 2010 National Book Award for Poetry, making him the second-youngest poet to receive the esteemed prize.

Hayes, who currently teaches at Carnegie Mellon University, resides in Highland Park with his wife, poet Yona Harvey, and their children. He spoke with Pittsburgh Magazine about surprises and the nurturing city he calls home.

Were you astonished to win the National Book Award?
They said to write a two-minute speech, but I didn’t because I thought C. D. Wright was going to win. Even an hour before [the ceremony], I wasn’t nervous. My wife and I were walking in Bloomingdale’s, or something like that, and I said, “Oh, we have to go,” completely calm and cool. And when they announced my name, I thought, What?!

Have things changed for you since winning the award?
Up until the NBA, I could convince myself that no one cared. The award brings with it a higher degree of attention.

Has that been a negative or positive experience?
I got an invitation to contribute to Poetry in Motion [which displays poems in the NYC subway system] — but I’d need like five years to write a 12-line poem. So those things are hard, to have those moments come and say to myself, Am I confident enough to do this? Generally I’m not — poetry is hard. But sometimes people think because you’ve received these accolades and you teach that somehow you have secret access to the poem. I always think that’s the beginning of the end, when you start thinking, Oh, they just want a “Terrance Hayes” poem, so I’ll crank something out.

Some people think that you need to live in New York or another hub of the publishing industry in order to be a successful writer. What has your experience been like as a writer in Pittsburgh?
Pittsburgh has been able to give [Yona and I] a lot of good that we need to take care of our family and be productive as artists. When I left Pittsburgh for a few years, my productivity was not the same as it was here — the place where I became a poet and had access to other poets and poetry communities. There’s something about the weather, the literary community and the bookstores — and everything else that happens here — that makes me productive.

Is the Pittsburgh literary community similar to those you’ve encountered in other cities?
When you live in Pittsburgh, you could almost think it’s typical. But the arts scene is very particular to the city; it’s not just that there are artists, but there’s a class of people who are interested in the arts. You saw that with Gist Street [the reading series held in an Uptown studio from 2001-2010], and you wondered, Where are all of these people coming from? You can go from there, a series started by a couple of poets, all the way up to the Heinz Foundation, where there’s support and funding. At every level in Pittsburgh, you find people who have a commitment to the arts. So many levels, so many tiers of support. That’s rare. I don’t think that can be replicated anywhere else.

As a poet and instructor, do you have any advice for aspiring writers?
To be a poet, write poems. It’s hard as hell, and there are no guarantees.

This article appears in the May 2012 issue of Pittsburgh Magazine.
Categories: Arts & Entertainment