Giving the Little Ones Room to Learn

An expansion at the Western Pennsylvania School for the Deaf will allow the storied institution to better serve the needs of its youngest students. 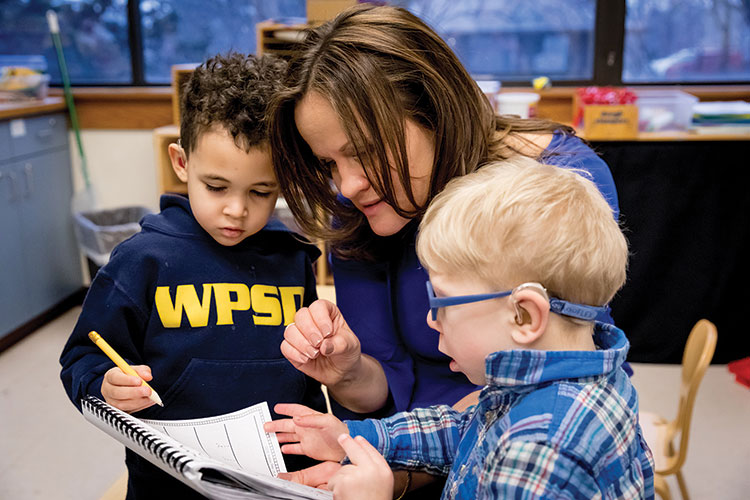 In a common room at the Western Pennsylvania School for the Deaf’s Children’s Center, a kindergarten class clamors around a table. It’s the students’ second day back after winter break and most are buzzing with post-holiday energy.

A teacher is monitoring the children, who are focused on the piles of Goldfish crackers distributed as an afternoon snack. Carrie Rain, director of Early Childhood Programs, is across the room when a girl shouts, “Carrie! Carrie!”

Rain signs to the girl, saying, “Would you like a hug? Let me come to you.” Rain and the girl hug and Rain signs — all adults are encouraged to sign to the best of their ability at all times — “I have to tell you, I love your pigtails today.” 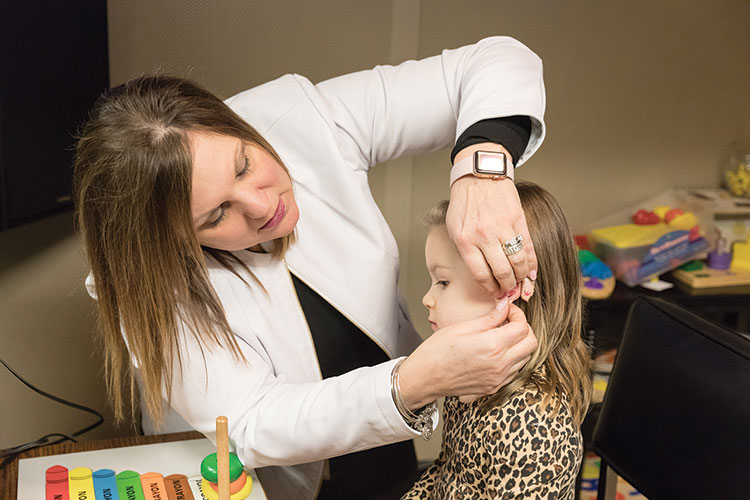 Rain’s kindergarten class is one of two, along with four preschool classrooms and the Choices for Children early intervention program at the Center, that serves children ages 3 to 6. The Center is in the process of a $2 million expansion slated to be completed this spring. The expansion will allow a fifth preschool class (an oral-based Montessori program currently housed in the administrative building) to move into the shared space.

The current Center opened in 2006; since then, the number of students has almost doubled, to 52. Rain, who just started her 20th year working at WPSD, attributes some of the growth to Intermediate Unit classrooms for deaf and hard of hearing children closing, as well as WPSD’s focus on meeting a range of student needs. 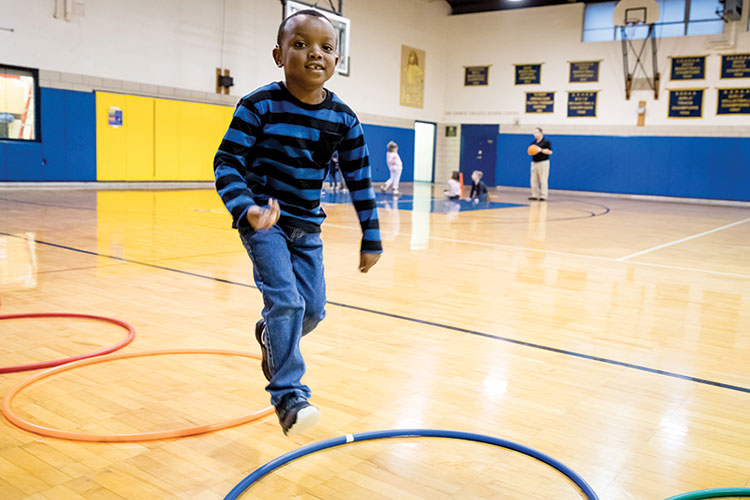 The new Center will be housed in 10,000 renovated square feet of what was previously a residential area. (A new student residence opened in 2014.) Funding for the expansion comes from a $175,000 grant from the county’s Community, Infrastructure and Tourism Fund, with the remainder raised through a capital campaign.

Teachers and aides had input in the design: In addition to standard classrooms, there will be rooms for art, American Sign Language instruction, sensory needs, additional speech services and a large multipurpose area. “The teachers put their Deaf Ed spin on everything,” Rain says, “with the emphasis on language and communication.”

WPSD, in Edgewood, was founded in 1869. It is a private non-profit and one of Pennsylvania’s four chartered schools for deaf and blind children, alongside Oakland’s Western Pennsylvania School for Blind Children and two in Philadelphia. WPSD has an enrollment of 191 students between preschool and age 21; students who live more than an hour away have access to residential services. 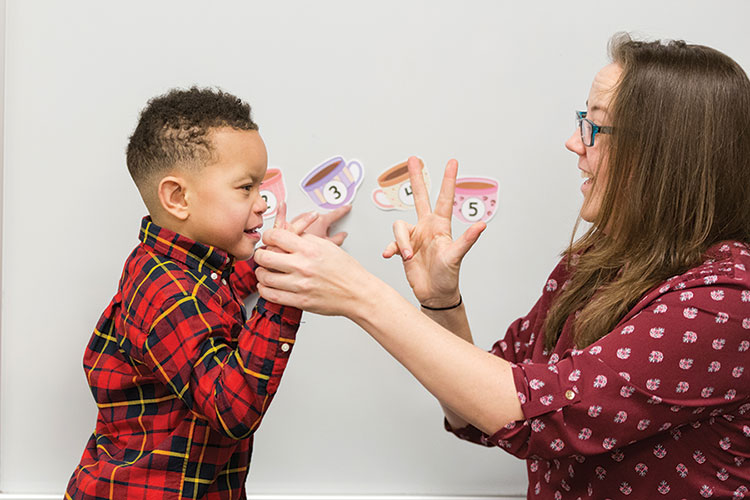 Communication is the biggest misconception Rain finds that people have about the school; often, people assume that students only use ASL. “We have children who have cochlear implants, we have children who are primary spoken English, primary ASL,” she says. “Our goal is for our children to leave our programs as strong users of both American Sign Language and English.”

Each classroom has a teacher of the deaf — some of whom are deaf themselves — and a paraeducator. Depending on their needs, children also receive speech, physical, occupational and vision therapy.

The National Institutes of Health reports that in the United States two to three children in 1,000 are born with hearing loss in one or both ears. More than 90 percent of deaf and hard of hearing children are born to hearing parents, which makes early communication intervention imperative. 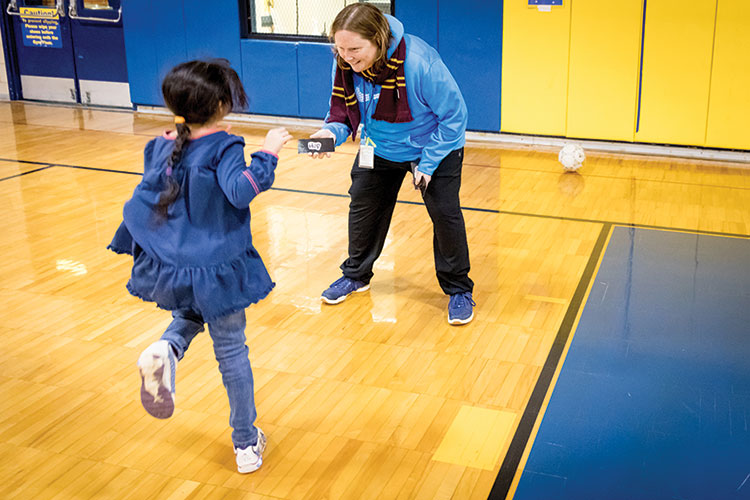 Children from birth to age 3 who are deaf or hard of hearing can receive early intervention services through WPSD’s Choices for Children program. The early intervention primarily takes place in the home; WPSD serves 85 families in nine counties surrounding Allegheny. Two days a week, The Children’s Center hosts a morning toddler/caregiver group, Discovery Days, that will gain space in the expanded Center.

Children enroll in early education at WPSD for a critical period for language and other developments. As they get older, they are not ostracized for things such as hearing aids and, because they’re in stronger social and emotional health, can better avail themselves of typical childhood experiences such as playing sports.

Another advantage, Rain adds, is “having access to other families of deaf and hard of hearing kids, having that sense of community, that sense of not being alone and being able to support each other.” 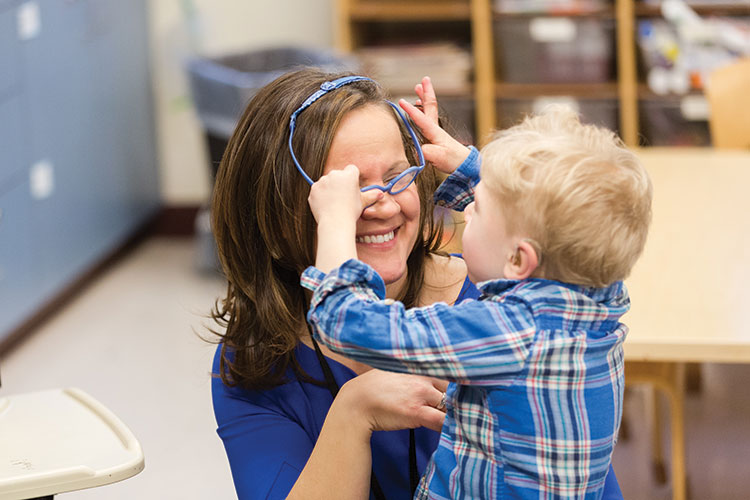 This article appears in the April 2019 issue of Pittsburgh Magazine.
Categories: Education