With a commitment to “Community” service Thursday nights on NBC, this Mount Lebanon native demonstrates her passionate path to prime-time TV.

“The very first play I did was in the third grade,” recalls Gillian Jacobs, who plays Britta, a 28-year-old community college student on NBC’s new sitcom “Community.” “My mom signed me up for my first acting course when I was 8. I took classes at the Pittsburgh Playhouse every Saturday.” Jacobs’ first play was Steadfast Tin Soldier. “I had to make my entrance from a janitor’s closet,” recalls the Mount Lebanon native.

Making an entrance was something Jacobs wanted to do in acting from an early age. However, as she explains, she wasn’t raised in a home full of actors and dramatic types. She was an only child whose father, Bill, who is an investment banker, and whose mother, Martina, works for Carnegie Mellon University in alumni relations. She credits Martina for her career path: “My mom wanted me to channel my dramatic tendencies, and that’s when acting became my passion.”

Jacobs graduated from Mount Lebanon High School in 2000 and was off to New York City to attend The Julliard School for drama. “At Julliard every class I took was related to acting. I had the exact same classes at the exact same time every week,” says Jacobs.

And how does playing the role of a community-college student every week on television compare with studying acting at Julliard? “At Julliard we were stuck in a room with the same 15 students, 14 hours a day for four years, and we became like family. That’s close to the feeling I have on the set of our show now. We have long—but good—days from reading the script for each episode to a table read to putting it on film.”

Jacobs graduated from Julliard in 2004 with a bachelor’s degree. She went on to do theater, and in 2006 she starred in the Off-Broadway play cagelove. A theater review about cagelove written by Jason Zinoman, of The New York Times, had this to say about Jacobs’ performance in the role of Katie in that play: “First, make sure to remember the name of Gillian Jacobs, a stunning Juilliard graduate who has the glow of a star in the making.”

Since then, this “star in the making” has made guest appearances on “The Good Wife” on CBS, “Royal Pains” on the USA Network and “Law & Order: Criminal Intent” on NBC. She’s also landed a recurring role as Adele on NBC’s “Book of Daniel.” Moviegoers would have seen Jacobs this past fall on the silver screen in The Box, in which she played Dana—Cameron Diaz and James Marsden’s possessed babysitter.

Now she’s gone from creepy babysitter to hot babe for her role as Britta on “Community,” and she moved to Los Angeles from New York last year to star in the show. The plot revolves around a character named Jeff, played by Joel McHale, of E Network’s “Talk Soup.” Jeff is a lawyer who has had his degree revoked because he fibbed on his résumé. Forced to go back to school, he lands at Greendale Community College and discovers a bright spot as part of the humbling experience: the beautiful Britta, a fellow student. Deciding to pursue her, he gathers a study group together in hopes of getting closer to Britta.

“You could say we’re a laughable group of misfits led by McHale,” Jacobs says of the ensemble cast, which includes Chevy Chase.

Although getting closer to Britta might be a challenge for Jeff, getting closer to Jacobs is easier for viewers. She has the glow that Zinoman describes in his 2006 review. Too bad she doesn’t think about that. “I try not to pay attention to reviews; as long as I’m happy, that’s what matters most.” 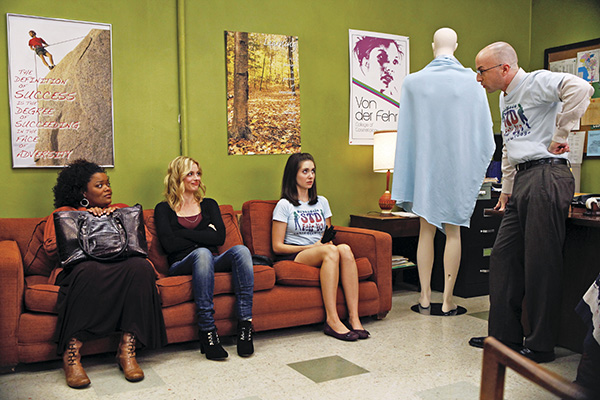 PM: What are your favorite  TV shows—past and present—that make you happy?
G.J.: I love “30 Rock” and “Parks and Recreation,” old “Saturday Night Live” episodes and “Curb Your Enthusiasm.”

PM: “Community” has a varied cast of people getting along from different backgrounds. Do you think these are roots for a long-lasting comedy?
G.J.: When you have diverse people, it provides such fertile ground for comedy and a range of funny topics.

PM: How often do you make it back to your hometown community?
G.J.: At least once a year to visit my family.

PM:  Favorite places to visit when you’re in Pittsburgh?
G.J.: The Mattress Factory is my favorite museum. And Eons on Ellsworth is a great place. I love vintage clothing.

This article appears in the April 2010 issue of Pittsburgh Magazine.
Categories: Arts & Entertainment