Getting Better Over Time: PNC Park at 15

Adoration for PNC Park is near-universal. But would the park be the cherished baseball palace it is today if a few early proposals instead had become reality? 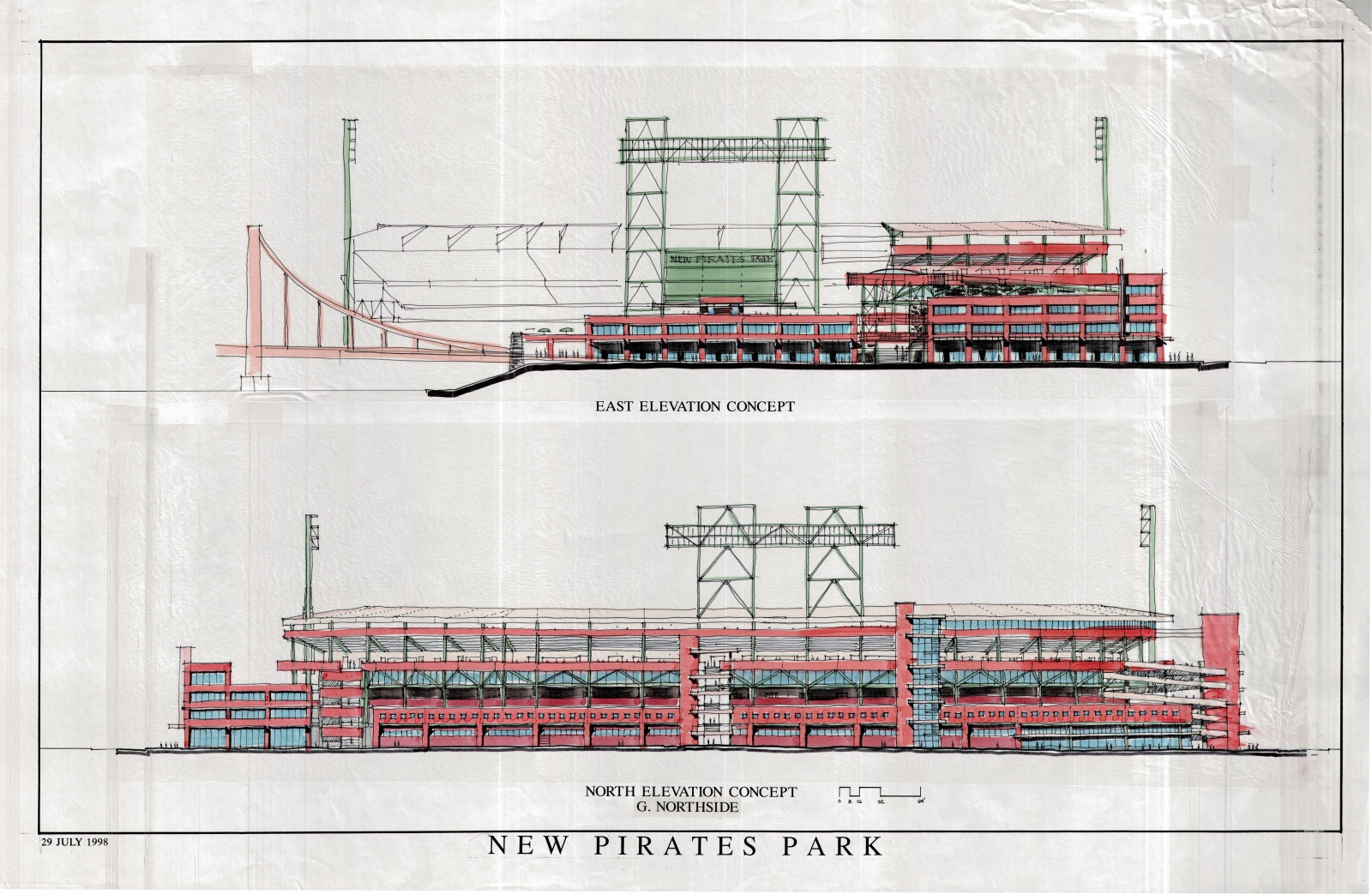 Try to imagine PNC Park with a red-brick exterior — not the current buttery-tan limestone that distinguishes it from every other ballpark. Or how about a 167-foot light tower in right center field obscuring that amazing view of downtown? And what would it be like with a 50-foot-high, multi-decked pirate ship right on the outer walkway? 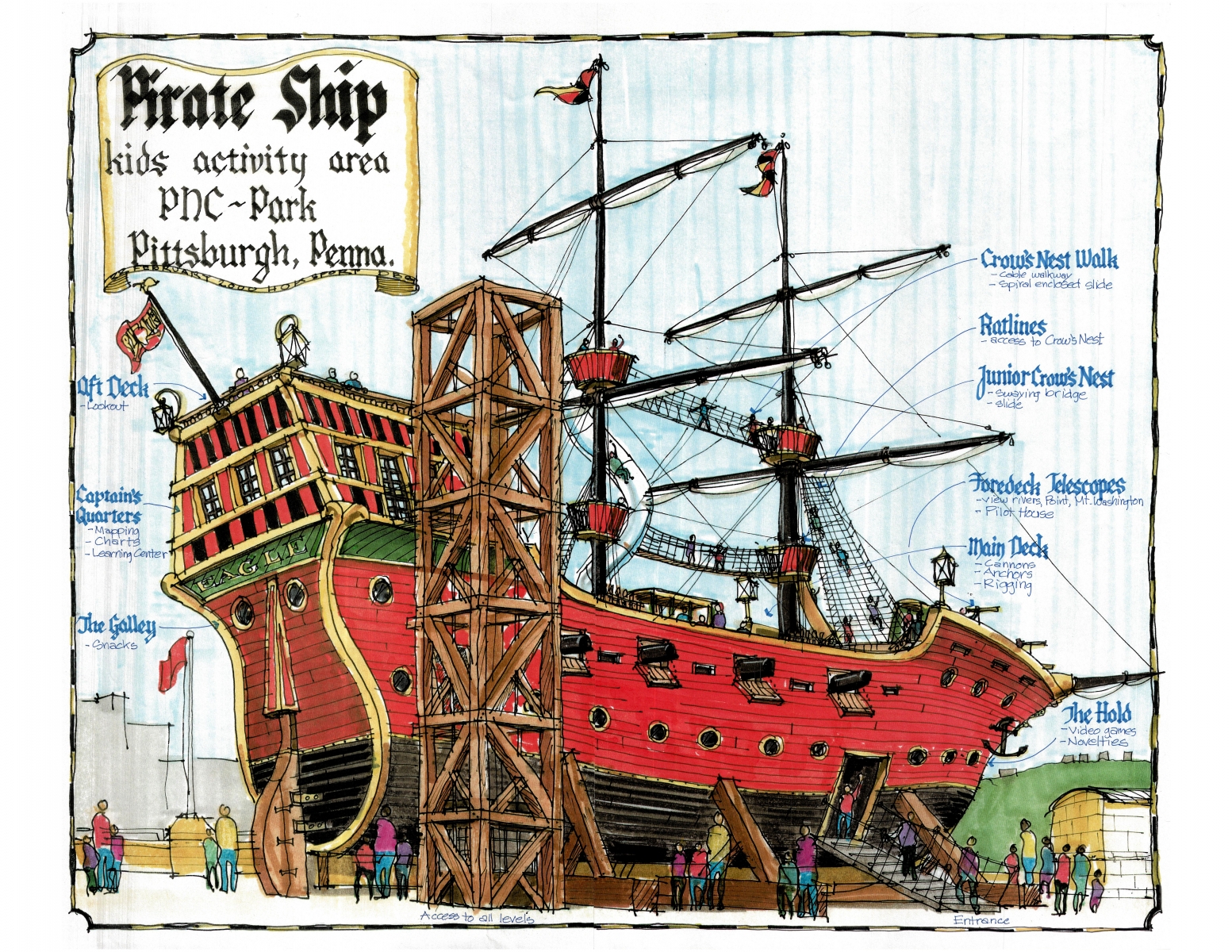 As PNC Park enters its 15th season, it’s worth wondering how it might have turned out. After all, with a few different decisions here and there, PNC Park could have been dramatically different.

The stadium on the Allegheny consistently is heralded as the best of the best — a perfect blending of old and new design (with a significant shoutout to the bygone Forbes Field). And it’s not just Pittsburgh Pirates fans who express their adoration. Just type “best ballparks in America” into a search engine of your choice and start reading the praise in dozens of reviews.

“To me, [PNC Park] is the perfect ballpark,” Mark Zuckerman testified in an article on Washington Nationals site Natsinsider.com.

The beatific ballpark hosannas for PNC go on and on, even as the Pirates seek to please fans further this season by adding two new outdoor bars, a two-level terrace with adjacent porch-style patio and other tweaks. But the instantly iconic design we know today was not always the plan. For starters, in the era when PNC Park was built, nearly all new parks were modeled after Baltimore’s Camden Yards. 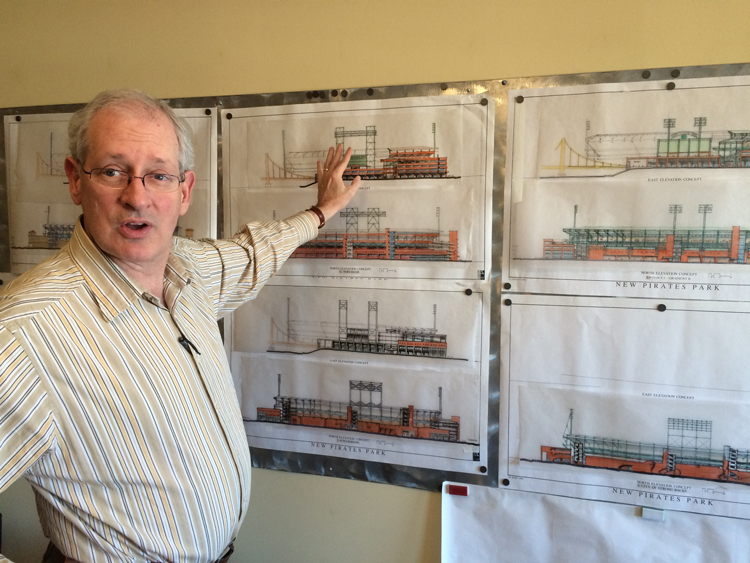 “In the beginning, the Pirates had it in their heads that they were going to get a red-brick building because that’s what everyone was building after Camden,” says David Greusel, PNC Park’s lead designer.

Greusel, who now has his own architectural firm, Convergence Design in Kansas City, Mo., was working at that time for design and architecture firm HOK Sport, also based in Kansas City. The firm — since renamed Populous — designed Camden Yards for the Baltimore Orioles, as well as many other venues, including Heinz Field, and was commissioned to design PNC.

In June 1998, however, the appearance of the Pirates’ new home was not etched in stone — at least not yet.

That month, Greusel came to Pittsburgh for the second time in his life for a week of on-the-ground “reconnaissance” to “get Pittsburgh under my fingernails.”

“I did a lot of walking,” says Greusel during an interview in his Kansas City office. “What I saw was that the civic buildings of the city were stone, [and] not brick.”

He also decided he wanted to try to “get some of that Forbes [Field] magic” in his design.

A month later, Greusel brought the Pirates a half-dozen hand-drawn ideas for the North Shore location.

They varied from a somewhat standard red-brick, retro stadium to a more modern proposal that mixed in a lot of glass. Still another red-brick design attempted to mimic the row houses of some Pittsburgh neighborhoods with a “books-on-a-shelf” feel to multiple storefronts that would’ve run along Federal Street.

Another proposal from Greusel included a gray limestone-sided ballpark idea that he dubbed “Pirate’s Cove.” From a distance, it looked a bit like a pirate ship.

“Some of these [proposals] fell by the wayside pretty quick,” Greusel says.

The tan limestone-clad proposal, with the profile that tapered as it marched to the Allegheny River and Clemente bridge, quickly became the favorite.

What Greusel did not know at the time was that Steve Greenberg — the Pirates’ longtime vice president of marketing who oversaw development of the new ballpark for the team — took similar reconnaissance trips around Pittsburgh. He reached many of the same conclusions as Greusel.

“In my mind, the buildings like the courthouse and the jail and the nicest houses were all stone,” says Greenberg, now executive in residence of sports marketing and director of the master’s program in sports leadership at Duquesne University. 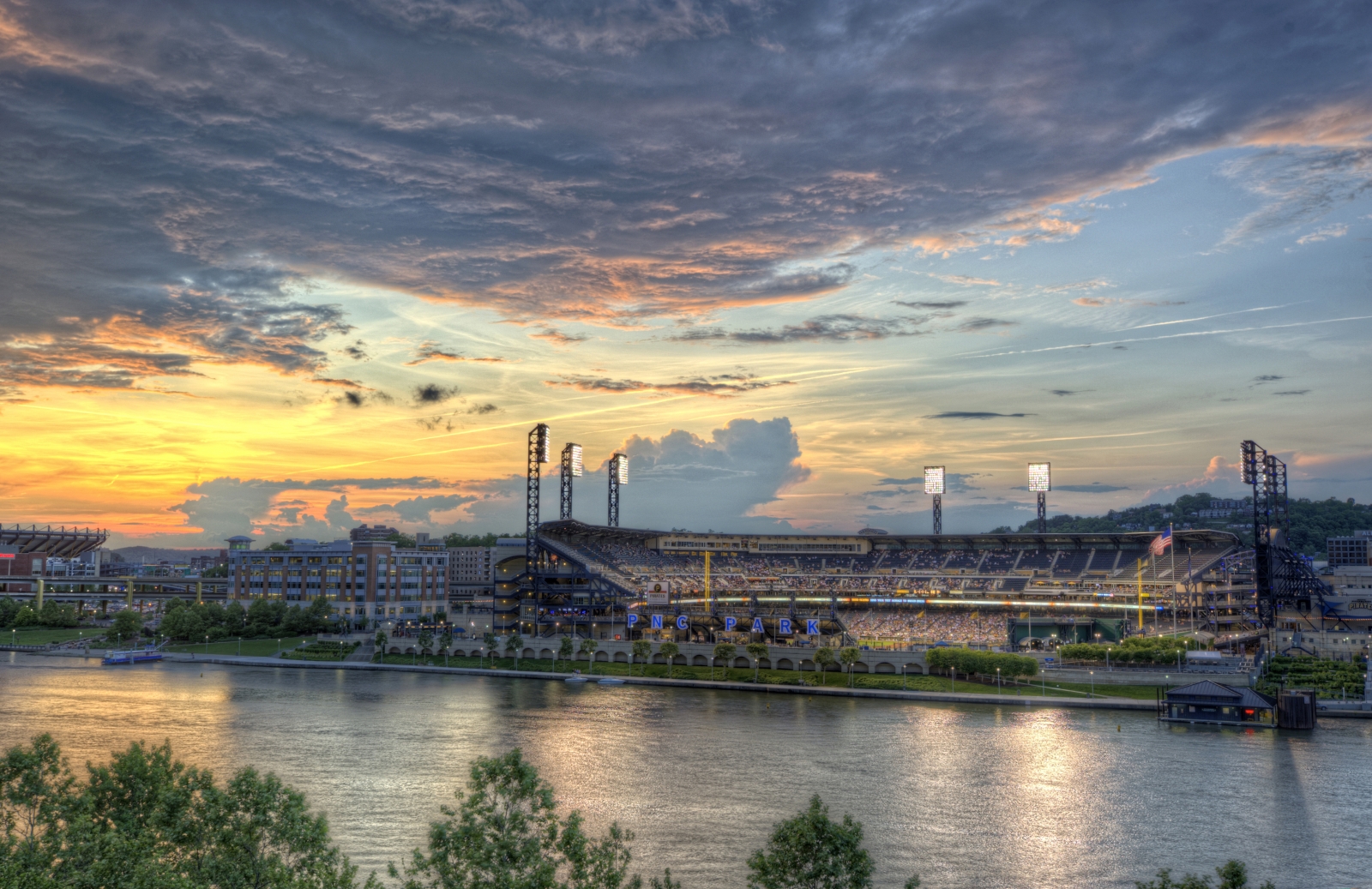 While the general idea was agreed upon by August 1998, other details of the final design still were being changed right up to the start of (and during) construction almost a year later — among them the potentially view-ruining light tower in right center field.

Greusel also had designed the Houston Astros’ Minute Maid Park, which also opened to that city’s downtown skyline. He fretted that a light tower obstructed the view for Astros’ fans.

“I learned from that,” he says, and he had PNC’s lighting engineers reconfigure the towers, moving the potential eyesore from right center field tower to the other side of the score board.

Greenberg also had come up with the idea of building a colorful pirate ship for the Pirates’ youngest fans, to be placed beyond the right field corner seats occupied today by a playground. Greusel drew up some playful plans.

“But the planning and arts commissions kept turning it down,” laments Greenberg. “I still think it would work.” 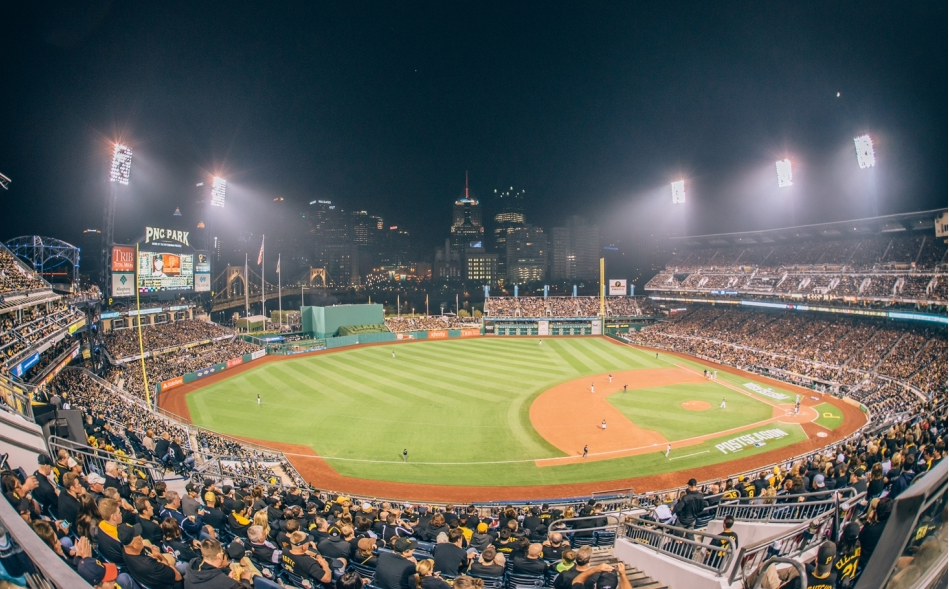 Greenberg says he wishes one aspect of the park could’ve been changed before opening day. One of the park’s most treasured details is the right field wall — exactly 21 feet high, in honor of Pirates great Roberto Clemente, who wore 21 on his jersey.

“I wanted that as a permanent way [for] everyone to remember all he did for the team and the city,” Greenberg says.

But when workers painted the distance-from-home-plate figures on the Clemente Wall a few weeks before the park opened, Greenberg looked on in agony: The distance was 320 feet, one short of achieving numerological perfection.

“It is the only mistake I made with the ballpark,” he says.

Of course, that’s not the kind of error that pops up in the reviews or polls. Greenberg and Greusel both report that friends frequently send them raves found online. And the personal comments are the ones Greusel cherishes the most.

“As an architect, the best affirmation you can have is that someone says they like your building,” he says. “And I hear that a lot.”

This article appears in the April 2015 issue of Pittsburgh Magazine.
Categories: From the Magazine, Hot Reads, Pirates