Get Tickets Now: The Dirty Ball Is on Saturday 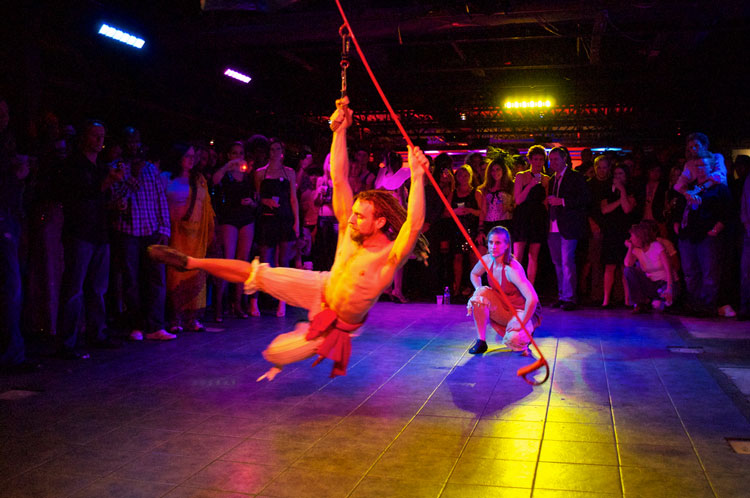 GET DIRTY AT ATTACK THEATRE’S ’BURGH-STOPPING PARTY
Get ready for a party like no other — one with time travel, performances and a little bit of dirt. Attack Theatre is celebrating its 20th anniversary with the 10th annual Dirty Ball. Head to the South Side Saturday to celebrate time: making timeless moments, adventures in time and time travel, among other chronological pursuits. The Dirty Donor Reception for VIP guests kicks off the night with a pre-party at 6:30; drinks and tunes by DJ Gordy G officially begin at 8 p.m. Because it’s one of Pittsburgh's most-loved annual parties, the $60 general admission tickets sell out fast, but don’t worry — you can score free admission by volunteering to set up and work at the event.
(415 Bingham St., South Side; $60-250; info here)
— Cristina Holtzer, PM Editorial Intern

SAILING HIGH ABOVE THE FOREST — OR THE FOOD COURT
Tomorrow, the Galleria at Pittsburgh Mills celebrates the grand opening of the Pittsburgh Mills SkyTrail, an indoor ropes course and zip track towering above the mall’s food court. Fundamentally, it’s the same concept as the Go Ape! Treetop Adventure course in North Park. Yet we can’t think of two more divergent environments than a wooded corner of a county park and the food court of a mall. So which ropes course is for you? Find out in this week’s edition of After Dark!

BASEBALL RETURNS TO THE NORTH SHORE
You’ll forgive us for extending our usual Thursday-Sunday reach, as the boys of summer return on Monday to PNC Park. Few things are as frustrating after the long, cold off-season as watching the Pirates start on the road, knowing that hungry hometown fans must wait another week for Opening Day — so we’re pretty fixated on the first homestand at this point.

The 10-game stay begins with an early Interleague matchup, as the Bucs take on the Detroit Tigers Monday-Wednesday. Tuesday night’s game should be attractive to the budget-conscious; select tickets are available for $1, as are hot dogs. Next Friday (April 17) is the first Free Shirt Friday of the season, and Saturday, April 18 will mark the first Zambelli Fireworks night of the 2015 campaign. So dust off your caps, dig your glove out of the closet and let dreams of October glory fill your head again. Baseball’s back.
(Info here)
— Sean Collier, PM Associate Editor

IN THEATERS: A week after “Furious 7” broke box-office records, the cinematic tide begins to recede. Still, there are movies premiering in Pittsburgh this weekend, including Noah Baumbach’s critically praised “While We’re Young,” with Ben Stiller and Naomi Watts, the Nicholas Sparks adaptation “The Longest Ride” and Helen Mirren in “The Woman in Gold.”