Buff up on your Civil War history with a quick weekend getaway, or just drink like a bluecoat. 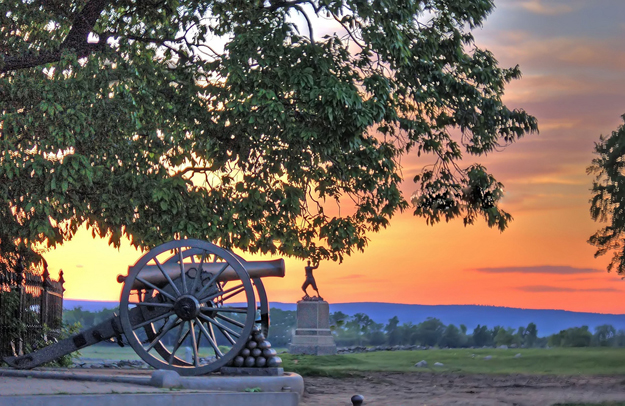 America’s Civil War, more than likely due to that conflict’s 150th Anniversary, has been popping up quite a bit for me lately. That, by the way, is the best way I can classify my interest. You can’t say, “I’m really into the Civil War,” because, you know, it’s a war. It doesn’t really have fans. And if you say “I’m currently interested in mid-19th century history,” everyone falls asleep. This does present a terminology problem when discussing the topic. But, yes, I find myself awash in Civil War-era culture, or something.

I eagerly placed Gettysburg, PA, in the “Weekend Hall of Fame” section of our 52 Great Weekends feature after a trip I took with my girlfriend last autumn. Yes, Gettysburg is one of the most important and somber sites in the history of the Civil War, and by extension, the nation; what we didn’t count on was how relaxing and comfortable Gettysburg has become as a destination. There are a number of great B&Bs, fine cuisine (of both the period-appropriate and more modern varieties), shopping, a handful of great bars, and plenty of peace and quiet (unless someone’s marching or re-creating.) If you haven’t made the trip, go now — with your family, with your partner, even yourself. One of Pennsylvania’s most enjoyable (and surprising) weekend trips.

And while we’re at it, please refer back to the After Dark from last month concerning Arsenal Cider House. My feelings on their 1800s-era brews are all contained there, but I have to add that I was surprised how versatile a drink the variety I’ve been sipping turned out to be; I’ve had it with and after dinner, by itself and with other beers, and always enjoyed it. They just brewed up some Smiling Sam’s Blueberry, so hurry down there — with the warmer weather, you should be able to pop open your growler and grab a seat outside while you sip.

To keep my Civil War experience rolling, I checked out a preview of the History Center’s new traveling exhibit, “The Civil War in Pennsylvania,” last weekend. It’s quite an impressive collection, mainly in that it succeeds remarkably in bringing some local 19th-century characters to life, via full-size, expressive figures. You’ll meet Kate McBride, who toiled at the ill-fated Allegheny Arsenal; Martin Delaney, the Pittsburgh abolitionist who would become the highest-ranking African-American to serve; the loyal companion and perhaps the bravest pooch to see action in the Civil War, Dog Jack, and more. The touring display is probably coming to a museum or history center near you soon (it’s at the Beaver Area Heritage Museum this weekend) so click here to check the full schedule.

And for the truly dedicated, mark your calendars for April 28. The Carnegie Branch of the Carnegie Library (yes, the Carnegie Carnegie) is hosting a full day of Civil War-era culture, from period music by the Carnegie Brass and a Victorian Tea Service to Artillery Demonstrations — even a Civil War Fashion Show. (Bloomers! Bloomers everywhere!) For the full lineup, head to carnegiecarnegie.org. (We really need to donate a statue of ol’ Andy to that branch, so he can be the Carnegie Carnegie’s Carnegie.)