She may have been a North Sider only briefly, but Rick Sebak still counts the novelist, poet and playwright as part of the former Allegheny City’s legacy. 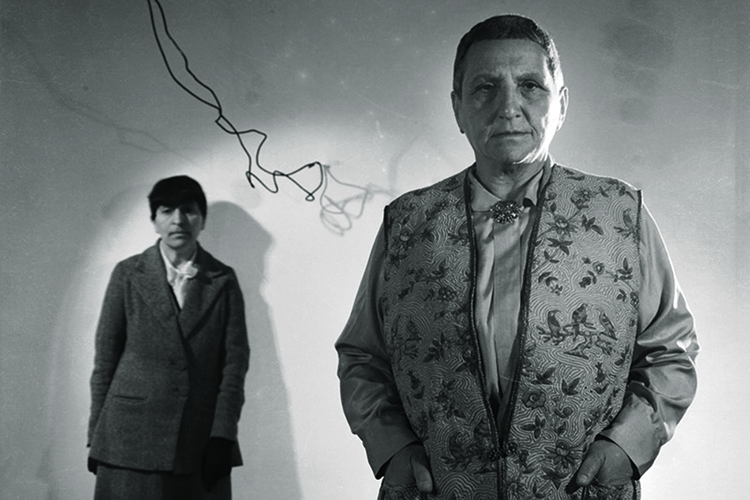 Among the many brilliant sentences composed by the unusual wordsmith Gertrude Stein, perhaps the two most famous are: “Rose is a rose is a rose is a rose,” which was part of her 1913 poem called “Sacred Emily;” and a very funny putdown, “There is no there there,” which she wrote about Oakland, Calif., in her 1937 book, “Gertrude Stein, Everybody’s Autobiography.” Starting in 1880, Stein spent several years in the California city; when she returned many decades later, the farm she loved was gone. So, no there there.

But we may still have a little here here. Gertrude Stein was born on Feb. 3, 1874, in a house at 850 Beech Ave. (although she may have known it as 71 Beech St.) in the neighborhood known now as Allegheny West. A bronze plaque on the front of the building marks where the newborn Gertrude lived — for only about six months — with her parents and four brothers and sisters, along with her uncle Solomon and his family.

Gertrude’s parents, Daniel and Amelia Stein, in 1864 moved to the region from Baltimore to open a “western branch” of the family’s clothing manufacturing and wholesale business, Stein Brothers. Their store occupied prime real estate at Fourth and Wood Downtown, but after 10 years, family tensions — especially between the brothers’ wives — led to the dissolution of the business. Both sides of the family left Pittsburgh; Solomon took his family to New York City, while Daniel and Amelia took their kids, including infant Gertrude, back to Baltimore for a few months. They eventually relocated to Vienna, Austria, where Daniel hoped his children would get a better education than they might get in America.

The family stayed in Vienna for three years, then moved briefly to Paris before Daniel Stein decided to return to America. After a cross-country journey by train, the Steins settled in Oakland, where Gertrude grew up on 10 acres of farmland across the bay from San Francisco.

She would go on to study at Radcliffe College before spending four years in medical school at Johns Hopkins University. In 1902, she left school and went to live with her beloved brother, Leo, in London. A year later, the siblings moved to Paris and started a legendary collection of new paintings in their apartment at 27 Rue de Fleurus on the Left Bank. It was there that Gertrude befriended painters such as Henri Matisse and Pablo Picasso, as well as writers including Ernest Hemingway, Sherwood Anderson and F. Scott Fitzgerald via her famous Saturday-night salon gatherings.

In Paris, Gertrude also met and started living with Alice B. Toklas, whom she would make immortal in her most popular book, “The Autobiography of Alice B. Toklas.” Stein wrote that book in 1933 as a sort of dual autobiography — with Stein using Toklas’ voice to tell both women’s stories. Speaking (as Toklas) of her own birth, Stein writes: “Gertrude Stein was born in Allegheny, Pennsylvania. As I am an ardent Californian and as she spent her youth there I have often begged her to be born in California but she has always remained firmly born in Allegheny, Pennsylvania. She left it when she was six months old and has never seen it again and now it no longer exists being all of it Pittsburgh.”

In 1907, Pittsburgh absorbed the city of Allegheny, and it is now known as the North Side — so indeed, the place where Gertrude Stein was born in some ways no longer exists. But the house is still there.

Gertrude Stein died from cancer at the American Hospital in Neuilly-sur-Seine, a suburb of Paris, on July 27, 1946, at the age of 72.

This article appears in the April 2016 issue of Pittsburgh Magazine.
Categories: Rick Sebak