A look back at our nation’s first president’s many visits. Don’t worry — we’ll save the best (and first) for last. 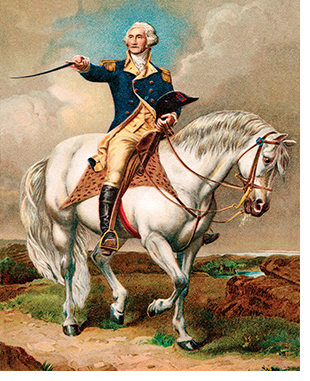 George Washington apparently had a fondness for our part of the world, visiting at least seven times in the 18th century. Here’s a quick rundown; we’ll save the best (and first) for last.

ON HIS SECOND TRIP: In 1754, Washington helped kick off the French and Indian War when he provoked a skirmish with French soldiers. He and his men were subsequently attacked (and many of his soldiers slaughtered) at the hastily built Fort Necessity in Fayette County.

ON HIS THIRD TRIP: As the war continued, he returned with Gen. Edward Braddock and colonial troops in 1755, bound for Fort Duquesne at the Point. His group was surprised and soundly defeated near what is now Braddock borough at the Battle of Monongahela.

ON HIS FOURTH TRIP: Washington was with Gen. John Forbes when British soldiers built a road across Pennsylvania in 1758 to convince the French at Fort Duquesne to get out of town. The outnumbered French fled.

ON HIS FIFTH TRIP: He wasn’t just a soldier. Washington was a farmer and investor, too, and he owned real estate in the area, including acres near Canonsburg and what is now Perryopolis. In 1770, he stopped in Connellsville, visited Fort Pitt, dropped in on a friend in Etna (then called Pine Creek) and took a canoe ride down the Ohio.

ON HIS SIXTH TRIP: In 1784, Washington did some research for Virginia Gov. Thomas Jefferson, who wanted him to investigate whether a canal linking the Potomac River system to the Ohio might be feasible.

ON HIS SEVENTH TRIP: In 1794, Washington — then President — led a force of 12,000 American soldiers as far as Bedford, when he found it necessary to put an end to the Whiskey Rebellion. This was the “first and only time a sitting American president led troops in the field,” according to historian Joseph Ellis.

But George Washington’s first visit, when he was only 21, may be the most remarkable. He volunteered to do some frontier diplomacy with the French, who were building forts in this part of the world.

ON HIS FIRST TRIP: Washington was a surveyor and a diplomatic messenger, coming first to the Forks of the Ohio — which he thought wonderfully suitable for a fort. After meeting with natives and brave residents of this wild territory, he and a small group set off in wretched November weather to the French outpost at Venango and then to Fort LeBoeuf, near Erie. The French weren’t intimidated by this young colonial major with his message from the British powers.

On his way back in late December — with poor weather and horses in sad shape — Washington and explorer Christopher Gist set off on foot, eventually trying to cross the icy Allegheny on a crude raft. The raft didn’t make it. Floundering in frigid waters, the men swam to a now-vanished island near the Lawrenceville shore (not the island later renamed Washington’s Landing) and lived to tell the tale.

Washington reported to Lt. Gov. Robert Dinwiddie of Virginia, who surprised the young surveyor by having “The Journal Of Major George Washington” printed for the public. It was widely read, and his engaging tale of travel, diplomacy and adventure did more to make the young man a noted leader than any legendary cherry tree.

This article appears in the February 2014 issue of Pittsburgh Magazine.
Categories: Rick Sebak