Garrett Jones Tosses Out the Script

Garrett Jones’ career has been anything but predictable. Now, the veteran power-hitter (and team leader) will try to reverse expectations once more. 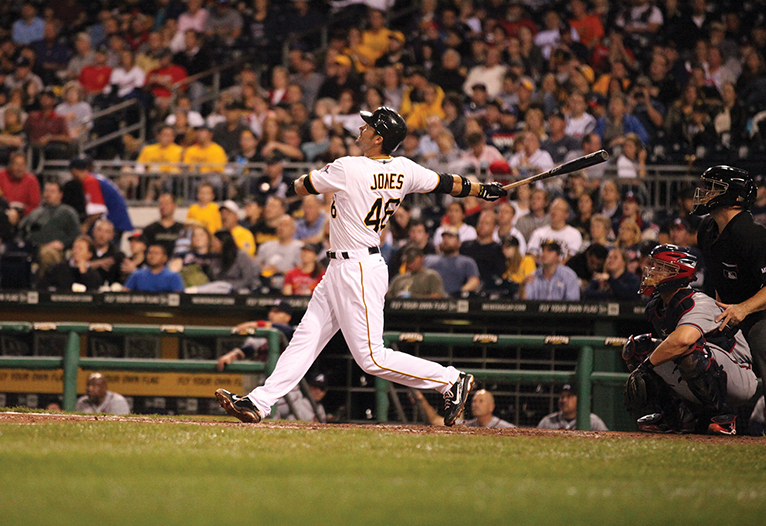 In the chaotic world of baseball, the script often changes. Every kid who trots onto a Little League field knows how it’s supposed to go: You play well enough as a teenager to get drafted. You work your way up, from quiet rookie-league play in Florida or Arizona through the minors. Sometimes you spend a year in the same uniform, sometimes less.

Then, after you’ve showed what you can do in Indianapolis (or Memphis or Scranton or Pawtucket or Salt Lake City), after the fans in the big-league city know your name and are calling local radio shows to demand you be given your shot, you’re called up. And you play the game you love at the highest level until you ride off into the sunset.

That’s not how it went for Garrett Jones.

Things started out well enough for the Harvey, Ill., native. Jones impressed scouts while playing at Victor J. Andrew High School in nearby Tinley Park. He was drafted by the Atlanta Braves as an 18-year-old in 1999. And after a few years at the lower levels of the organization, he was released in 2002.

Not part of the script.

He was quickly picked up by the Minnesota Twins, and things were back on track. Jones began advancing, year after year, into his mid-20s. He began 2005 with the Rochester Red Wings, the Twins’ AAA affiliate. Then he began 2006 there. And 2007, too. Finally, in May of that year, the call came, and Jones was bound for the big leagues at last … where he appeared in 31 games, batting .208. When the 2008 season started, he was back in Rochester yet again. After spending one more season waiting for a call that never came, Jones was released.

Not part of the script.

So when the Pittsburgh Pirates picked up Jones later that year, he threw the script out the window. It was time to relax and hope for the best. He knew that plenty of good players never got a second shot — and rather than let that fact defeat him, it put him at ease. No more pressure; just show up.

After a few solid months in Indianapolis, he was called up for another chance at the majors on June 30, 2009. What happened next has passed into Bucco lore: Jones hit 10 home runs in his first 19 games, en route to smacking 21 dingers to go along with 44 RBIs and a .293 average. He was selected as the National League Rookie of the Month in July; he finished seventh in the Rookie of the Year voting, having led all N.L. rookies in homers, despite only playing half a season.

And you know what? None of that was part of the script, either.

Since that dramatic debut, Jones has become a fixture on the Pirates roster and a consistent offensive threat. While he continues to struggle against left-handed pitching, he’s one of the most effective hitters in the league against righties; in 2012, he batted .274 and added another 27 home runs.

At the start of this season, Jones knew that flashes of success for the ’11 and ’12 Pirates meant high expectations. But from his perspective, that’s not all that different from what he faced in 2009. The script, apparently, will write itself.

“We’re having fun, and we’re doing our job. Our whole mindset is on the season. Everyone’s fired up for it, and we’re here as a team.” – Garrett Jones

You had been in the Pirates organization for less than a year when you came to Pittsburgh in 2009; it’s safe to say that many fans weren’t familiar with you until you were wearing black and gold. Looking back, what was that year like?
Kind of surreal. I felt relaxed being out there, and it felt good to be back in the big leagues. I knew what I could do, [so I thought:] relax and just play the game. With the Twins, I didn’t do that — I put too much pressure on myself to do well. I was fortunate to get a second chance, and I was going to make the most of it.

Do you see yourself as a leader in the locker room? How do you approach your role as you’ve become a veteran on the team?
I try to be there for guys, if they want to talk about things. I like to have fun and goof around. I think that helps keep everybody loose. I’m all about team chemistry. You have to think like a winner to be a winner. 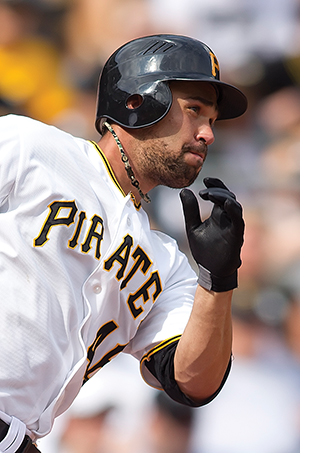 Throughout your career, you’ve hit remarkably well in tie games. How do you approach those at-bats?
Just [by] psyching myself up — and loving to be in those high-pressure situations. It’s a luxury, and when you get the job done, it’s really rewarding. You’re not always going to come through, but I believe in myself.

At this point, do you still try to find ways to improve against left-handed pitching?
You’re always making adjustments and trying to get better — and pitchers are trying to adjust to you. I made a little adjustment last year and got some extra starts against lefties. I just try to work on being a little bit more consistent.

From your vantage point, what happened to the Pirates in the second half of 2012?
It’s hard to explain. I think we just got caught in a rut and couldn’t get out of it. Every team goes through that, but unfortunately, we went through it at the end of the season. We’d be pitching well, but we couldn’t hit. Or we’d hit, but the pitching would fall off. You can try to figure it out, but in the end, we didn’t get the job done on the field. I think we know we have to finish this year.

What can you change to prevent a similar result?
Staying positive, staying confident, staying loose — and not changing our mindset if we do get in a rut. Just have fun out there.

What have you seen so far that gets you excited for this season?
Just the team chemistry and camaraderie. Everyone gets along, everyone’s on the same page — and we believe in ourselves. We’re having fun, and we’re doing our job. Our whole mindset is on the season. Everyone’s fired up for it, and we’re here as a team.

This article appears in the May 2013 issue of Pittsburgh Magazine.
Categories: From the Magazine, Hot Reads, Pirates