The past repeats itself as A.J. Burnett loses control at Busch Stadium. 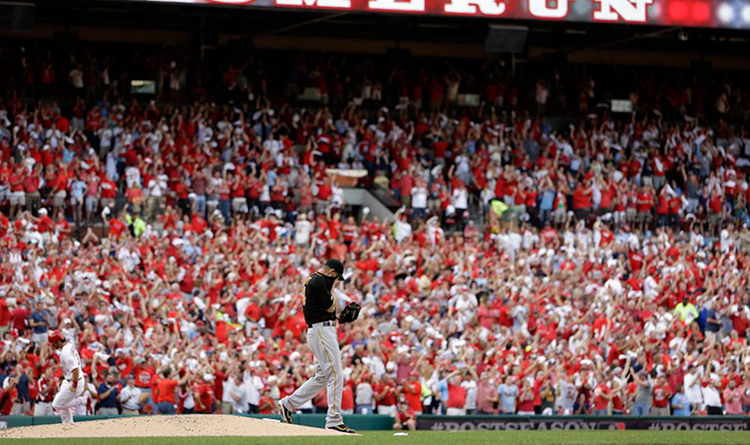 If you’ve watched either of the Pirates’ first two playoff games on TV, you’ve no doubt noticed that TBS has made the irritating decision to place a pitch-tracking graphic — sorry, PitchTrax — to the right of the batter at all times.

Most networks introduce that dubious technology only when looking to illustrate the movement or placement of a particularly impressive or controversial pitch, but TBS just leaves it there at all times — much to the dismay of the viewer who prefers watching a baseball game to analyzing a complex graphical readout.

Among the problems with that technology: It’s not tremendously accurate. It might catch up to reality eventually, but early indications are that the umpires — not error-proof themselves, admittedly — generally get it right more often than the computers.

That’s on close calls, though.

For many of A.J. Burnett’s pitches yesterday evening, PitchTrax did a fine job of illustrating what we had just seen: Almost everything he threw was off-target, often at a great distance from any definition of the strike zone. The box allowed for a good two feet of error on every side of the zone; by the time Burnett was yanked after the disastrous third inning, his pitches threatened to burst through PitchTrax’s frame and register somewhere near the TBS logo.

Clint Hurdle was criticized by some for not pulling Burnett sooner, but if any pitcher can settle himself, it’s Burnett. In the third inning, he simply lost control. Not always by much, either. But when facing a lineup as formidable as the Cardinals, small errors are all it takes to open a series with a dismal 9-1 loss.

If there was any error in judgment in the Pirates camp, it may have been giving Burnett the ball in the first place; his career regular-season ERA at Busch Stadium is 8.10. I’d be happy to see A.J. on the mound Monday at PNC Park; if the series goes to a game five, though, there should be no discussion of him seeing a St. Louis crowd again.

At least the Shark Tank was in effect: Jeanmar Gómez, Vin Mazzaro and Bryan Morris combined for six innings of work allowing only two runs (neither of them earned, as a result of an uncharacteristically bad three-error performance by the Bucs). And El Toro has recorded his first postseason home run, launching a 437-foot missile into the right-field stands in the top of the fifth. (Let’s not discuss the rest of the offense.)