Everything (or at least a lot of) old is new again at Youngstown’s Butler Institute of American Art, including folk-art galleries and more. Make a resolution to visit in 2015. 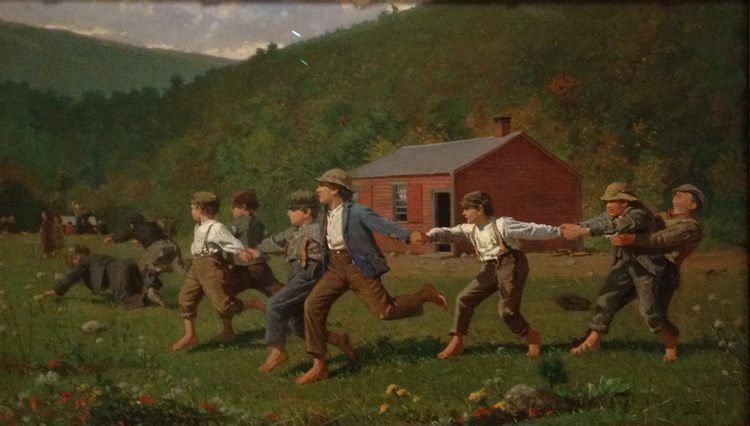 Every time I return to the Butler Institute of American Art, I forget that Winslow Homer’s “Snap the Whip” is not as big as I seem to remember it from previous visits. That’s a memory phenomenon, I’ve heard, about getting older: Things from the past seem smaller when we experience them again.

This crown jewel of the collection — a lyrical, masterful homage to a vanished America — is just 3 feet by 2 feet within its gilded frame. Perhaps the painting’s distinguished reputation also factors into the memory inflation.

It was true again for me during a recent visit, when I enjoyed revisiting old friends and seeing what’s new: notably folk-art galleries and recent accessions to the permanent collection, including Jackson Pollock’s “Silver and Black” and Norman Rockwell’s “Lincoln the Railsplitter” — and that really is big.

The Butler is just an hour’s drive from Pittsburgh, so consider a New Year’s resolution to visit or go again. This museum combines a bit of the pomp of Carnegie Museum of Art with a dash of Mattress Factory quirkiness. It’s a nice size, a bit maze-like at times — but it’s easy to navigate, and it’s not overwhelming or overtaxing; you can take it all in during a leisurely afternoon.

Established in 1919 by local industrialist Joseph G. Butler Jr., it was the first museum in the United States devoted solely to American art. The original building, a sweet little Beaux-Arts gem, was designed by — genuflection, please — McKim, Mead and White, one of America’s greatest architectural firms.

Like a living, growing organism, the Butler has pushed out from its original building through the years with several additions and a Trumbull satellite branch in Howland Township, Ohio.

The latest addition at the main site is something from the past. The museum in 2005 acquired the former First Christian Church, a Gothic Revival landmark next door. It has joined the campus — in one way literally — via a glass-enclosed skywalk, which leads to the new galleries.

In contrast to that, the Beecher Center in the main museum complex presents more ethereal, edgier digital and electronic art, with computers, holography, lasers and other high-tech media. Particularly stunning is a series of eerie hologram portraits by Ana Maria Nicholson capturing famous faces, including artist Keith Haring’s.

Elsewhere in the museum, look for a special salute to father and son artists Andrew and Jamie Wyeth, a set of miniature paintings of American presidents and a gallery dedicated to sports. That includes a Lance Richbourg portrait of Roberto Clemente, lithographs by George Bellows and an in-your-face, über-realistic sculpture, “Mr. USA,” by Marc Sijon.

Speaking of art: Many special exhibitions are on the Butler’s 2015 schedule, notably the Associated Artists of Pittsburgh Annual, at the Trumbull Branch from June 7-July 19.