Tech giant Google has moved into its new location in Bakery Square and is searching for brilliant minds.

Google: A dozen years ago, it wasn’t even a word yet. In 1997, Sergey Brin and Larry Page dreamed up this play on the word “googol,” which is the mathematical term for 1 followed by 100 zeroes. The rest of us didn’t hear it until the following year, when their oddly named search engine debuted, and the world took notice. Today, this high-tech giant has become stunningly central to the lives of people all over the globe.

More than 150 employees are now working for Google at its new Pittsburgh office, and the company is actively recruiting more. But what does it mean for the Pittsburgh region now that Google is here?

What began in 2006 as a two-person team located at the Collaborative Innovation Center (CIC) at Carnegie Mellon University has expanded into a thriving corporate office. In December, Google moved to East Liberty’s new Bakery Square in order to accommodate the company’s growing roster of talent in the area. Then just one month later, Google announced that it will expand its space in the complex by an additional 70,000 feet, clearing room for up to 350 more potential employees.

Read more on Google Pittsburgh:
What Happens in the Google Office?
Where the Past Meets the Present

Pittsburgh is a region of notable colleges and universities, but CMU is known as the powerhouse for high-tech teaching and research. The school has maintained a relationship with Google since the company launched, and nearly 300 CMU alumni have been hired by Google worldwide, according to the university. CMU is also where Google’s local office was born. The CIC opened on campus in 2005 as a research lab where technology companies could collaborate with the university on new ideas and products. It was Google’s home until its move to Bakery Square.

Andrew Moore was a CMU professor of computer science and robotics when he was hired as Google’s first Pittsburgh employee, based at the CIC. He remains the Google engineering and site director.

Despite moving off CMU’s campus, Google will remain closely connected to the school, Moore says. “We’re doing everything we can to mitigate the effect of not being on campus.”

He credits CMU with giving Google’s local staff the perfect space to grow amid brilliant minds grappling with complex research problems. And he sees the school and its partnerships with companies like his as the reason for Pittsburgh’s emergence as a high-tech hot spot.

“That was seeded by the growth of CMU in the 1970s,” he says, “and in the late ’90s, an explosion in folks doing work on information technology and medical information, which led to the software-engineering component of the town.” All of that, he says, has led to the Pittsburgh region’s reputation as “a place for industry as well as academics.”

Google’s presence and growth in Pittsburgh have drawn attention to CMU’s role in bringing world-class computer scientists and engineers to the region. And it has raised the profile of the CIC, which also counts Apple and Intel as current tenants. In fact, Google’s former space at the CIC has been taken over by a large team of Disney researchers doing cutting-edge work on things like computer animation, robotics and virtual reality.

Pittsburgh Technology Council president Audrey Russo sees another benefit to CMU’s very public connection to Google: As CMU gets attention on the global stage, and as the University of Pittsburgh also earns increasing attention in the high-tech world, “it has a sort of domino effect to the 25 or 30 other schools here.”

Researchers at the smaller area schools are motivated to compete with the larger schools, and there are strong relationships within the academic community that lead to new collaboration.

“It doesn’t happen overnight,” she says. “But there’s a really exciting positive combustion happening. … Robert Morris is starting to do some research, and don’t underestimate Duquesne’s IT school.”

Google’s exponential growth in Pittsburgh has helped that viral effect spread throughout the technology community.
The company’s approach to hiring is uncommon: Rather than limiting the number of available slots in any given office, Google is open to hiring as many brilliant minds as it can find. For accomplished computer scientists and for young talent, that makes any place with a Google office very appealing.

It’s also a boon to smaller companies here because it’s a reciprocal relationship: Smaller technology companies, like Lawrenceville-based Songwhale, are able to draw top-notch talent because those candidates know they can perhaps jump to Google’s Pittsburgh office at some point.

And Google benefits from the presence of those smaller companies and startups because talented people considering a Google job in Pittsburgh know they can go elsewhere in town if they’re not happy working for the tech giant.

“Having Google here is really significant because it’s creating awareness,” says Ty Morse, CEO of Songwhale, which specializes in helping companies to effectively use mobile communication technology. “You certainly had kind of a feeling beforehand that people coming into the city to be educated were immediately looking to go to either coast once they graduate. … But Google being Google, we have people taking a second look.”

It’s been less than three years since Morse relocated his company to Pittsburgh, and since then, it has grown by Google-like proportions: The original team of three has expanded to more than 100, and Google’s presence may have helped that happen.

This is crucial, Russo says, because “talent comes in pairs.” Successful engineers are often married or partnered with other gifted engineers. And those good people aren’t likely to come unless they trust there will be challenging, plentiful work for their significant other. 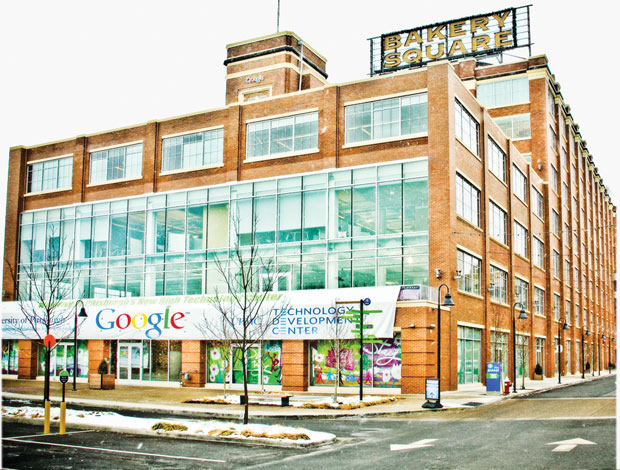 How does all of this affect the many Pittsburghers who don’t work in technology?

The city’s “investment in Bakery Square was seen as a risk,” Mayor Luke Ravenstahl said during a ceremony at the opening of Google’s office there in December. But Google’s decision to be based there has proved critics wrong. In December 2001, the city gave Walnut Capital, owner of Bakery Square, a $10-million tax-increment financing package to redevelop the former Nabisco factory, which closed in 1988. It brings attention to a great model for Pittsburgh’s economic transformation: repurposing former manufacturing spaces for high-tech use.

Google’s space still contains an enormous cookie-dough mixer and the scorched wood factory floors from its Nabisco days, and Moore sees that atmosphere as perfect for his employees. “The work we’re doing here toward advertising targeting is safely one of the biggest software challenges of anything in the world,” he says. Although it’s not the same as physical manufacturing, “it’s consistent with Pittsburgh’s past of doing large-scale engineering.”

Read more on Google Pittsburgh:
What Happens in the Google Office?
Where the Past Meets the Present

Beyond Bakery Square, Google’s decision to be based in East Liberty is a boost for that neighborhood. Some Google staffers have chosen to live there because of the opportunity to walk or bike to work, and the company encourages it: There is a locked parking area for bikes in the parking garage and loaner bikes are available for visiting Googlers.
Google staffers also work with local community groups and students to share their knowledge and encourage scientific study and experimentation.

“It’s really important for the country and the world that we’re building the next generation of technologists—smart people who can change the future,” Moore says. His team makes time to “show folks in middle school and up what life is like if you’re one of these people changing the future.”

In introducing its guiding principles on its corporate website, Google says it “became successful precisely because we were better and faster at finding the right answer.”

Today, Pittsburgh is seeking the right answer to a crucial question: How do we become an even bigger center of high-tech business? Google is just part of that answer.

“It’s fantastic that they’re here,” Russo says, “but Google can’t do it alone.” As she points out, “We have to work hard on having an even more accelerated and stronger pipeline” of top-notch people. “If there are smart people working on hard problems right at your doorstep,” you’ll get further with your own challenges.

Companies, she says, “love that kind of contagion.” They’ll come to Pittsburgh if they know it’s happening here.

But, she cautions: “Corporations don’t uproot headquarters” in this economy, she says. “You’re not going to lift HP and bring them here.” It’s more likely that we can replicate our experience with Google and attract more satellite offices of major companies.

And through continued tax incentives from the city and state government and further networking among the business and technology communities, the Pittsburgh region can continue creating a thriving atmosphere for fledgling companies.

It’s important, says Songwhale’s Ty Morse, to let more companies know what’s here. He cites not just the low cost of living and great quality of life, but the frequent networking among companies and the willingness of the city’s “movers and shakers” to work directly with even the smallest companies.

In the meantime, Russo credits Google with constantly pushing the technology and business communities here to “raise expectations.”

Google has become many things to many people: an information conduit, a communications tool and an aggregator of a stunning number of facts and figures. But it began as one simple thing: A uniquely named, fantastically efficient search engine.

Will it also serve as a fantastic engine of growth here in Pittsburgh? At the celebration of Google’s move to Bakery Square, the mayor pointed out that after growing from two employees to more than 150, the company’s Pittsburgh office might well “add a few hundred more.”

Google isn’t committing to that. But they’ve set no limit on how big this office may become. “We’re growing into the next stage,” says Andrew Moore, glancing out a window toward the rooftops of East Liberty. “And we’re recruiting intensely.”

Melissa Rayworth writes about a mix of cultural issues—from popular culture and sexual politics to home design and parenting—for a variety of national news outlets, including The Associated Press.

This article appears in the February 2011 issue of Pittsburgh Magazine.
Categories: Community Feature