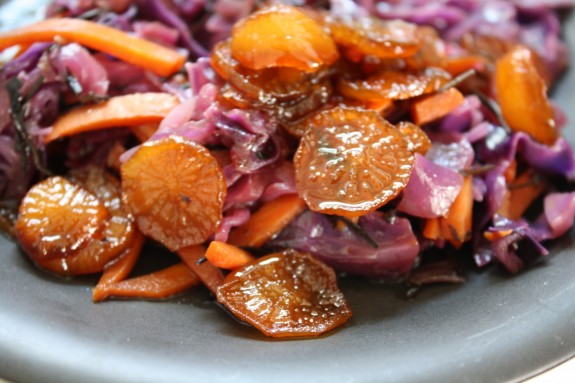 Let’s face it. As of this moment, we are in the big black hole of New Year’s Resolutions. At this point, any thoughts of your 2012 resolutions have evaporated into the void. It’s that time of year when we let go of those last bits of willpower, embrace fallibility and — with a sigh of relief — dive with an enthusiastic jackknife into the pool of bacchanalia that is the 40 Days Between Thanksgiving and New Year’s Eve. At this time, my friends, we are essentially making ourselves foie gras for diet product purveyors and crash diet book publishers.

But should we really throw our hands up in the air and completely wave the white flag?

Because in between the nights of too much puff pastry*, you can fortify yourself with deliciously righteous dishes that allow you to enjoy the season without guilt.

This dish is one of them. Red Cabbage with Arame and Caramelized Radishes. Don’t fret – its not complicated, you’ll see. But let’s dissect the ingredients a little to see why this dish should be in your arsenal. 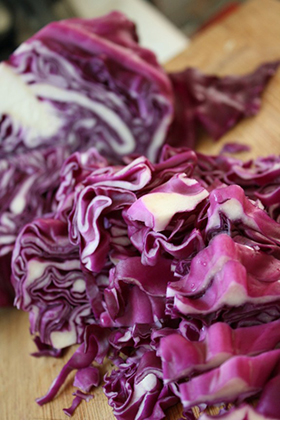 Cabbage is from the brassica family of vegetables, which also includes broccoli and cauliflower. Brassicas are known to contain phytonutrients that trigger detoxification.

Arame is a very mild tasting sea vegetable known to boost the immune system. It is also fiber rich – helping you usher transit in the digestive system.

Radishes are fiber-rich as well and very high in the most famous antioxidant of all, vitamin C.

So there you have it. The really fun part? It tastes amazing.

The cabbage recipe is from Terry Walters and the radish recipe is an adaptation from Alicia Silverstone’s The Kind Diet. Together, they are pure magic.

The radishes are novel and absolutely brilliant on their own. Most people eat radishes raw in salads. Meh, I say. Roasting radishes opens up the horizon.

Braising the thinly sliced radishes in sweetened tamari makes them take on a rich, golden color — almost like jewels. So pretty. Alongside the purple cabbage flecked with black streaks of arame, this dish is so beautiful, I have actually elevated it from an “in-between parties” dish to a spot on my holiday table.

*I know, I know, you can never have too many puff pastries!

1. Soak arame with 1:4 ratio of water for 15 minutes, drain well and set aside.
2. In large skillet over medium heat, saute onion in oil until translucent (about 3 minutes).
3. Add carrots and saute another 2-3 minutes.
4. Add cabbage and tamari and saute until all vegetables have softened.
5. Add seaweed and cook to heat through.
6. Remove from heat, add vinegar and toasted sesame oil.

*If you do not have ume plum vinegar, believe me you will love it. Maybe too much. It is a strongly salty vinegar that is available at Whole Foods and your local co-op. Try it. You will like it.

1. Place the sliced radishes in a skillet.
2. Mix all the other ingredients and cover the radish.
3. Bring to a boil, then reduce to a simmer.
4. Cover the skillet and simmer until all the liquid is absorbed.

To Serve:  Toss radish and cabbage sauté together.