Fundraiser Puts the 'Brrr' in Waynesburg

Instructor of criminal justice James Tanda led a group of about 20 students into the 38-degree water on Dec. 6 as part of the Pittsburgh Polar Bear Plunge weekend. 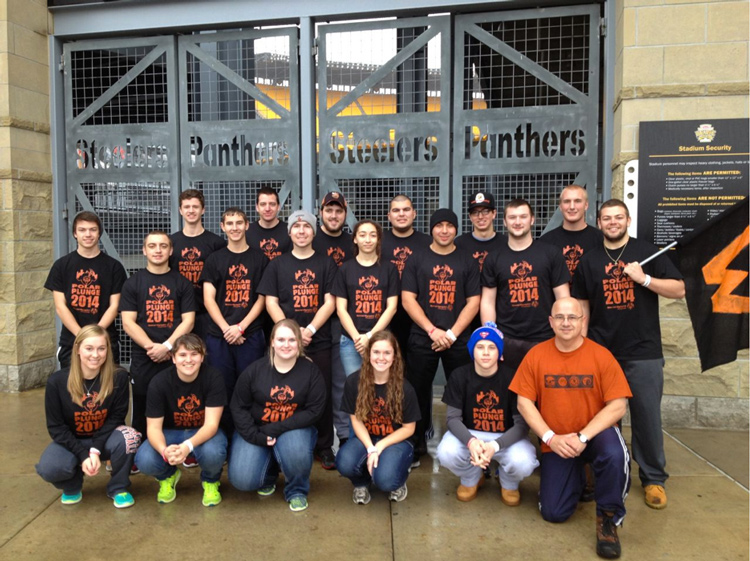 WAYNESBURG UNIVERSITY CLUB DROPS TEMPERATURE TO RAISE MONEY
Waynesburg’s criminal justice club raised more than $1,500 for Special Olympics, and all it took was a December dip in the icy Ohio River along the North Shore. Waynesburg instructor of criminal justice James Tanda led a group of about 20 students into the 38-degree water on Dec. 6 as part of the Pittsburgh Polar Bear Plunge weekend, Special Olympics Pennsylvania's largest fundraising event. Aware of the power of the fundraiser, Tanda wasn't about to get cold feet; he has participated in the plunge in each of the four years since its start. He says half of the money raised by the club will go to Greene County's Special Olympics program.
(Photo courtesy of Waynesburg University)

SLIPPERY ROCK UNIVERSITY ON TRACK TO BEGIN PHYSICIANS ASSISTANT PROGRAM
Slippery Rock's goal to add a master of science in physician assistant studies degree is closer to being realized. The school submitted its program plan to Pennsylvania's State System of Higher Education's board of governors and is setting up the framework to purchase the program's headquarters, a single-story building that previously was the site of Har-Mer Elementary School. If approved by the PASSHE and by the Accreditation Review Commission on Education for the Physician Assistant Inc., the program's tuition pilot program would add $500,000 in scholarship funding and increase fees for courses and labs in STEM-H fields. The two-year program could begin classes in summer 2016.

GRANT WILL HELP DUQUESNE UNIVERSITY PROFESSOR READ PERSONALITY FROM WRITING
Personality is intertwined in a writing sample, says Duquesne's Dr. Patrick Juola, a professor of computer science who revealed J.K. Rowling's work on a pen name. Now, thanks to a $25,000 grant from Innovation Works that is provided by the Pennsylvania Department of Community and Economic Development, Juola has the funding to conduct research on just how much personality can be extracted from writing. Juola will use the money to help develop software that will tell more about people from their writing samples than oft-used personality test questions can, which he says is "taking advantage of technology and leveraging it in a new direction."

This article appears in the December 2014 issue of Great Minds.
Categories: Great Minds