From Laptop to Stovetop

Five lessons this blogger learned from being a chef for a night, and a brief history of Bar Marco’s Amazing No Menu Monday. 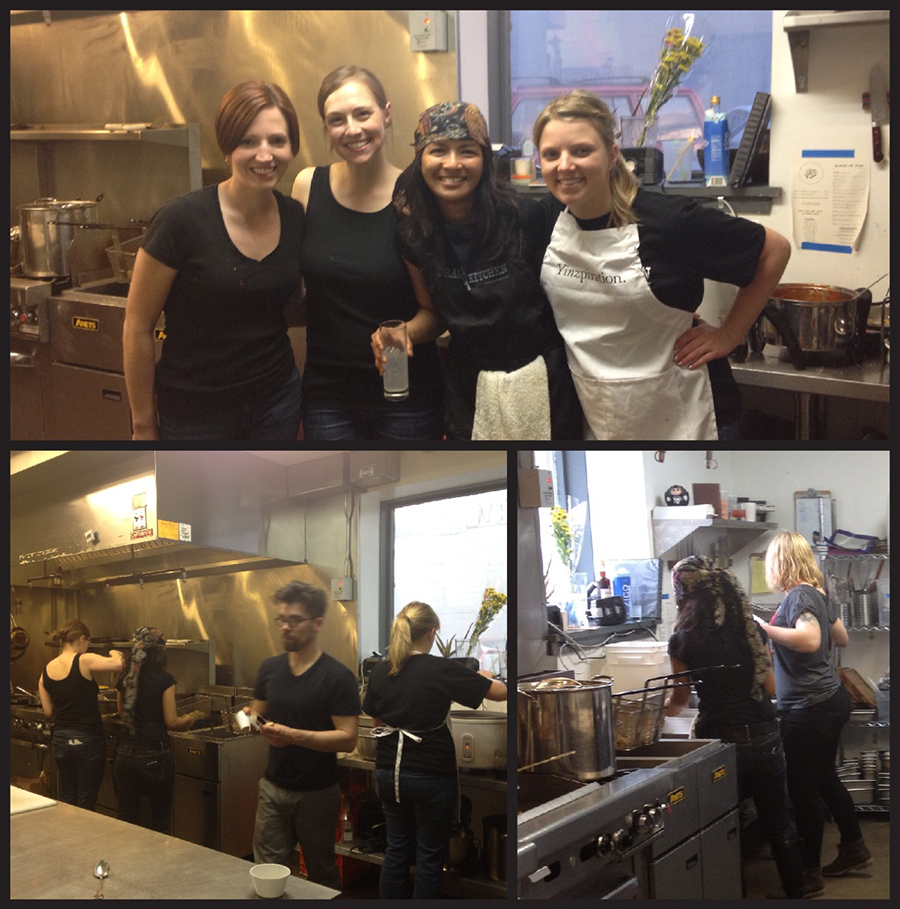 After 24 hours, I can almost stand on my feet again.

Lesson Number 1: Platform wedge boots are not acceptable surrogates in the absence of chef’s clogs.
You can write about food in heels, while sitting down, but you better get sensible shoes if you’re going to work in a restaurant kitchen for 8 hours.

Yes, I played chef-for-a-night at Bar Marco and had one of the best times of my life while raising money for the Obama High School Cooking Club – a Food Revolution Pittsburgh project led by Bobby Fry and Kelsey Weisgerber.

Along with Kate Stoltzfus of Yinzpiration, I helmed Bar Marco’s No Menu Monday on April 8. We served 80 diners a three-course meal made from scratch, and we served with love. It was an amazing experience and one that showed me how easily Pittsburghers will go to bat for a good cause.

As soon as we knew the date, I asked Dozen Bakeshop, Wigle Whiskey, Mediterra Bakehouse, Olive & Marlowe, Zeke’s Coffee, Sugarmaid Stroopwafels and Oh My Goodies Bakery to donate some of their wonderful food and products for the dinner. Every one of them said a resounding YES. Pittsburgh magazine, Nasoya Tofu and So Delicious Dairy Free also contributed to the evening. Even Fukuda responded to our S.O.S. for a high capacity rice cooker. There was no way this was going to fail. It was going to be … wait for it …

I multiplied a macaroni sauce recipe by 10 and ended up with mustard. ON THE DAY OF THE DINNER.

Lesson Number 2: Sure, double a recipe. But you should sure as heck make sure that it can follow a linear progression safely if you’re going to go beyond that.
Duh. Having cooked as much as I have, I should have known this. At home before the event, I used up all my budgeted ingredients and didn’t have time to go on a supply run, so I called on to the gods of improvisation and tweaked like I’ve never tweaked before. Finally, I iterated a version that I could live with. It was 3 p.m. Kate and I agreed we would meet at 3 p.m. You should have seen me load the car.

I was 30 minutes late, but the big kitchen was comforting. Giuseppe and Heather, two of Bar Marco’s superstar staffers, were warm welcomes. And just looking at the goodies from all the donors (Bread! Cupcakes! Coffee! Olive oil! Cookies! Truffles!) was enough to give me a sugar high. We spotted Fukuda’s rice cooker, greeted it with joy, filled it and turned it on.

We looked at each other and the first beads of sweat started to form on our foreheads, but neither of us dared to show fear. We moved on to the next task, hoping the rice cooker decided to work while we were ignoring it.

We mapped out the kitchen and where we would put our hardware. We were serving three courses: a salad and bread starter, two choices for entrée with sides, and an assortment of petite treats for dessert. We turned on all the other equipment we needed.

Back to rice cooker.

After we mustered some Negroni-induced courage, we decided to try again. The gods looked upon us with favor. Yes, it turned on. We were ready to roll!

Lesson Number 3: Mise en place is not just a fancy French phrase. It will save your life.
Our peeps from the Highland Park Kitchen Co-op completed the kitchen team – Amanda Gillespie, Bridget Peterson, Alaina Newell and new Pittsburgh transplant Andrea Danielson. Chef Justin Steel helped us navigate the kitchen (we are forever grateful!)

With five people (plus Chef Justin) working the kitchen, multiple parts to a dish, servers coming in and out and orders coming in quick succession during the rush hours, we had to streamline the operation to ensure that we didn’t constantly bump into each other and accidentally get pushed in the deep fryer.

But seriously, we pwned it.

However, it’s one thing to get the orders to the tables on time, and it’s another to make sure that each plate is consistent.

Lesson Number 4: Timing and consistency are tricky variables to combine.
The collard greens at 5 p.m. and the collard greens at 9 p.m. weren’t quite the same. I tried to do my best by turning the burner off to keep the greens from melting away too much (not a fan of overcooked greens myself), but I needed to make sure that they weren’t served cold.

I knew I could reheat them in a pan per order, but the plate I was serving had three main parts and two little ones (devil in the details!) Timing would suffer. So I made do with periodic heat-ups on the big pot o’ greens. Same with the mac and cheese, and let’s just admit that some fritters may have been crunchier than others.

Kate’s awesome Chicken Mirabella needed some orchestration, too. We needed to keep some of it warm in the oven and some on the stovetop ready to serve. The key was to keep the dish warm but also not let it dry as the evening wore on. Thankfully, we seemed to have succeeded — everyone loved the saucy chicken and the fresh fried fritter platter!

In the end, we served for five hours and achieved No Menu Monday record sales. We ended the night with cocktails and cake. There was no other way.

Lesson Number 5: Pittsburgh is all love.
If you Tweet it, they will come. Happily, gladly, and with many miles traveled to get there.

We want to thank all of YOU who were part of the evening. We want to thank everyone who helped us along the way: The Highland Park Food Co-op: Maya Henry, John Sawyer, Melissa Horst and Leah Helou. Friends: Elizabeth Gilgunn, James Rich, Hoon K, Dana Waelde, and Jess Pedersen, my co-Ambassador with Food Revolution.

Special thanks to mi famiglia, Awesome Pittsburgh, for holding their monthly meeting at The Union Hall upstairs so they could support the event.

Everyone who shared the Facebook event, who tweeted, who spread the word.

All of you who contributed to food education, to fighting for real food.

To the Obama High School Cooking Club — it has been an honor and a pleasure to support you!

PS. Recipes for the Vegan Southern Platter next week! (See below) 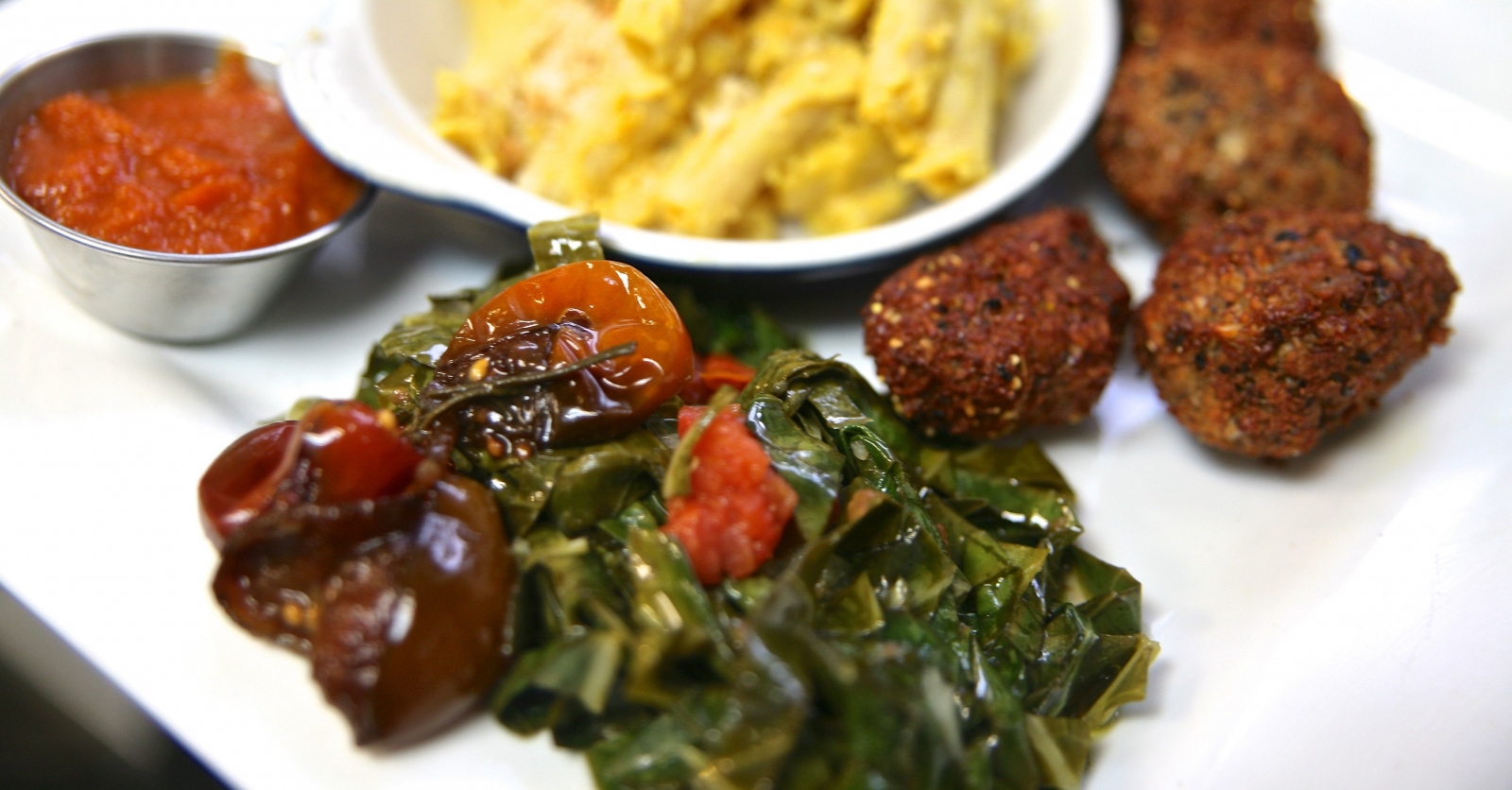 A Brief History Of Bar Marco’s No Menu Monday

Bobby Fry shares with me how this evening with a cult-following came about.

“No Menu Monday started after I got back from staging in Washington, DC, at the Columbia Room. Derek Brown is one of the world's best mixologists and owner/managers. The Columbia Room is a reservation-only cocktail bar. All reservations are two hours long and most patrons opt for the three course, pre-fix cocktail menu.

The first cocktail is a punch they create which changes weekly. The second is their “cocktail of the week” paired with a small plate of food. For the third, the bartender asks the diner’s likes and dislikes and makes a cocktail based on their answers.

When I returned to Pittsburgh, I was inspired and wanted our bartenders to have the chance to exercise and expand their craft. We were not open on Mondays and Tuesdays, so I figured why not open on Mondays with no menu and see what happens? We dubbed it No Menu Monday.

We started with just charcuterie at the bar with Justin Severino (of Cure) making the plates with his meats and such. However, he went out of town for a while, and I thought, “Hm, why not invite other chefs and just let them do their thing? The kitchen is closed anyway.”

That idea morphed into, “Hm, why don’t we invite cooks at other restaurants who have mapped out their style and concepts in their head and want to see what they can do for a night?”

Then we started asking non-profits if they wanted to run a kitchen for a night. Now we are booked for No Menu Mondays a month or so in advance! It’s a wonderful thing.