PittGirl faces her fear of flying with the help of the Air National Guard. 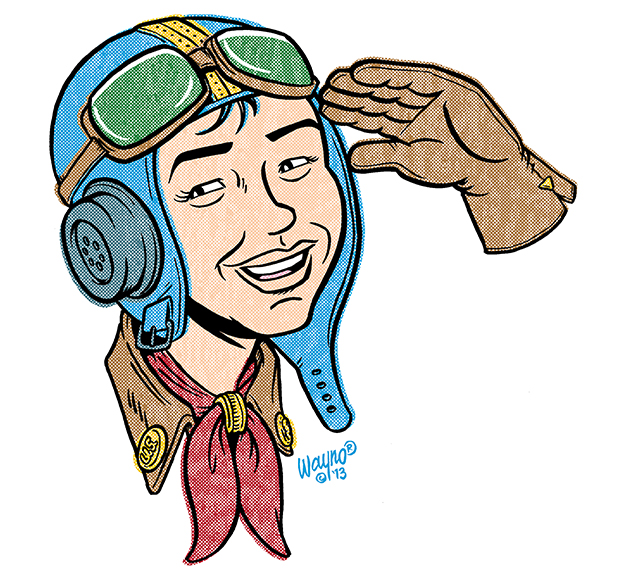 If you ask my 10-year-old son to imitate me during airplane takeoffs or turbulence, he will sit down, wrap his arms around his waist, tuck his head snugly between his knees and chant, “Oh, God. Oh, God. Oh, God.”

I’m fully aware of my mortality; therefore, hurtling through the air 30,000 feet above the ground at speeds approaching warp-drive miles per hour while shackled to a reportedly flotation-capable cushion in an aluminum canister of fiery death causes me weeks of stress before departure.

One time, I even gave myself a diagnosable case of IBS from the stress of an approaching flight. My doctor said it was acute sissiness and stage-4 fraidy-cat-edness. On a plane, every bump is the end times, every knock is catastrophic engine failure, and every landing is a cry out to Jesus to spare me.

If I were smarter, I would do what my older sister does: Valium. She pops one before takeoff, and 10 minutes in, she’s absentmindedly eating cookies between unexpected five-second, mouth-gaping naps. Valium is her co-pilot.

When the 171st Air Refueling Wing of the Air National Guard invited me to take a flight with its pilots while they demonstrated their in-air refueling capabilities, my lips said “Yes!” without any hesitation … and my brain said, “So this is how you’re going to die. My money was on a Nutella overdose.”

I hugged my kids and husband extra tight the morning of the flight, and showed up at the base for a pre-flight briefing. I settled in to learn about the 171st, the route we would take and the men who would be holding our lives in their hands. They’re guardsmen, engineers and teachers who dedicate one weekend a month to serving their country and training for missions.

I learned what an asset the 171st is to not only Pittsburgh’s economy, but to the U.S. military as well. I almost forgot about my fear of flying … until we were informed the KC-135T Stratotanker we would be flying in was more than 50 years old. I resisted the urge to tuck my head between my knees right there in the auditorium. I like my planes young, and here I was about to step on a plane as old as my mother. (No offense, Mom.)

Once on the plane with 10 other guests and three pilots, we were told what to do if there was a loss of pressure (Me: “Panic.”), and how we would exit the plane should there be an emergency (Me: “With our heads bowed and in our hands while chanting, ‘Oh, God. Oh, God.’”).

I looked those men in their eyes. They stood with their shoulders sure and their stance wide. They exuded an unmistakable sense of calm. I buckled into a bench alongside the wall. We roared down the runway and up into the blue sky. And I was unafraid.

I had no need to deposit my face in my knees because these men were military, and they had trained to always be on the ready. I drank in the blue skies and puffy clouds.

Then as we were flying over Ohio at 450 miles per hour, an Air Force jet approached the rear of our plane and flew steadily near the tail to await a practice refueling. In commercial flights, two planes flying within a mile of each other is considered a “close call.” I was looking the jet pilot in his eyeballs.

I turned to the airman next to me and said, “I’m normally afraid to fly. I’m not right now.”

Right. Because it’s them.

They let me sit in the cockpit while landing the plane safely back in Pittsburgh. They can have a plane in the air, if need be, within minutes. It’s they who have served in Afghanistan, Iraq, and Libya. They look after families and hold jobs alongside their service to their country. They took me up, brought me back and erased my fear.

But if you’re flying out of Pittsburgh on a commercial flight in the near future, I’ll be the girl with her face in her knees sitting next to a 10-year-old boy who’s saying, “It’s going to be OK, Mom. Planes make that noise all the time.”

Can I just fly with the 171st for the rest of my life?

This article appears in the January 2013 issue of Pittsburgh Magazine.
Categories: From the Magazine, Hot Reads, PittGirl