Rick Sebak reveals the Fallingwater architect’s schemes for downtown — and digs directed at the Steel City. 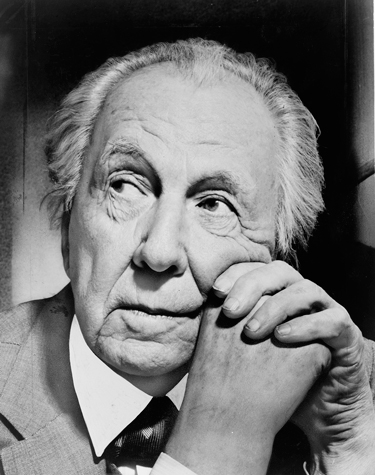 The great Frank Lloyd Wright was not always kind when he came to Pittsburgh. During a visit in June 1935, the 68-year-old architect declined to suggest changes to the city, saying, “It would be cheaper to abandon it and build a real one. This is a disappearing city: nothing comes out of it. The ancients would have swooned at the mere mention of the money it cost to build this jumble of buildings.”

While touring Oakland, he especially was disdainful of the relatively new Cathedral of Learning. “If this is the best learning can do, let’s get unlearned,” he told the Pittsburgh Sun-Telegraph newspaper. “That’s the most stupendous ‘keep-off-the-grass’ sign I’ve ever seen.” He was unimpressed by the Parthenon-ish Mellon Institute. “That’s what happens when men get rich and bring Greece to Pittsburgh … There’s nothing worse than the museums and universities they give us, and the Cathedral of Learning is the most outrageous instance of the fruits of the capitalistic system.”

His hosts also took him to see Chatham Village, the innovative housing experiment on Mount Washington. He wasn’t impressed. “It’s a great way to sell bricks. Those are mighty nice bricks I see.”

The paper didn’t mention that Wright was in the area to have another look at a site in Fayette County. Department-store magnate Edgar J. Kaufmann had asked the master to design and build a new weekend house along Bear Run.

In his fascinating book “Fallingwater Rising,” University of Pittsburgh professor Franklin Toker notes that Wright visited frequently to oversee the completion of plans and the beginning of construction on Fallingwater — one of Wright’s most iconic creations.

On those visits, Wright also was creating plans for a modern office for Kaufmann on the 10th floor of his department store, downtown. The cedar plywood office wouldn’t be finished until 1938, by which time the Kaufmanns were enjoying the magnificent building they had commissioned in Fayette County — and the house over the waterfall was earning Wright the superstar fame, admiration and respect he always had expected.

Kaufmann and Wright kept in touch. When the city was planning to redo the Golden Triangle in the late 1940s as the centerpiece of the first Pittsburgh Renaissance, Kaufmann had Wright create two major proposals (the architect referred to them as Scheme 1 and Scheme 2) for what might be done with the land at the Point. Scheme 1 called for a round, 13-level building approximately where Gateway Center later would be built. Scheme 2 was simpler, with a tall tower that would anchor two very modern cable-stayed bridges.

These schemes were fanciful and would have been extremely expensive to build. “These plans may be way ahead of their time,” Wright said. “But some day, they will be discovered again and put to work. I have designed a fairyland — but scientific in bone, fiber and flesh.” His vision for a fountain at the tip of Point State Park was one element that survived.

Wright was in town on May 4, 1949, to present his schemes and to speak to a meeting of the Carnegie Tech Students Architectural Group. By then in his 80s, he talked again with the Sun-Telegraph and couldn’t help himself from continuing to lambaste the city and the industrialists who helped to shape it: “Pittsburgh is interesting, you might say, but so is a collision between a truck, a school bus and five cars. The boys who made their money here ran away and left you to live in this pile of scrap.”

This article appears in the April 2015 issue of Pittsburgh Magazine.
Categories: Rick Sebak