Whether they’re something borrowed or something new, these veils are sure to impress.

Veils can be an important accessory or a valuable memento on a bride’s wedding day. They come in all shapes and sizes and serve very different purposes for each bride. While one bride may look for a veil to add that extra wow factor, another may just want a simple veil that enhances the beauty of her dress. We asked four brides from our Real Pittsburgh Couples why they chose their veil.

Simplicity
​When Karin Wong was planning her wedding to Michael Hurey, she knew she wanted something special for the big day on Aug. 26. When she went to Clarissa’s Boutique in South Side, she had a general idea of what she was looking for in a veil: a simple style to complement the detail of her dress. “In my head I was pretty confident that I wanted a cathedral style veil,” she says. “Plus it also went along with the [grandeur of the] venue I was getting married in — Carnegie Museum.”

Sisterly Love
To some brides, a veil is just an added frill. However, when Cari Glaser married Brennan Thrower on May 13, her veil was much more than just an accessory. Cari and her twin sister Emily became engaged within a month of each other and wanted to be able to take part in one another’s special days. Emily was married on New Year’s Eve five months before Cari’s wedding with a beautiful veil from The Winner in Sharon, Pa. After her wedding, Emily passed on her veil to Cari as her “something borrowed” for the big day.

“I loved that we had something so classic and beautiful to share on our wedding days, and even though our dresses were so different the veil worked for both of them,” says Cari. 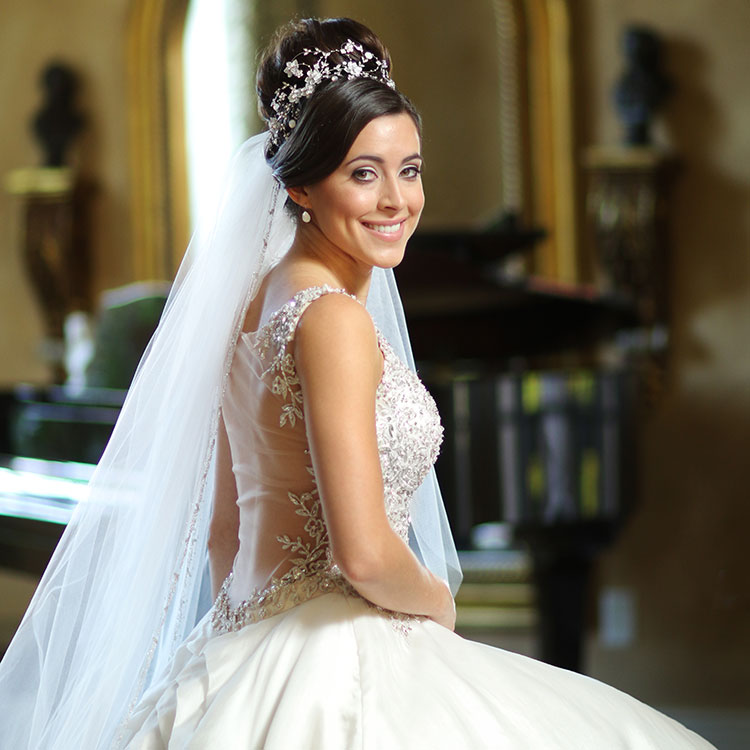 Tradition
Jessica Seibert loved tradition long before she knew she was going to marry Tom Morris on Aug. 6 in St. Paul Cathedral. So when it came time to pick out a veil, she already had some criteria: She wanted it to be cathedral length with a blusher. After shopping at Anne Gregory for the Bride, Jessica decided on a hand-sewn ivory veil with crystal that she describes as “traditional,” “soft” and “romantic.”

“I knew it was the perfect veil when I tried it on and the crystals perfectly accented my headpiece and dress but did not overpower anything,” says Jessica.

Something Borrowed
When Rachele Palmieri and Jon Wilen married on May 29, Rachele wore a beautiful circle veil with a raw edge to complement the intricacies of her dress. The simplicity of the veil went well with the lace and long train of Rachele’s gown, but there was another reason for this bride’s choice. It also acted as her “something borrowed” given to her by her soon-to-be sister-in-law who had married Jon’s brother a year and half earlier.

Besides a beautiful addition to her wedding day ensemble, the veil was a great reminder of the bond Rachele was entering into not just with her future husband but also with her future family. “I loved the symbolism of my sister-in-law and I sharing this precious piece of our weddings,” she says.