When a couple’s alma mater is close to their hearts, showing college pride on their big day makes the event even more special. 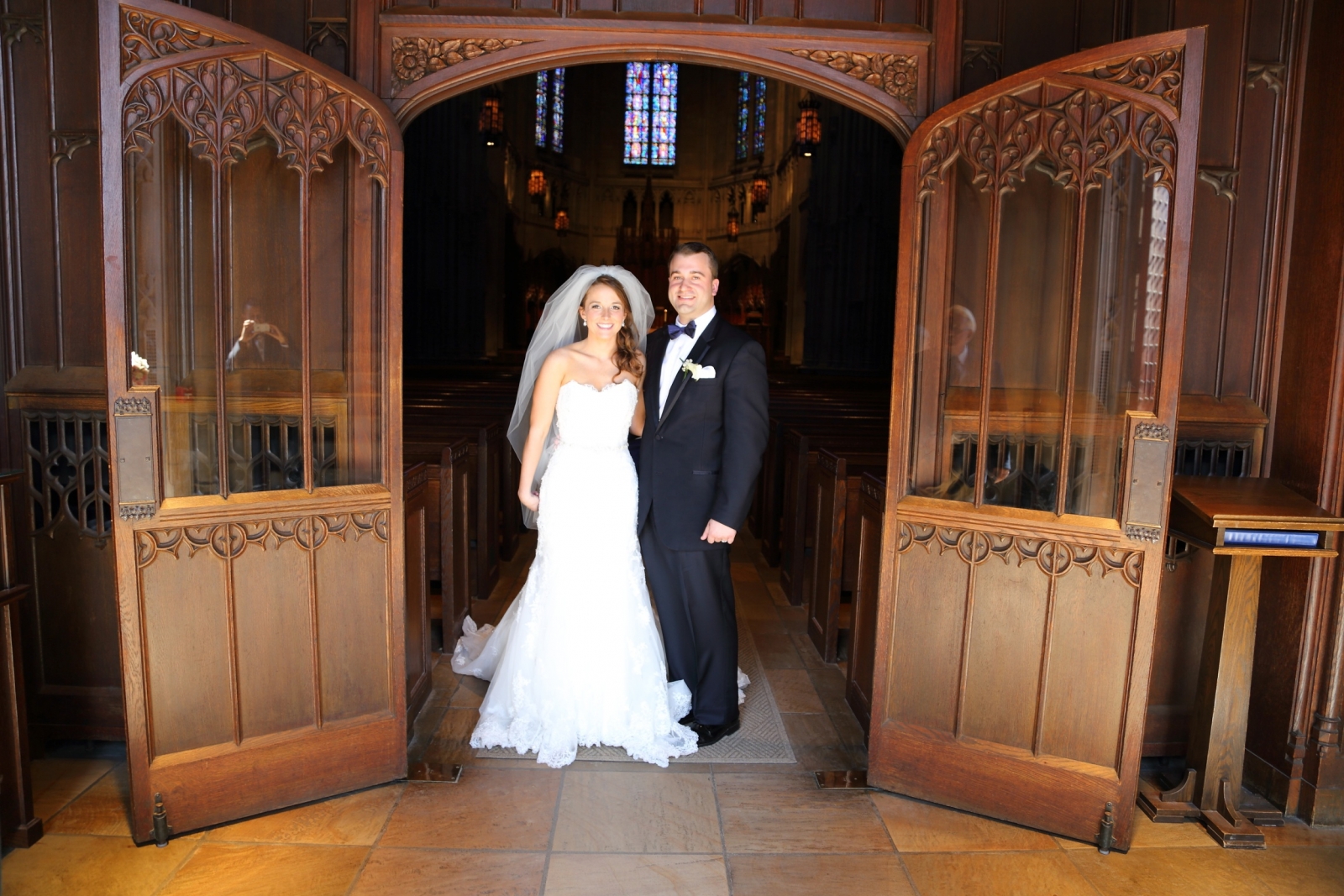 University of Pittsburgh sports fan Andrew Chikes proposed to Ashley Sosso with an engagement scavenger hunt across the Pitt campus. The adventure culminated on the steps of Heinz Memorial Chapel, where Andrew knew Ashley wanted to get married because the couple had met at Pitt. On April 12, 2014, the couple did just that. 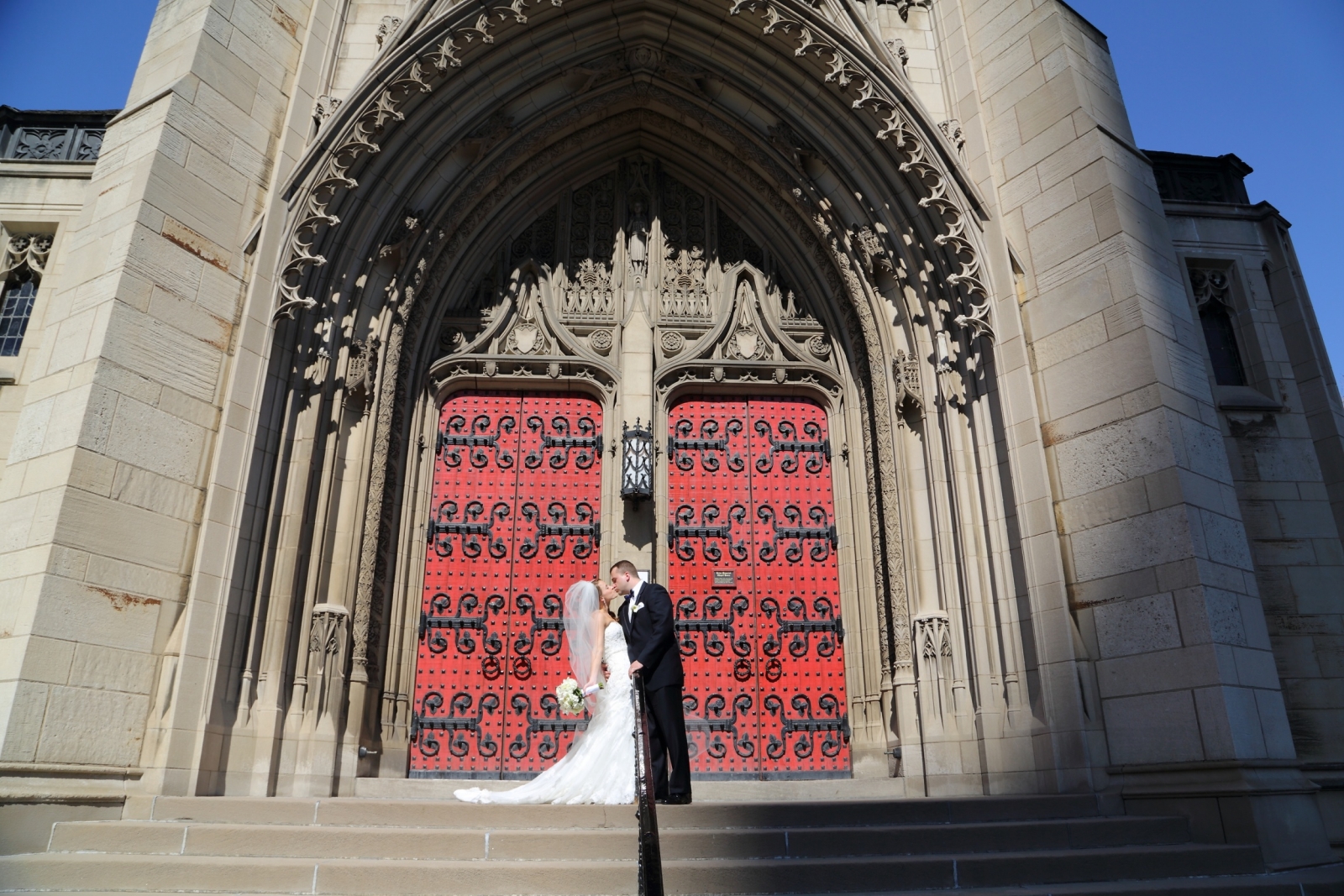 Ashley transferred to Pitt after her freshman year as a marketing and finance major in 2005 and Andrew began studying history and journalism at Pitt in 2004. The pair attended the University of Pittsburgh School of Law after graduating in 2008.

After they tied the knot at the heart of Pitt’s campus, the couple headed to the Duquesne University Power Center for their reception. They chose the venue to show off its view of the city to their guests.

“I think since we met [in Pittsburgh], it’s such a huge part of who we are. It’s a big part of our lives, so we wanted to share that with them,” Ashley says.

At the reception, the couple and their bridal party imitated the Pitt basketball team’s entrance onto the court. The DJ played the team’s music and video montage and then introduced each bridal party member, leading up to the bride and groom as they ran into the reception venue. Andrew wrote a description for the entire group, including where each bridesmaid and groomsman went to school and a fun fact about their relationship to the couple, mirroring the announcements of Pitt players’ height and major as they run on the court at the Petersen Events Center.

“We kind of took the university theme to the extreme, but tastefully,” Ashley says. 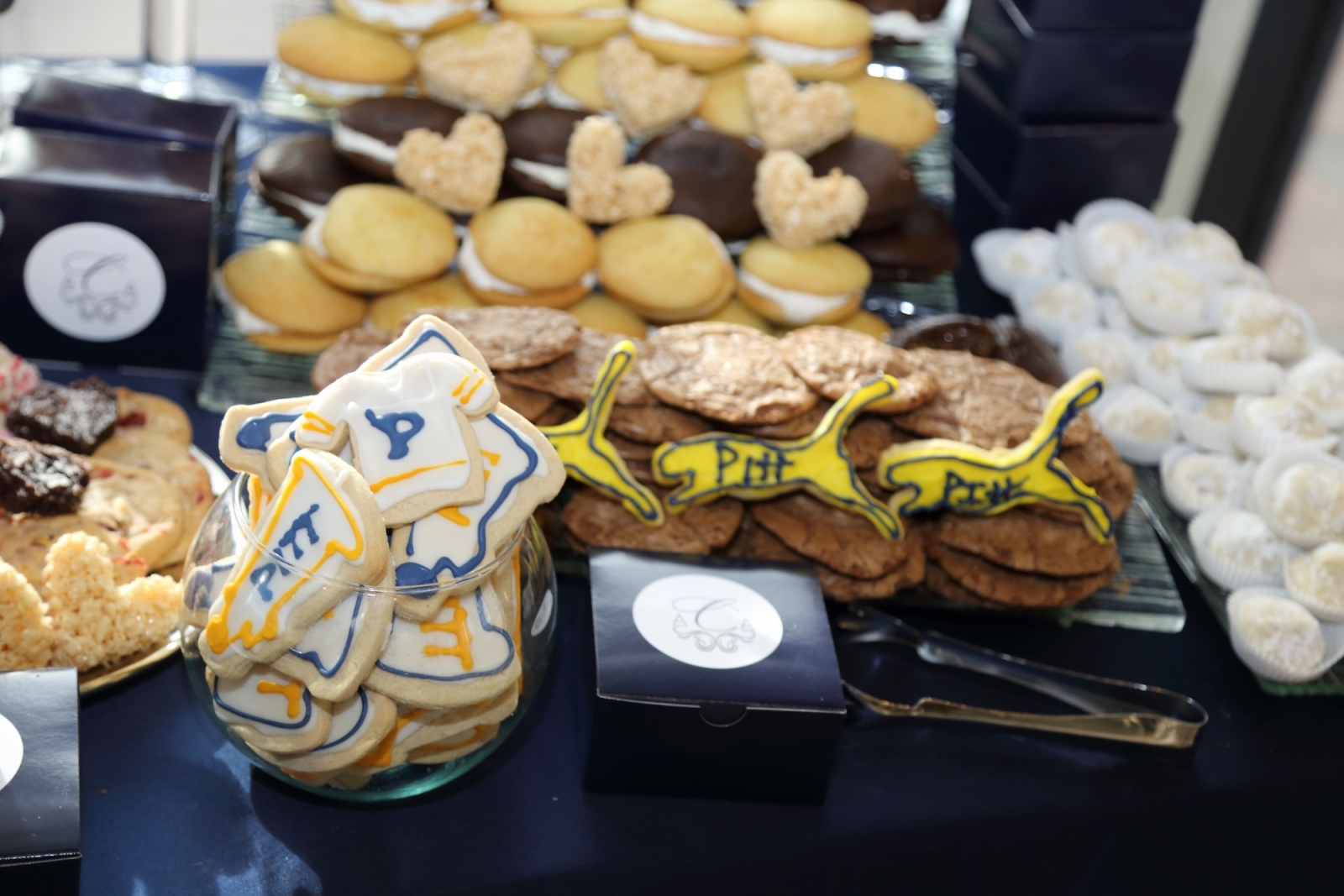 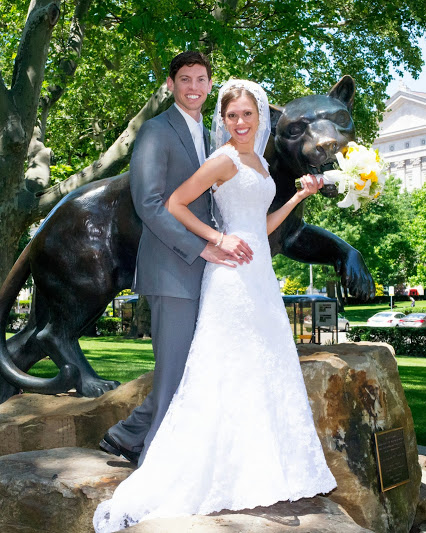 Jessica Smith and Nick Parton grew up about 20 minutes away from each other in eastern Pennsylvania, but attending the University of Pittsburgh across the state ended up bringing them even closer.

“We actually met when we were younger, but it was at Pitt that we became friends … We were kind of continually crossing paths,” Jessica says. 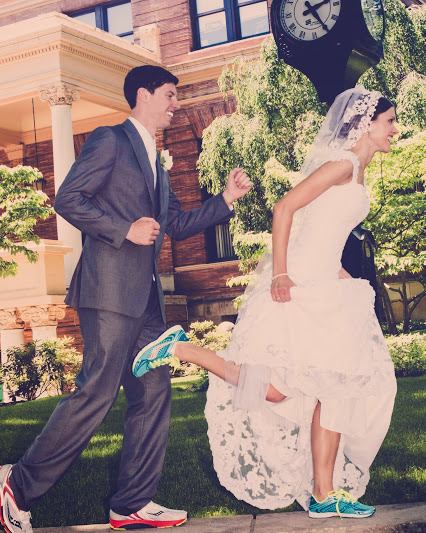 As undergraduates, Jessica studied neuroscience while Nick majored in exercise science. They both continued on to the university’s physical therapy doctorate program and graduated in 2011.

The couple now resides in Colorado Springs, Colo., but planned a destination wedding at the University of Pittsburgh to celebrate their shared alma mater.

During their wedding weekend, the couple held a pre-wedding 5K through Schenley Park and sang Neil Diamond’s “Sweet Caroline” at a welcome party the night before their nuptials to acquaint out-of-town guests with the University of Pittsburgh. The song represents Pitt fans’ tradition of wrapping their arms around each other after the third quarter of a football game and singing along to “Sweet Caroline,” inserting phrases such as “Let’s go Pitt!” during instrumental breaks. 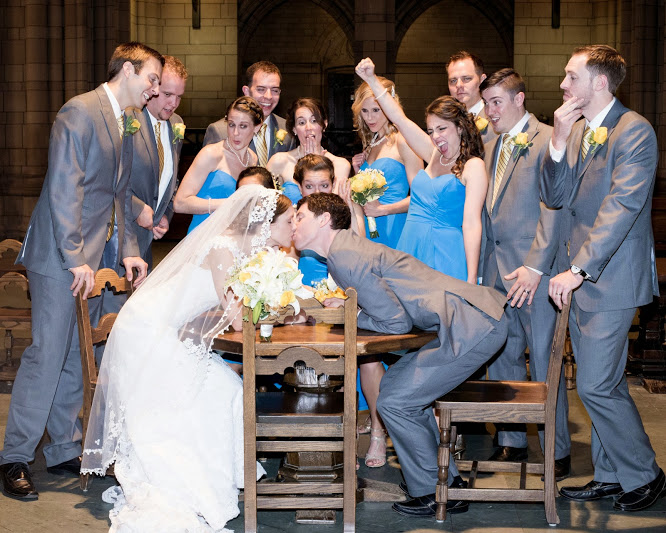 “We really wanted to share this awesome place with our friends and family … People who weren’t from [Pittsburgh] really enjoyed it. Everyone was really excited to see the area,” Jessica says.

Jessica and Nick hired local vendors that held special meaning for them for their cake and flowers. Jessica used to stop at Prantl’s Bakery in Shadyside for its famous burnt almond torte, and Nick used to buy flowers for her at Gidas Flowers in Oakland.

“The little things that are meaningful to you make the day that much more special,” Jessica says. 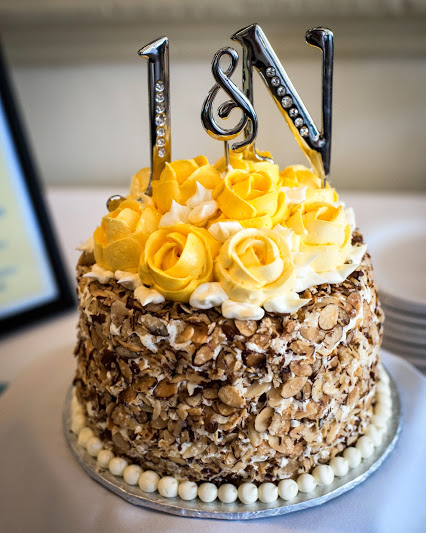 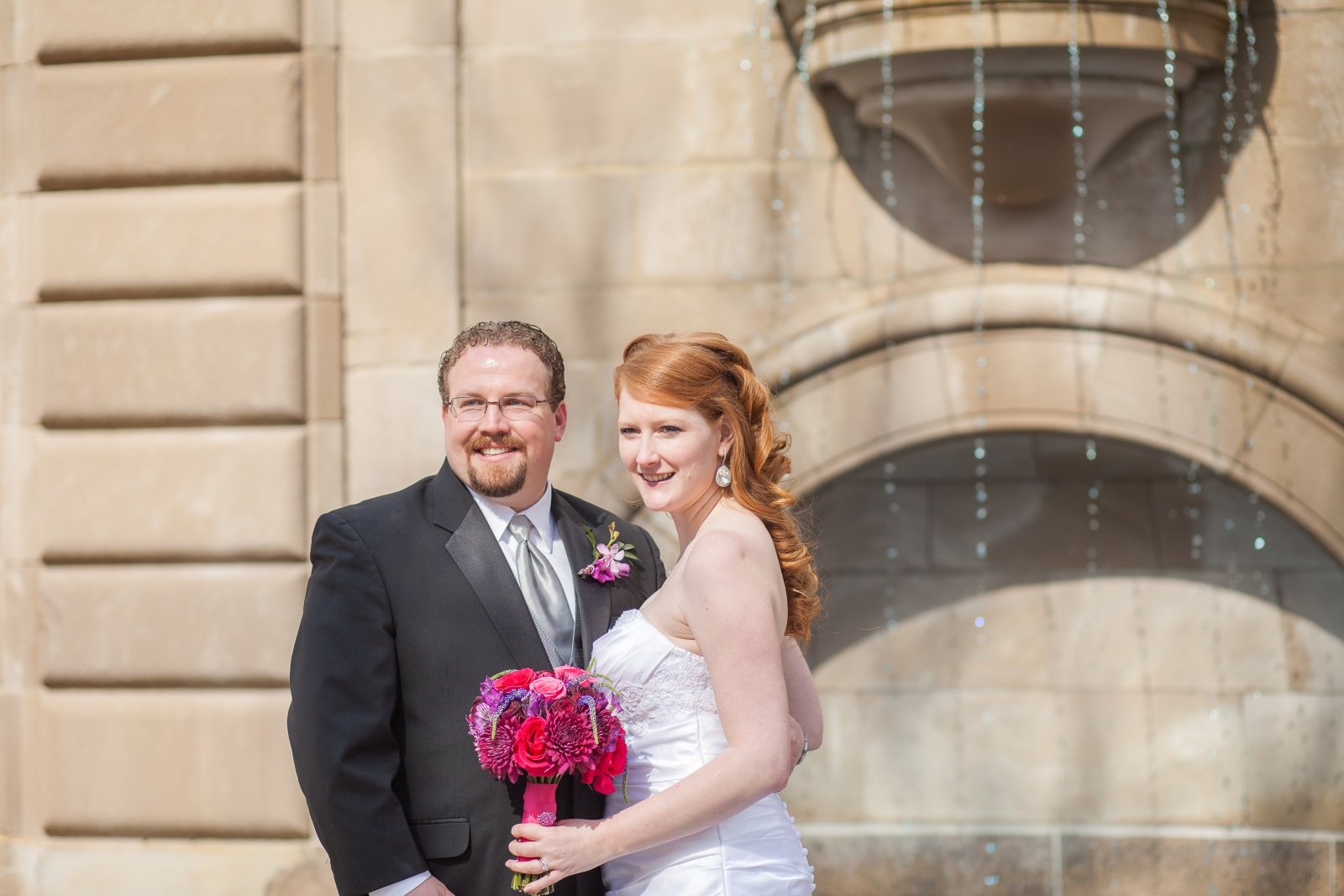 Julia Jankovic and Brian Dahm included subtle references to their love for the University of Pittsburgh throughout their wedding day, although they didn’t opt to use Pitt’s colors or a sports theme.

“To have Pitt incorporated [into the event], it doesn’t necessarily have to be a blue- and- gold wedding,” she says.

At Pitt, Julia majored in Spanish and linguistics before earning her masters degree in library & information science in 2009. Brian studied accounting and graduated in 2007. 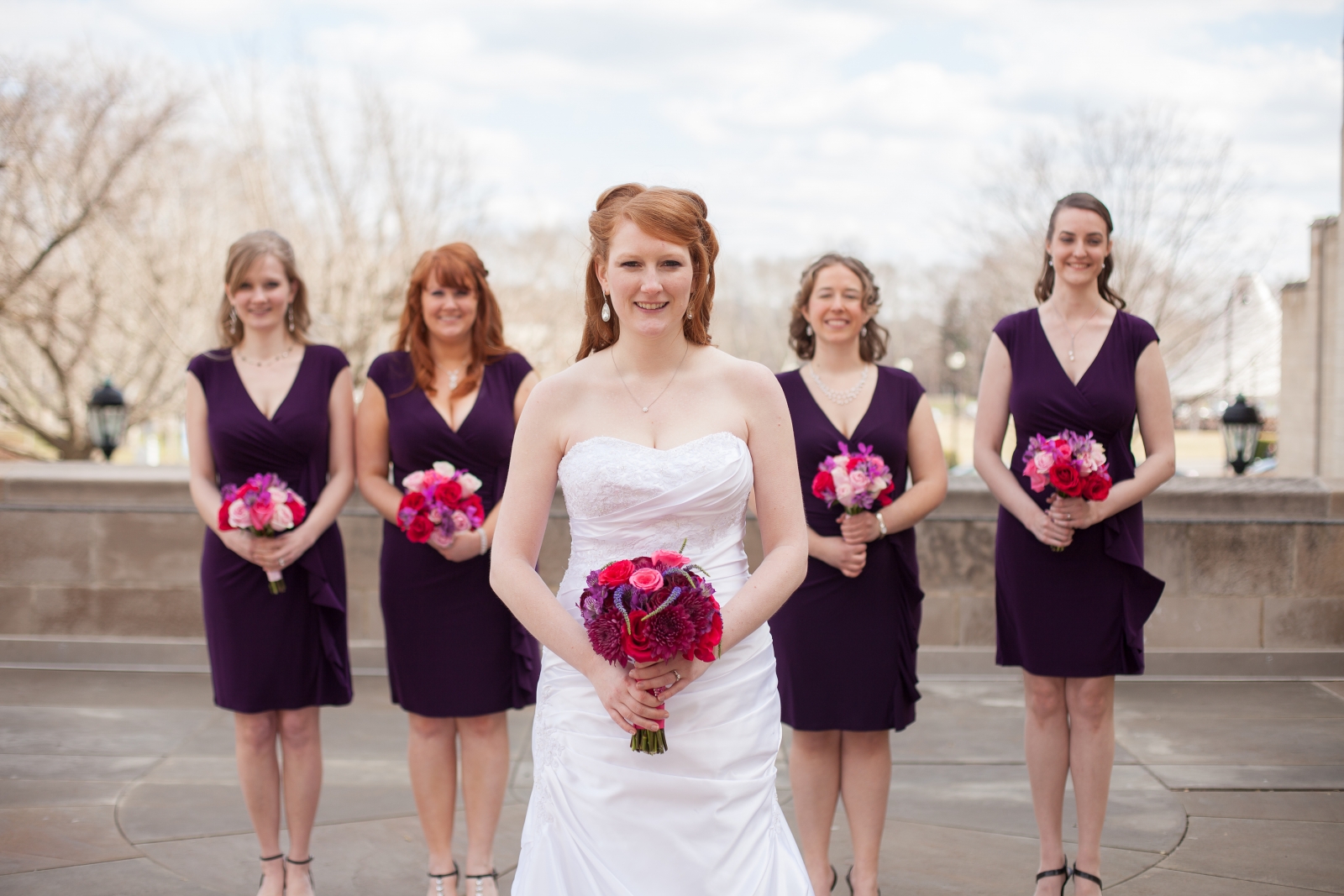 Both were members of the University of Pittsburgh Varsity Marching Band but met only in passing. They reconnected through their involvement in the Pitt Band Alumni Council’s celebration of the marching band’s 100-year anniversary in 2011, and eventually Brian asked Julia out on a date.

They held their ceremony in Greenfield, not far from Pitt’s Oakland campus, and had a portrait session at the University of Pittsburgh’s Cathedral of Learning. 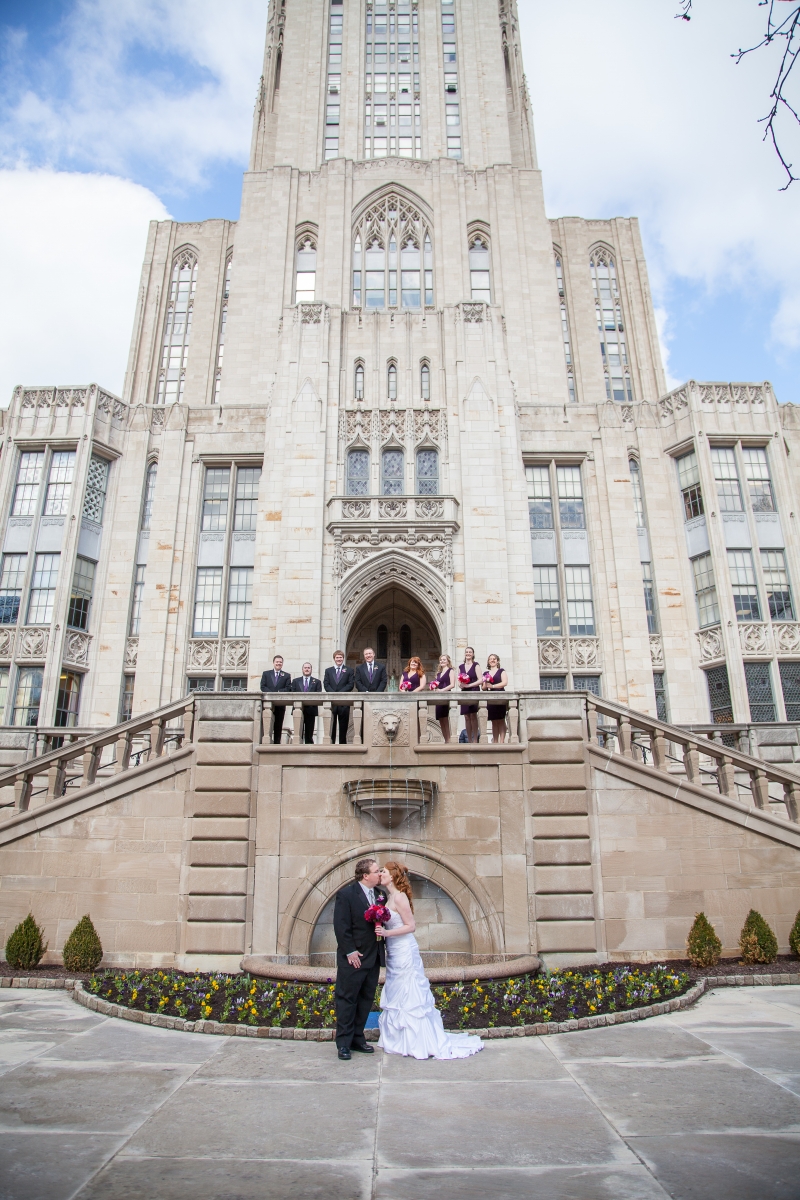 “We both just really wanted to be in places that were familiar and meaningful to us … We really liked the idea of keeping everything local,” Julia says.

Julia and Brian both work on campus — she’s the University of Pittsburgh Health Sciences Library Technology Services librarian and he’s employed  in finance at UPMC — so the university is part of their everyday lives. Julia says she enjoys driving past the Cathedral of Learning and remembering their wedding day. 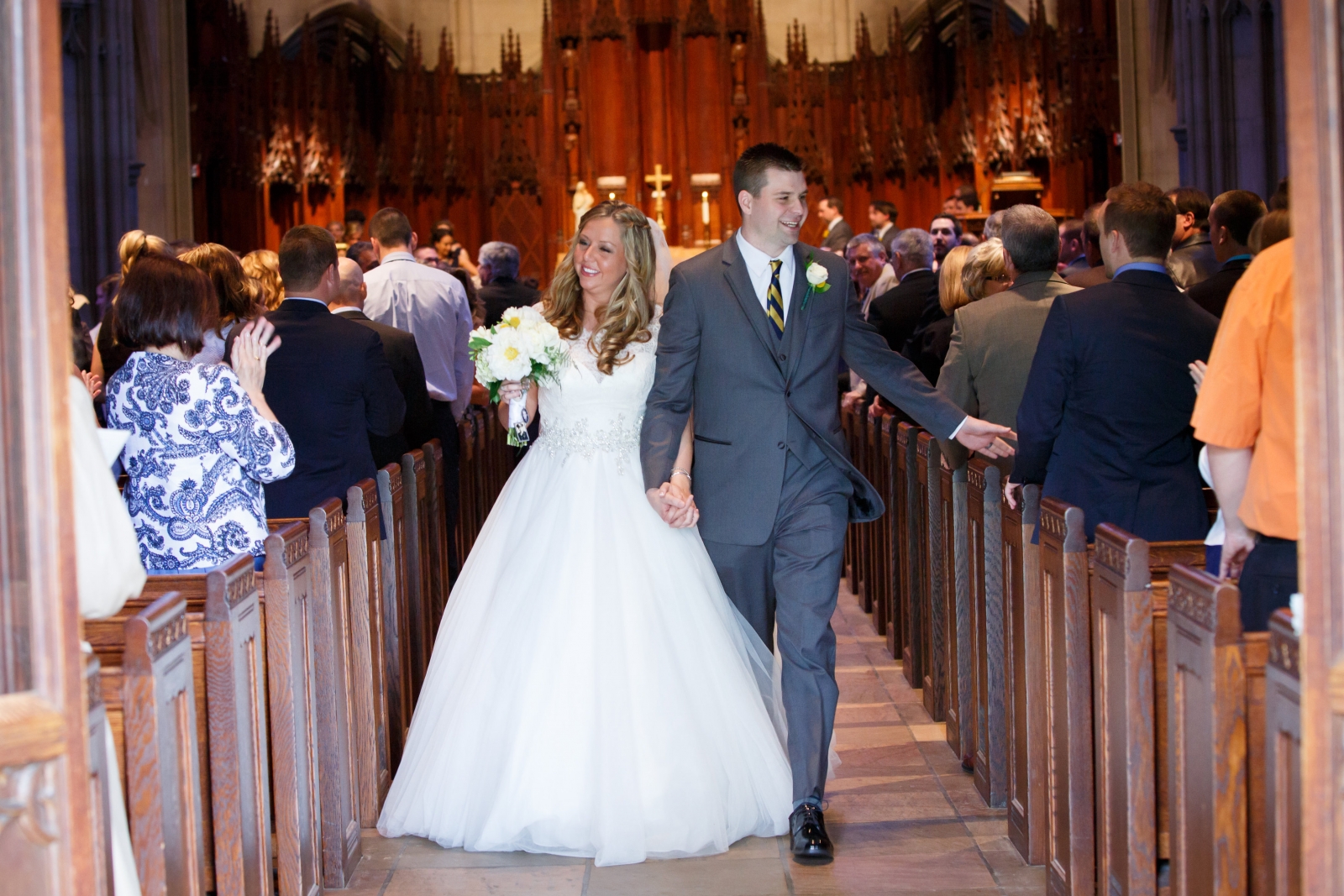 photos by weddings by alisa

Backyard Brawl rivals Laura Barnard and John DeSimone tied the knot on the University of Pittsburgh campus — even though Laura graduated from West Virginia University and John is an alumnus of Pitt — with a blue-and-gold affair. They met while working together in the human resources department at Education Management Corp.

The Mountaineers and the Panthers share an intense football rivalry, but luckily for Laura and John, they share blue and gold as team colors. 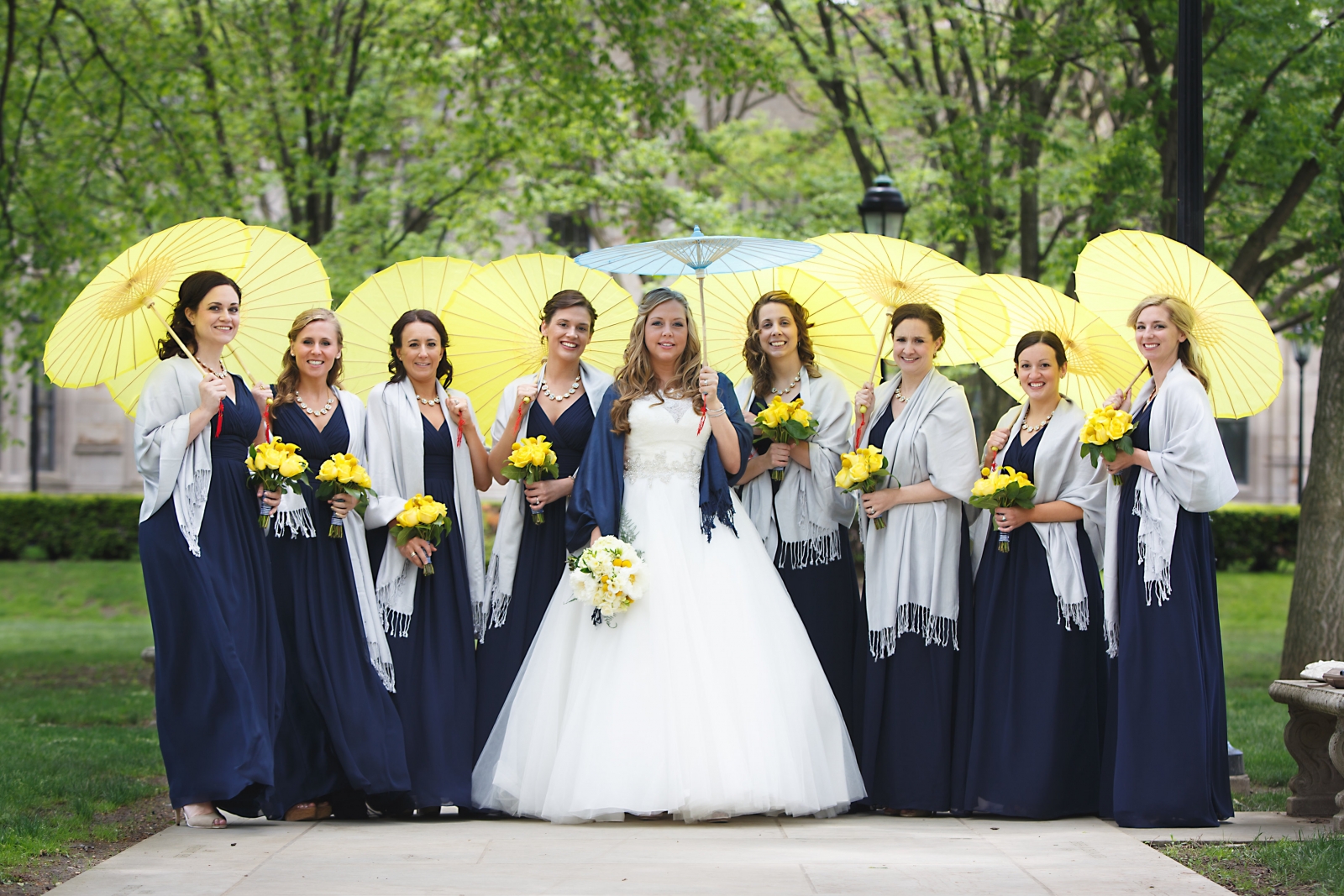 “It [depends on] who you ask which team our [wedding] colors stood for,” Laura says.

John designed save-the-dates reminders that resembled a football-game ticket featuring a clash between Pitt and WVU. The couple included blue-and-gold features throughout the wedding and displayed football helmets representing their respective teams on each side of the sweetheart table at their reception. 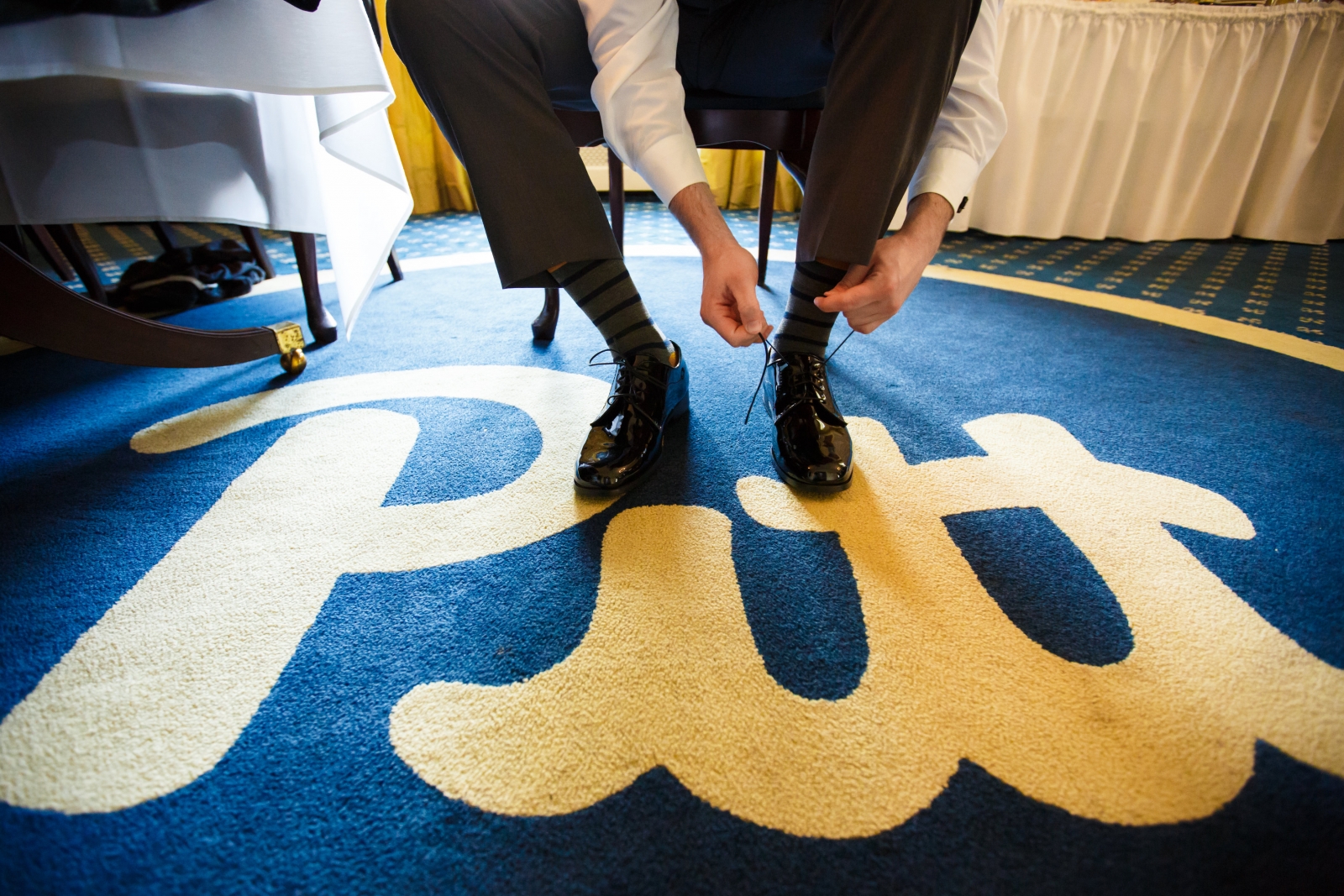 Many of Laura’s family members attended WVU and are passionate fans of its football team.She says her father reluctantly gave his blessing to add a Pitt graduate to the family, and it took a lot of convincing to hold the event on Pitt’s campus.

“The rivalry hasn’t gone away since marriage,” John admits.

Laura and John say that featuring their college rivalry in their wedding was a fun theme for the day, and the schools’ shared colors made compromise easy.

“We pick on each other, but it’s a commonality that we are passion about our schools … If you have a rivalry wedding like ours, stay passionate — but don’t fight too much about the rivalry,” Laura says. 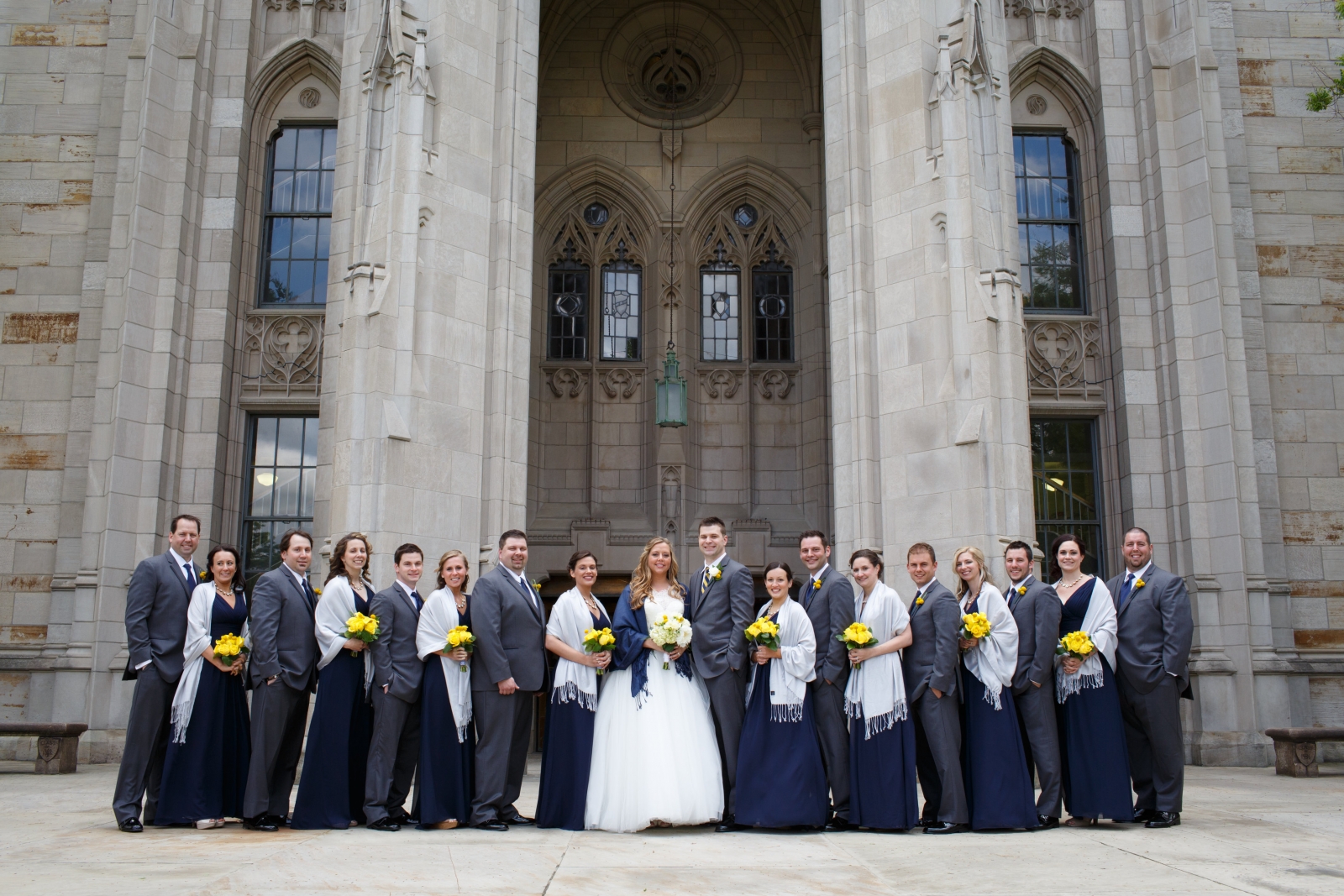