If you need to go to a bar and find something a little more impressive than a Journey cover band, go for 28 North, Joy Ike, Phat Man Dee or The Substitutions. 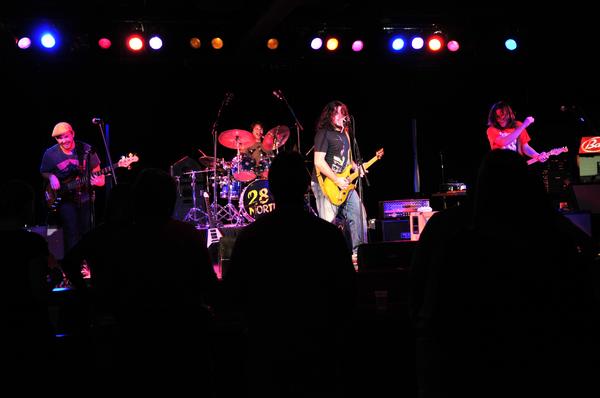 28 North performs at the Pepsi-Cola Roadhouse earlier this year.

For an alleged nightlife writer, I’m a bit reluctant when it comes to the local music scene.

I’m all for enterprising folks grabbing some instruments and practicing in the garage until it’s time to take the show to our assorted dive bars and hipster joints, but I find that these collections of local performers aren’t usually all that entertaining. It’s like poetry: It’s a great idea to write poetry to express your creative urges and get your thoughts out, but you don’t need to send it to The New Yorker. It’s for you. And for many struggling bands and performers … well, it’s for them. It’s not for public consumption.

But sometimes, you need to go to a bar and find something a little more impressive than a Journey cover band. Every town, big or small, has a few gems that really have something unique to offer. The key is performing and writing in such a way (and in a genre) that generally appeals to all crowds; it’s a good bet that not everyone you’re out for drinks with is into the same music as you, and it’d be great to find a pub that features music that makes everyone happy.

It’s challenging, and you’ll hear a dozen ’Burgh bands that don’t do anything for you before finding a diamond in the rough. In order to save you some of that trouble, I’ve come up with a quartet of my favorites that should please your whole posse on any given night.

I was introduced to 28 North by my old roommate Laura, who’s the cousin of perennially-grinning frontman Mike Lindner. She raved about them, and I finally made it to a show at Thunderbird Cafe in Lawrenceville one cool winter night. I was blown away by the first song, and it only got better. 28 North’s brand of Southern-flavored, bluesy rock and roll hearkens back to The Band and The Who while still sounding like it belongs in the 21st century. When the band covers “Baba O’Riley,” you get the impression that The Who themselves can’t play it this well anymore. Their music is loud, it’s energized and it’s a hell of a lot of fun. And the four members are, to a man, intensely impressive musicians, who clearly have been honing their craft for years. 28 North started drawing bigger crowds locally with some appearances on WDVE and at local festivals (not to mention being named 2010 Best Band by PM), and they’ve started touring nationally, so you have to keep your eyes peeled to catch their local dates. The next booked date locally is June 30 at the Greensburg Summersounds fest. (Info: myspace.com/28norththeband)

One problem with mining for local talent is the repetition rampant among amateur songsmiths. Just about every assemblage of night-job musicians you find will either be power-chord spitting punk/metal or a hipster cacophony of interesting (but unlistenable) compositions. Joy Ike, then, is a breath of fresh air. She’s an incredibly gifted songwriter, and those skills are only matched by her acumen as a performer; she knows how to weave a beautiful, catchy pop song and then assemble a band (or just a keyboard) so that you’ll never look away. Her music is undeniably pop, but it’s pop in the grand tradition—wandering through soul, blues and R&B effortlessly and intelligently—combining sounds and elements perfectly in a pleasing sonic cocktail. She’s also one of Pittsburgh’s hardest-working talents, so she’s never too hard to find. She’s touring a bit this month, but will be at Commonplace Coffeehouse (5827 Forbes Ave., Squirrel Hill) on March 29 and on the Carnegie Mellon University campus on March 30. (Info: joyike.com)

Older Pittsburghers will understand what it means to say that Phat Man Dee is one of the last bastions of the torch music tradition. The hippies among us may understand her a bit better when they learn that she’s a staple of the bizarre Burning Man festival. Those who fall into neither category will have to imagine slow, transportative vocal jazz. She is something of a one-woman cabaret, performing in a way that wraps all of American culture into one package, from ragtime through Ella Fitzgerald through Black Sabbath. (I’ve seen her cover both those artists, by the way.) She’s not just unique to Pittsburgh, she’s unique to the universe. You simply have to see her. Go to Howler’s in Bloomfield on Saturday night, or try the Backstage Bar downtown on March 16. (Info: phatmandee.com)

The Substitutions: Fun, Rowdy Rock and Roll That Sounds Like Nothing Else

It was firmly in the middle of one of those ho-hum nights of unremarkable local music that I discovered The Substitutions. In the middle of a too-long bill at Howler’s Coyote Cafe, this trio stormed the stage and shocked me: They were playing music that didn’t sound like anything else. I was floored. A local band with an entirely original sound? Amazing! They’re clearly from western PA—the classic rock of WDVE has made an imprint on these lads—but they also seem to have grown up on everything from punk to pop to old rare vinyl. It’s rock and roll at its most pure—fun, frantic and loud. Unlike the artists previously mentioned, The Substitutions don’t really have much of a following yet, so this is your chance to get on the next big thing before your friends do. (Info: myspace.com/ridewiththechange. Disclaimer: You’ll probably have to e-mail and otherwise harass them to get them to update their page with current tour dates. They won’t mind—they’re cool guys.)

This article appears in the March 2011 issue of After Dark.
Categories: After Dark