In the aftermath of a messy divorce that sent her fleeing back to Pittsburgh, the designer transformed a 140-year-old brick rowhouse in Sharpsburg into an eclectic home — and found herself in the process. 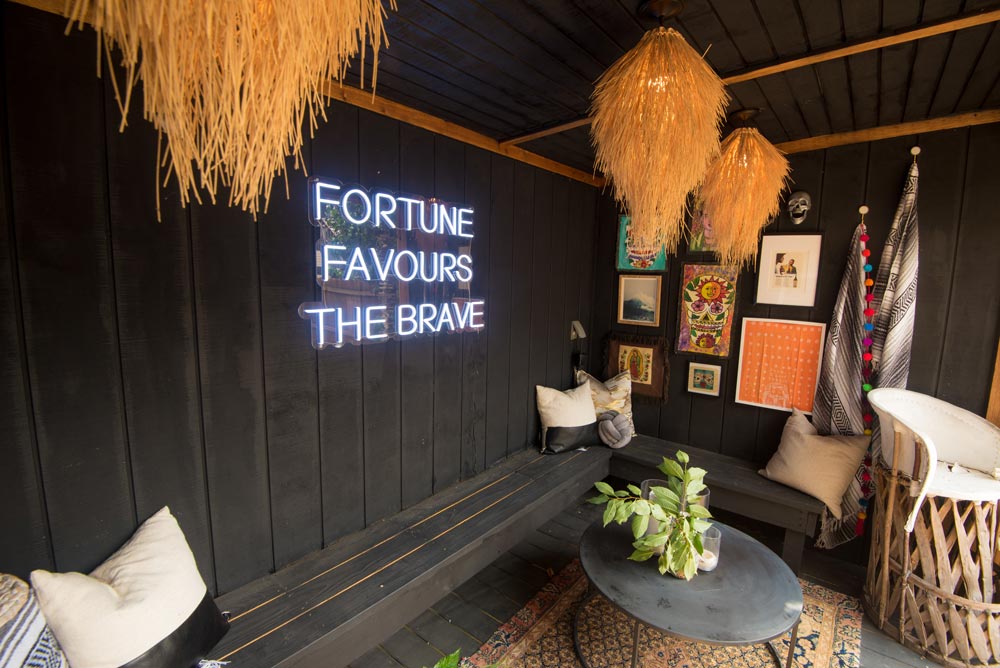 Kacie Cope’s 1880s-era rowhouse in Sharpsburg is adorned with a bold and whimsical collection of thrifted, repurposed and inherited decor. Many of her best finds came from Facebook Marketplace, estate sales and her own basement (which is how a tapered paintbrush found its way onto a floating shelf in her living room). Sacrosanct to the home, Cope says, is art. In Cope’s estimation, art shouldn’t just reflect who you are, but who you are in that very moment. 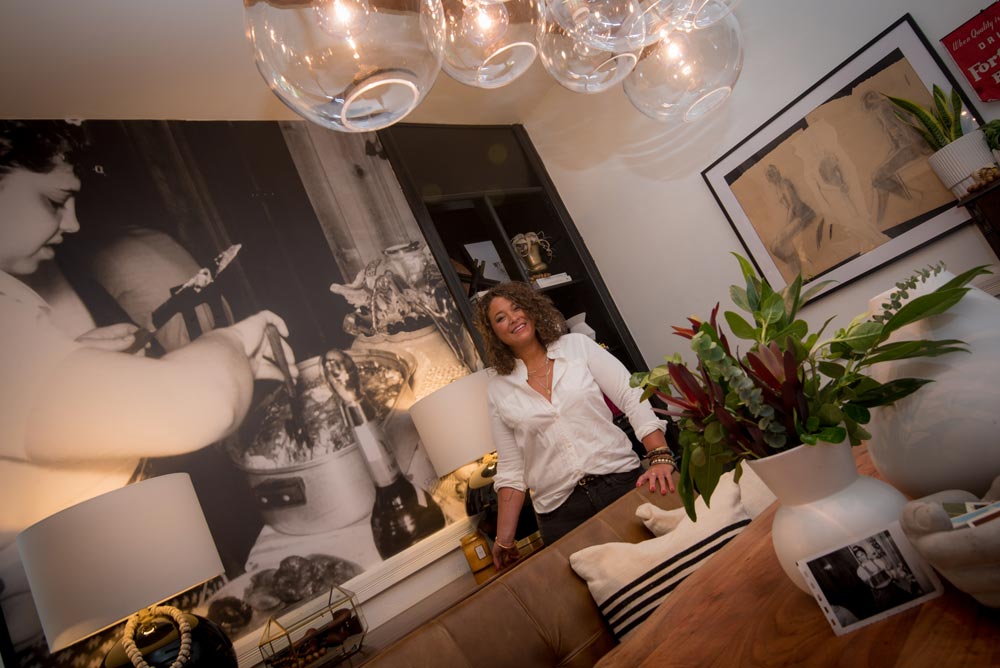 So when she spotted a black-and-white silhouette of a woman diving into a black abyss — right before quitting her decade-long nonprofit job to launch Kacie Cope Interiors — she decided she was absolutely meant to have it.

“I’ve been walking toward the end of the plank for so long,” she says.

Cope’s journey from teaching fourth graders through the Teach for America program to managing grants for the nonprofit to becoming a full-time designer has at times been a tumultuous one.  After graduating from the University of Pittsburgh in 2009 with a degree in communications, she joined Teach for America and moved to North Carolina. Within a few years, she transitioned to an administrative role, got married and purchased a fixer upper in the Charlotte suburbs. 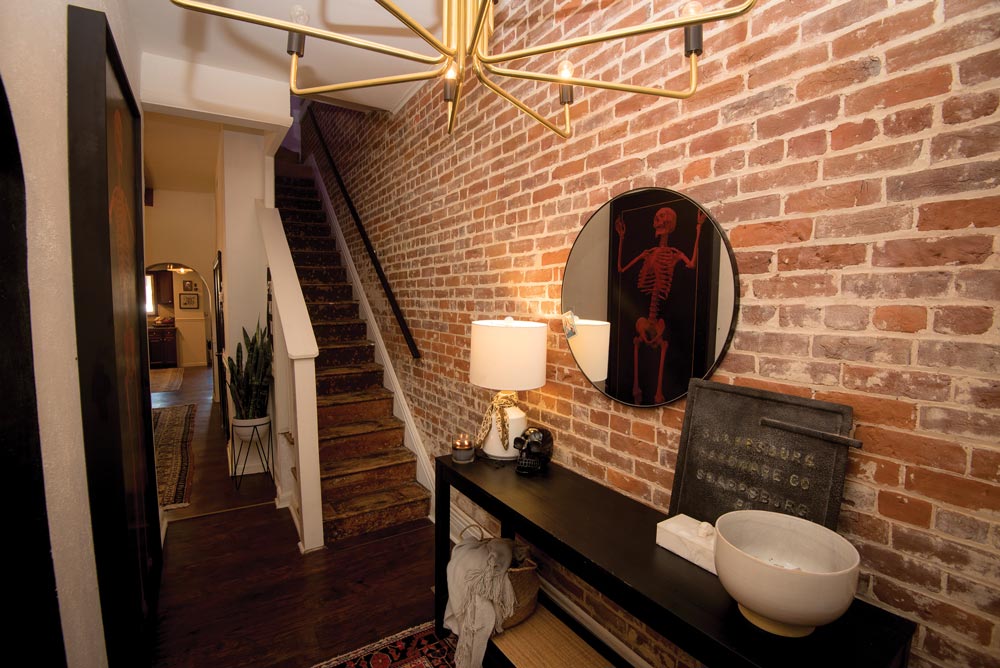 She dutifully documented the ensuing renovation on a blog, grabbing the attention of Charlotte-based designer Christina Britt Lewis, who loved her work and invited her to join her team as a part-time freelancer. That easy existence was shattered two years ago by a messy divorce that Cope says forced her to sell the North Carolina house, along with nearly everything in it, and flee to her parents’ home in Pittsburgh’s North Hills.

“I was wrecked,” she says. “I was struggling to brush my teeth some days.”

In her worst moments, she found hope remembering the joy and sense of control that came from remodeling the house in Charlotte. She vowed to do it all over again, this time on her own in Sharpsburg. 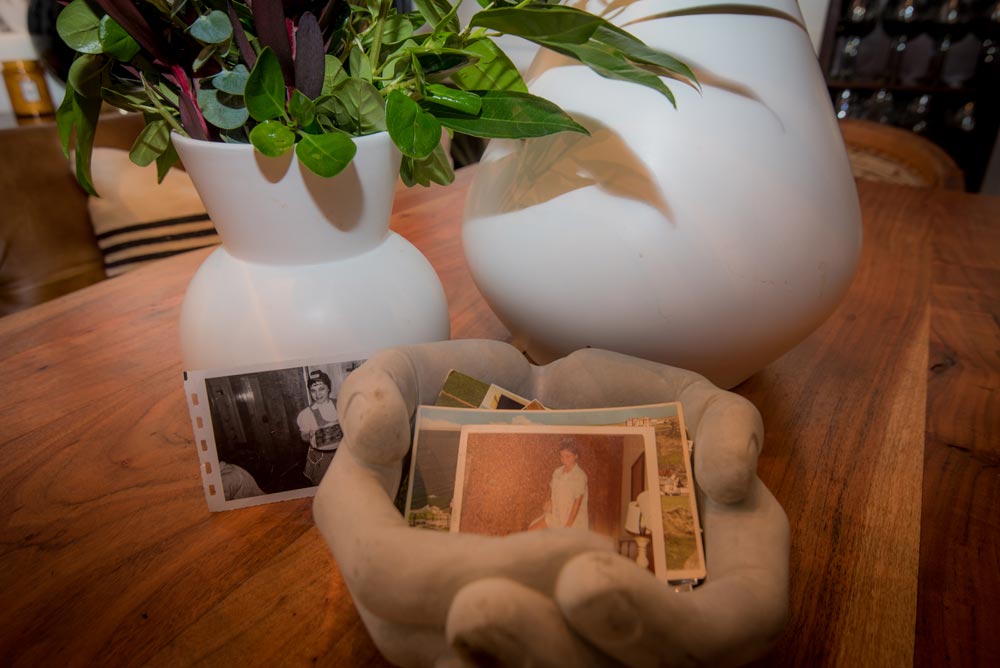 It was a nostalgic choice. Her extended family had settled in the borough a century earlier after immigrating from Italy. Her great-grandfather, known to all as Mr. Tony, sold pizza out of his basement on Friday nights for $1.25. Her beloved grandmother, Fortune, owned a produce market in the storefront now occupied by Big Shot Bob’s House of Wings.

Though Cope didn’t have the energy for a full-gut renovation, she longed for something unfinished enough to leave her mark. She found it with a 140-year-old brick rowhouse on the 1400 block of Main Street; immediately, she enlisted a structural engineer to ensure its integrity. The engineer took one look at the arched doorways and divided floor plan and assumed Cope wanted to tear down walls. 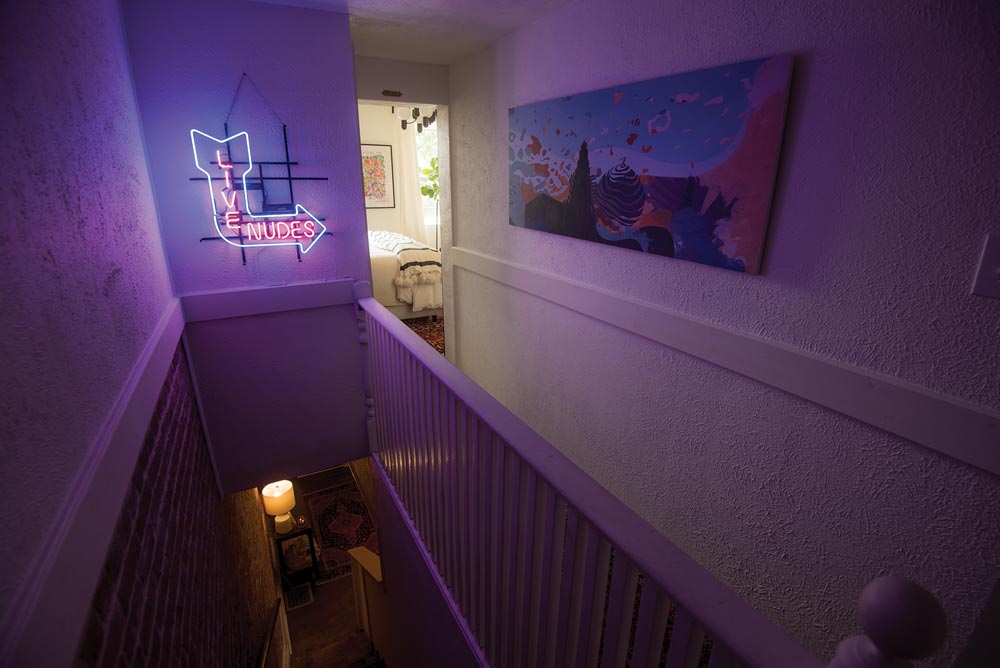 The home’s “cozy and weird” vibe spoke to her, and her hope was to find the sweet spot between honoring its history and making it her own. In the past 18 months, driven in part by quarantine boredom and aided by Scherling Contracting Group, she has done just that.

“I had nothing to do and a lot of pent-up creative energy,” she says.

Of course, she shared the entire adventure on Instagram, and just as before with her blog, people began reaching out for design advice. The account demonstrates Cope’s unique mix of fun, bold and historical decor. It’s no wonder the project got Cope, and Instagram, so excited. The house is utterly, unmistakably, a representation of her distinct style. 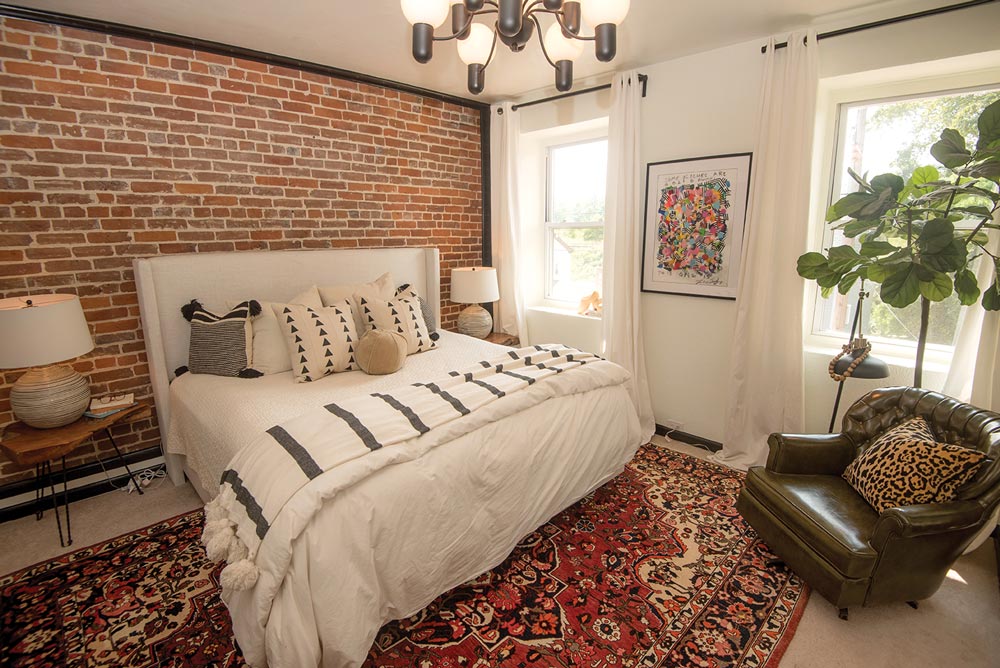 Those arched doorways that she so loved are now painted black to ensure they stand out against the white walls. Sharpsburg artifacts, including historical photographs and a coal door from the Sharpsburg Hardware Company, pop up in every room. Quirky estate-sale finds abound, such as a collection of old smoking pipes and a vintage hair dryer. Cope also has an expert knack for combining function with fashion.

“I love to use my functional stuff as decor,” she says. “We have a lot of really cool things that we keep behind closed doors.” 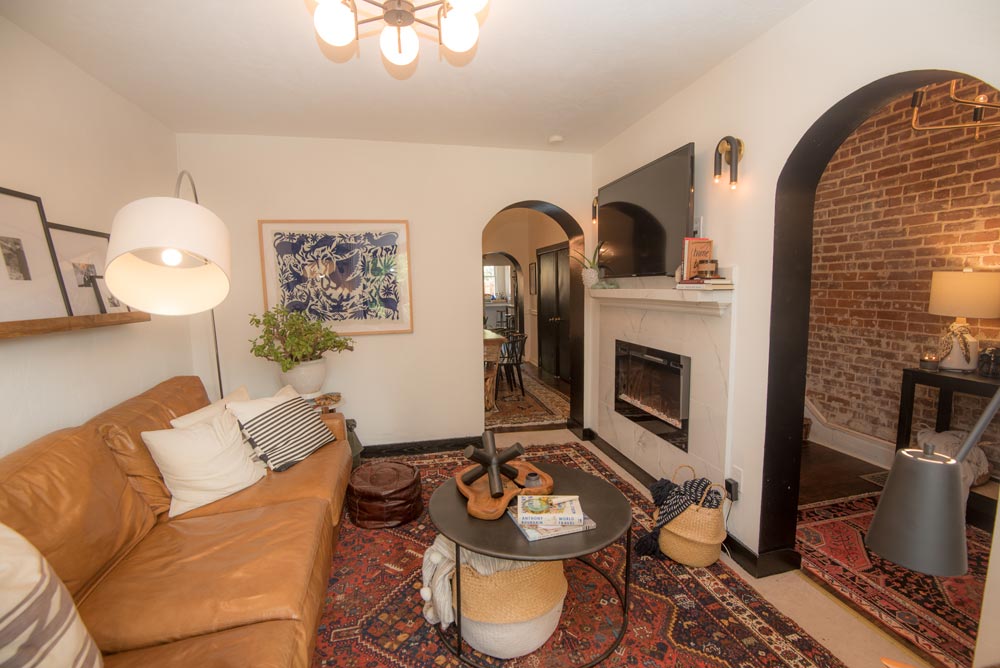 Printed scarves and wooden beads loop around lamp necks in the living room, leopard-print hightops sit on a shelf in her entryway and a well-loved skateboard rests in her Mexican cantina-inspired backyard. But it’s the art that really stands out, from the life-sized skeleton painting by Zach Brown (whose work Cope discovered at Zynka Gallery in Sharpsburg) to the framed, rooster-embroidered fabric. 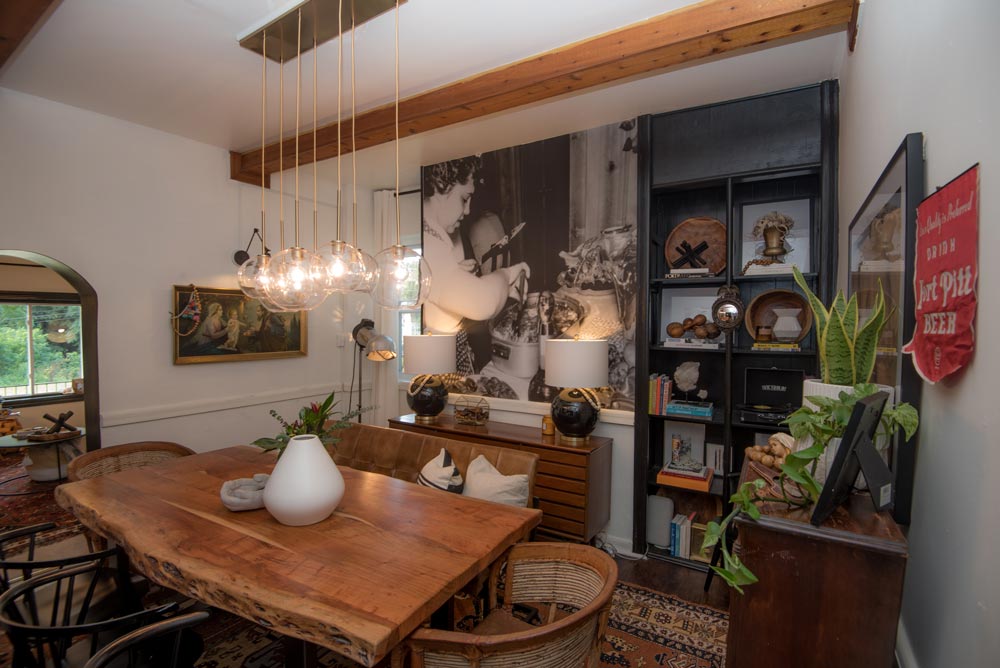 Not surprisingly, Cope’s favorite piece, located in the dining room, is a black-and-white, wall-to-wall mural of her grandmother cooking in an apron.

“Why the hell do you want to look at me?” Fortune asked her granddaughter when she saw it.

It’s not the only ode to the woman Cope spent her life admiring. She also has a plethora of Catholic paraphernalia she inherited when Fortune died last July, as well as a white neon sign in the backyard that reads “Fortune Favours the Brave.” 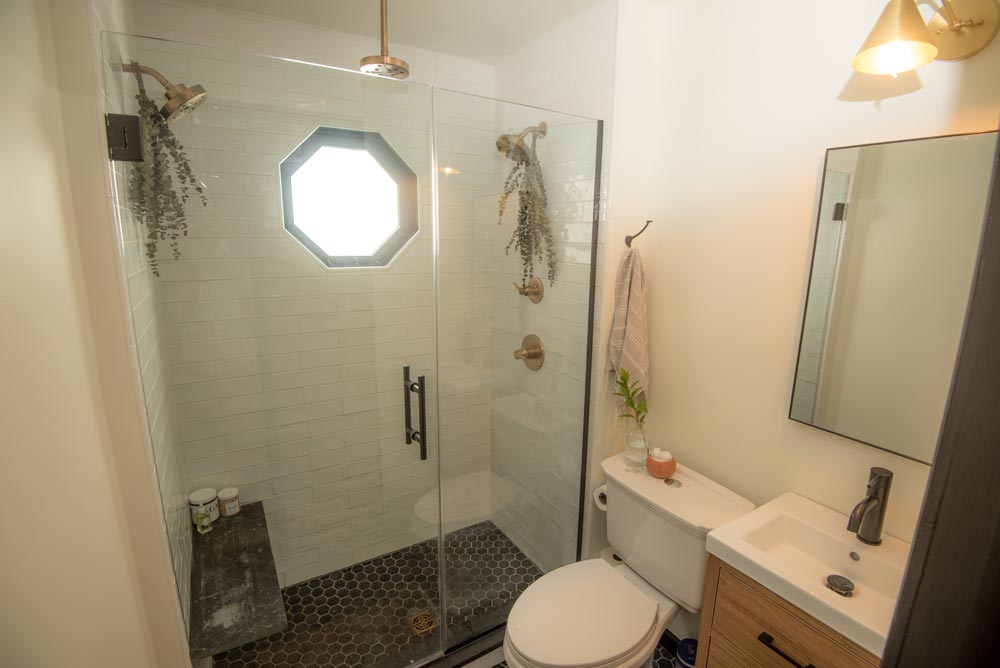 Considering her big career move, Cope is hoping that mantra proves to be true.  In addition to working with clients, Cope also teaches classes on — what else? — thrifting and decorating through Skill Pop, a company that offers affordable, expert-led online workshops. It’s fitting, because as much as Cope revels in designing for others, she takes just as much joy in teaching them to design themselves. 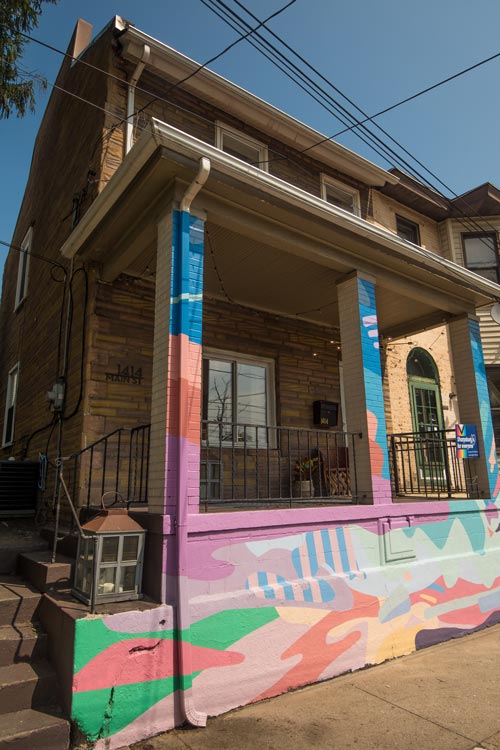 “It’s killer when people hire me, but there’s something so satisfying about doing it on your own,” she says. “It’s in our bones to create homes. It’s so satisfying when you can look even at a little corner and say, ‘I did that.’”

Cope knows. She lives it every day.

“This home saved me,” she says.

This article appears in the Oct. 2021 issue of Pittsburgh Magazine.
Categories: From the Magazine, HOME + Design

Why the "Mushroom House" is Rooted in Pittsburgh History

5 Local Antique Shops Worth a Visit