As Pittsburgh prepares to welcome delegates for the One Young World Summit, we focus on energetic and ever-busy OYW co-founder David Jones. 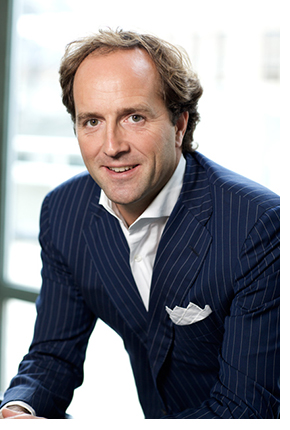 Advertising used to be about selling an image. Reality and truth didn’t matter. As fictional ’60s ad king Don Draper once smirked on “Mad Men”: “We can say anything we want.”

Not anymore, says real-life 21st-century advertising guru David Jones. Today, reality is what counts. Consumers demand that corporations and advertisers are honest and socially responsible. If they aren’t, a new generation of savvy customers, utilizing what Jones calls “the revolutionary tools of social media and digital technology,” will punish them.

Jones, a 46-year-old Englishman, is the head of French ad giant Havas, whose clients include companies like Sony and Volvo. He’s the youngest global CEO in the history of advertising, and his phenomenal career is based, in part, on his early championing of social media and digital technology as advertising tools.

As game-changers like Twitter alter the way consumers look at and communicate about corporations and their products, Jones says he asks his corporate clients, “What is your purpose beyond profit? How are you being socially responsible?” And he’s made sure that Havas — which has a local office — practices what it preaches: Three years ago, Jones upped the company’s own commitment to “purpose beyond profit” by co-founding One Young World, a nonprofit that brings together leaders of the Millennial Generation (18 to 30 years old) from around the world and gives them the chance to discuss, debate and work toward solutions for the most pressing global problems. “The thinking was, ‘We [at Havas] use our creativity to change behavior and get people to buy products,’” he says. “But we can also use the power of that creativity to affect positive change and impact behavior around some of the world’s biggest issues.”

OYW’s major annual event is a summit, which will be held here Oct. 18 to 22. Some 1,500 participants from 190-plus countries will visit Pittsburgh. Anchored at the David L. Lawrence Convention Center, they’ll focus on issues like education, global health, human rights and sustainable development. These delegates will be joined by an impressive roster of counselors who will also participate in the summit; that lineup includes keynote speaker (and former President) Bill Clinton, the Huffington Post’s Arianna Huffington, musician Joss Stone and celebrity chef Jamie Oliver.

The Pittsburgh summit will also feature a strong presence by social media leaders, which Jones says is “particularly exciting. We’ve got Wikipedia founder Jimmy Wales, Mashable founder Pete Cashmore and Twitter co-founder Jack Dorsey. With the exception of Mark Zuckerberg, it couldn’t be bigger in terms of these revolutionary media.”

Pittsburgh was in competition with nine other international cities to host the 2012 summit. The city’s bid, put together by a consortium of local companies, nonprofits and community organization was, says Jones, “brilliant and professional.” Personal endorsement letters for the city from former Presidents Jimmy Carter and George H.W. Bush especially impressed him.

But the city alone really sealed the deal for the One Young World selection committee, Jones says. Most notably, Pittsburgh’s ongoing rejuvenation and revitalization match nicely with the summit’s focus on the future, youth and problem solving. “I was so impressed the first time I visited,” says Jones, “and I saw synergies everywhere. There was the young mayor, the vibrancy of the young community. We visited the university campuses and saw so much going on.”

The One Young World Summit is designed to be as ecologically friendly as possible, Jones says, and here, too, Pittsburgh’s focus on sustainable development and “green” technology enhanced its bid. “You’ve got a city that will have the tallest ‘green’ skyscraper in the world — a city with the world’s first-ever ecologically friendly convention center. These were factors as well.”

Pittsburgh has a lot to gain from the Millennial Generation, both during and after the summit, suggests Jones. As with the G-20 Summit, the city will be in the international spotlight again. Local businesses and schools will have the chance to introduce themselves to young talent from almost 200 countries. And those delegates will get to see a remarkable American success story first-hand.

“The Millenials are the most powerful generation of young people that ever existed,” Jones says. “They understand more about the digital revolution that’s changing the world than anyone. They’re the most socially responsible. So my message to Pittsburghers is: How can you personally empower and support a brilliant young person in order to make the world a better place? Because you will absolutely benefit from it in the end.”

This article appears in the October 2012 issue of Pittsburgh Magazine.
Categories: Community Feature