For the Love of the Game

At the club’s 10th anniversary, the Pittsburgh Passion is at the forefront of women’s football. 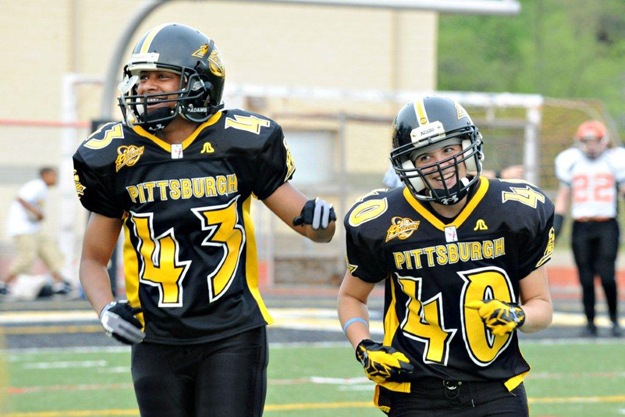 Photo courtesy of the Pittsburgh Passion

Lisa Horton doesn’t have much free time. As the veteran quarterback for the Pittsburgh Passion women’s football team, she’s at practice every night, running drills and developing plays.

At her day job, Horton is the CEO of D1 Pittsburgh, a sports training center housed in the Greentree SportsPlex; she spends her days keeping athletes in shape (and helping young people become world-class competitors).

And if that’s not enough, she’s also trying to train a puppy.

“It’s grueling at times, but it teaches you perseverance,” she says of her schedule. “I don’t know how the parents on the team do it.”

The Pittsburgh Passion, now part of the Women’s Football Alliance, is ready to celebrate its 10th season. Throughout the past decade, the team went undefeated in the regular season three times (2007, 2008 and 2011), won a National Women’s Football Association championship (2007) and racked up an overall record of 55-22. Impressively, they achieved these results with a roster of volunteer players … and only one full-time, paid staffer: Teresa Conn.

All that success — especially in a sport with almost no profitable franchises, where teams scrape to make it to road games — has attracted some serious attention. They’ve partnered with the Pittsburgh Riverhounds soccer team to develop their new stadium in Station Square.

They’ll host the WFA National Championship game this fall (and were selected because of their strong fanbase and success as an organization). They were honored as the 2011 Dapper Dan Sportswomen of the Year in March. And last year, they gained a co-owner who knows a thing or two about Pittsburgh football: Franco Harris.

In 2007, Horton led the squad to its first national title; after a few years away, she decided to return to a Passion lineup that had become one of the most enduring and dominant in women’s football.

Horton first came to Pittsburgh to try out for the Passion before the team’s inaugural season. A native of Middlesburg Heights, Ohio, she was coaching softball while earning a master’s in Exercise Science and Wellness at Slippery Rock University; when she heard about this new women’s football team (just an hour away), she knew she had to be a part of it.
“It’s in my blood,” she says. “From a physicality standpoint, it’s the sport I was meant to play.”

At the 2002 tryout, Horton met Conn, another strong athlete eager to get involved with the Passion. Conn, who’s currently the head coach and owner, played seven seasons with the team. The Passion lured Conn away from a 16-year teaching career; even having made that leap of faith, she “never dreamed it would take off like this.”

“We’ve been growing every year,” she says. “The fans led us to a great deal of success. We have been incredibly blessed that the city is behind us.”

Conn handles all aspects of team business — from planning travel and working with the WFA to setting up local events and charitable work. She’s grateful for dedicated volunteer help from players and friends (like Jennifer Yee, who serves as marketing director entirely pro bono) — but fundamentally, the organization’s survival and success are riding on Conn.

“I jumped in with both feet and had to make this work,” she says. “I loved it and wanted to see it succeed — and I knew that it could.”

The team’s goals and ambition have rapidly expanded since 2002. They’re eager to move into their new home. (They’ll play this season at their old stomping grounds, George K. Cupples Stadium in South Side, and transfer to Station Square for 2013; however, the National Championship Game will be played at the new stadium.) They’re working to establish girls’ youth flag football leagues in Pittsburgh and transfer their love of the game to another generation. And they’re taking the Passion name across the pond: Several players will be part of a U.S. national roster in an upcoming women’s flag football tournament in Sweden.

But the real goal — the immediate, driving objective — is to win another National Championship. Especially this year, when they’ll have a chance to do it in front of a hometown crowd.

Although that’s a rather sweet dream, it’s still a tough season away. There are 60-plus teams in the WFA, and the Passion will have to dominate their division (as well as new crosstown rivals, the Pittsburgh Force), to even qualify for the massive single-elimination
tournament that will bring them back home.

In the meantime, Conn says, they just want every dyed-in-the-wool local football fanatic to come see them play. The Passion will take the field at Cupples Stadium four times this year: May 5 against the Cleveland Fusion, May 12 against the Toledo Reign, June 2 against the D.C. Divas and June 9 against the Columbus Comets. You can also catch that all-’Burgh throwdown May 19, when the Passion will take on the Force on their home turf, the William V. Campbell Athletic Field in Munhall.

“You can’t be in this city without loving football — and these are your neighbors,” Conn says. “You’ll see heart. You’ll see excitement.”

This article appears in the May 2012 issue of Pittsburgh Magazine.
Categories: From the Magazine