For the Love of God, Let's Start Being Honest About Concussions 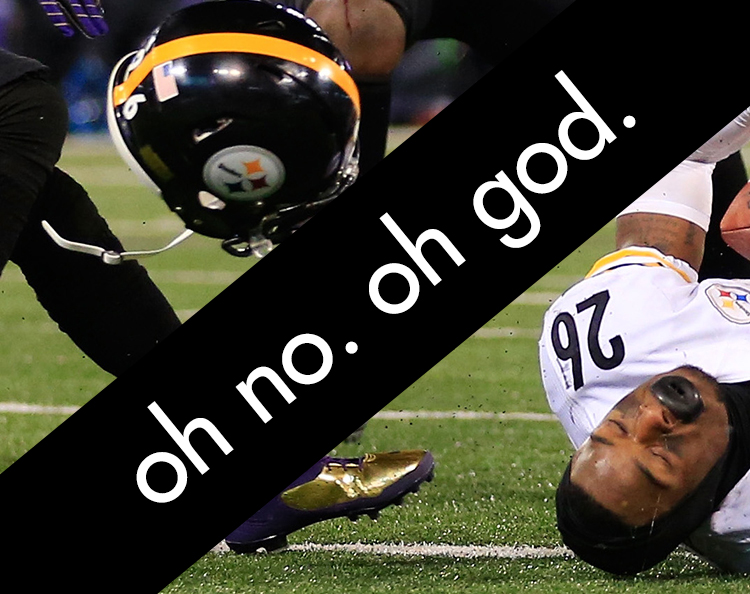 It was impossible to watch Bell's naked head bounce off the cold, hard ground and not think about certain horrors. To not imagine insidious spiderwebs of tau protein coursing through Bell's brain upon impact. To not imagine him washed out of the NFL before his second contract. To not imagine the ledger of his life being changed forever by one play.

And then, almost before the trainers could escort Bell’s wobbly body from the playing field, the officials delivered a bit of black humor so sinister that all you could do was laugh. After consulting with the replay cameras, which showed Bell’s head bounce, bounce, bounce, bounce off the turf infinitum, the zebras had concurred visa-vis the NFL’s Very Serious Player Safety Rules that because Bell’s helmet had Rock ‘Em Sock ‘Em Roboted off his cranium before the ball crossed the plane, the play was dead at the inch-line. At this point we became aware that Bell himself was in fact not dead, but merely swaying from side to side in an upright stupor as if trapped in the Mortal Kombat fatality screen.

And there it was. Finally. After a half-decade of wading through the queasy rhetoric and absurd pseudo-science of the league’s misinformation campaign, we were finally treated to the physical manifestation of the NFL’s concussion hypocrisy. Bell, rookie cannon fodder with no guaranteed contract, scored a touchdown while in a mini-coma. Until the NFL took it away because of a misinterpreted safety rule and in doing so literally took money out of Bell’s pocket.

Now that we’ve watched this Zapruder horror show again and again, can we all drop the pretense? Can we put an end to the point/counter-point nonsense? In the year 2013, the NFL knows three things that it will never publicly admit, and fans are complicit in the same denial:

1. Football is an inherently dangerous game, and no amount of helmet-technology research or headhunting rules will make players at the NFL level significantly less prone to brain trauma.

2. A decade of smashing the brain against the skull and shearing brain tissue will cause significant neurological problems for some NFL retirees.

3. No amount of scientific discovery or investment (of which the NFL has contributed a laughable percentage of its annual revenue) will change this fact of nature: the brain is encased in fluid and cannot be stopped from moving inside the skull.

There you have it. I’ve covered the science of concussions since 2010. I’ve interviewed more than two dozen prominent neurologists, engineers and researchers. Are there many things we still don’t know about sports-related brain trauma? Absolutely. Can we argue until we’re blue in the face over the NFL’s role in covering up the risk of concussions to players? Both sides can and probably will argue that point for decades in court.

None of that changes the lie we tell ourselves. Watch Bell’s body go limp again and again, and all the white noise fades away. The truth is self-evident: NFL players are going to continue smashing their brains in this manner for a very long time, and there’s nothing we can do to stop it.

The collision did not result in a penalty. It was an unavoidable car crash. Involuntary manslaughter at worst. If the Ravens’ Jimmy Smith doesn’t bear down and spear Bell into oblivion, he probably gets cut tomorrow. It was the only play Smith could make.

At the foot of nearly every article ever written about the concussion epidemic is a voice crying in the comment section wilderness in caps-locked indignation. “JUST LET THEM PLAY,” the voice cries, up-voted or down-voted feverishly depending on the publication’s clientele. “THIS IS F****** FOOTBALL.”

For years, I thought those righteous, wing-nutty Bluetooth aficionados were going to look like flat-earth loons decades from now. Now a part of me is starting to sympathize with them.

In Monsters, Rich Cohen’s excellent book on the ’85 Chicago Bears, former safety Doug Plank describes the constitution of an NFL hitter: "Try running into a wall. A normal person will slow down at the last moment — a hitter will accelerate. When people say I was great in my day, I say, No, I was just able to control my mind for those few seconds before impact. I never slowed down. I sped up. That's what makes a hitter. Not size, not speed. It's the ability to suppress your survival instincts … If you can convince yourself that what you're doing on that field is not going to hurt you, you'll be capable of anything. It takes practice. You have to develop the mental capacity to keep moving those legs even when you know pain is coming."

Bell and Smith both suppressed their survival instincts at the goalline on Thursday night. It was everything we ask of our NFL greats and of the league’s most violent rivalry. Recklessness. Unflinching sacrifice. It was the smashmouth football that we all secretly pine to make a return — like James Bond’s cigarettes and big, heavy plumes of industrial smoke over our city skylines, because, honestly, what’s life without a little darkness, a little danger, some stakes?

Doug Plank was 196 pounds. He looked like a regular fella — some guy at your gym. But for a few years, Plank was one of the most feared hitters in the NFL. He lived everyone’s dream by speeding up into the brick wall. And no matter how hard you clutch your pearls, no matter how many shambling ghosts of the NFL’s past that “Real Sports” trots out, what Plank did was cool. It’s just cool, and it will never not be.

Via the miracle of YouTube, millions of kids, no matter how much we warn them that such trauma could turn them to mush at middle age, are going to witness the miracle of Plank turning someone twice his size into a flailing windsock. They’re going to imagine themselves unleashing the same kind of hell on the hulking, Whey-saturated bullies who torture them at school. And those kids are going to see it for what it is: undeniably cool.

The NFL isn't going anywhere. Ratings and profits are higher than ever. So here’s a square deal. Here’s a solution that will save us from years of tedious litigation, moral rectitude and talking-head verbal diarrhea.

In a world of dignity and justice, Roger Goodell would wrap every single NFL draftee in his signature bear-hug and make a gentlemen's agreement: “Give this game everything you’ve got, and when you hang up this jersey, we got you."

There. Done. No more, "Is football dying?" thinkpieces. No more, "Durrrr, they knew what they were signing up for” comment-troll callousness. No more wasteful legal battles. No more heroes wasting away in humiliation as they wait for applications to special benefits panels.

Save us from the insulting PR bait-and-switches like the league’s one-time $100 million donation to Harvard University for concussion research — a preposterous 1 percent of the NFL’s annual revenue that the owners begrudgingly accepted during the 2011 lockout.

Save us from the most obvious spoiler alert in human history: that more years of neurological research is only going to confirm what science already suspects — decades of sustained brain trauma turns most people into an empty husk.

Save us from the nonsensical denialism of NFL owners such as the Cincinnati Bengals’ Mike Brown, who publicly called the link between concussions and dementia “merely speculation” during this summer’s training camp.

Save us from the underhanded brinksmanship of shysters such as Carolina Panthers owner Jerry Richardson, who cried poverty during the NFL lockout and argued that the players were creating an “unsustainable” business model for the league (in one bargaining session, when Peyton Manning was arguing for more funds for concussion research, Richardson scoffed, “What do you know about player safety?”)

While Richardson drew crude pie charts at press conferences and claimed that the owners had a “negative cash flow of $200 million,” he was hiding a big secret. Leaked financial documents showed that the 2-14 Panthers made an operating profit of $78.8 million in 2010. Richardson and his partners paid themselves $12 million each for running the league’s worst team. 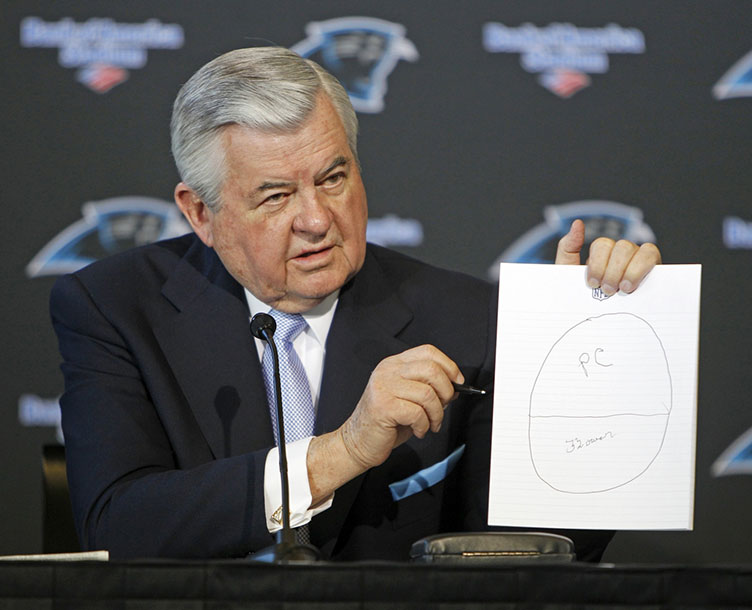 Save us from all of this. Instead, let’s embrace honesty for once. NFL owners are rich beyond comprehension and using taxpayer subsidies to build cash-printing megaplexes of luxury suites and $7 Pepsis. And you know what? We’ll take that deal. In the end, we’ll knowingly get ripped off if it means we can retreat from the depressing minutia of daily life for a few hours every weekend to watch 22 human beings suppress their survival instincts to impose their will on a game that is not safe, not salvageable, not nice or fair.

Just don’t treat us like mouth-breathing idiots. Don’t have your owners hold up a kindergartner's interpretation of a pie chart at a farcical press conference and tell us you’re all going broke. Don’t have your chief executive go on national television again and again just to keep repeating that there’s “a lot we don’t know” about brain trauma. Don’t keep showing Le’Veon Bell’s naked head smashing against the cold, hard ground in super-slow-mo and ask us to suspend our disbelief.

We all know what we’re watching. It’s horrific and therefore thrilling. It’s a testament to courage and the human spirit. It’s a bunch of real human beings speeding up into a brick wall.

So let’s take 5 percent of the league’s annual budget (about $500 million per year) and devote it to medical relief, preventative care and therapy for former NFL players — the incredible athletes who do things like this, and this, and this while the oligarchs of the NFL watch their immeasurable wealth accumulate from taxpayer-financed luxury boxes. The league will continue to bathe in money for decades to come. We can all stop talking about this at cocktail parties. And maybe, just maybe, the desperately needed preventative care will stop another friendly NFL legend from turning into an unrecognizable monster and shooting himself in the chest with a revolver at age 43.

Just don’t give us another second of this cloying moral sleight-of-hand. What we watched stretch out over 10 minutes of replays late on Thursday night was not football. It was televised lawyering. Le’Veon Bell — suspended in mid-air, broken helmet floating off-screen, eyes glazed, body lifeless, naked head shining under the floodlights, technically down by near-decapitation, technically safe, about to fly another half-yard as a non-person — the lie we tell ourselves.