At Allegheny Health Network, new mothers receive specialized treatment for a condition many have suffered through in secret. 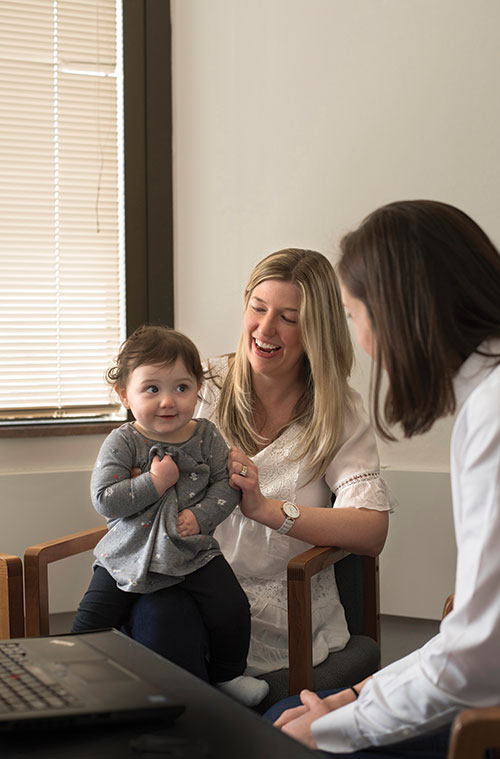 Erin Benacquista’s mind was racing. Late one Saturday evening, her 1-month-old baby, Daphne, had a temperature of 99.6 degrees. She couldn’t escape the fear that something could be seriously wrong. She decided to have her pediatrician paged.

The doctor called her back and listened to her concerns.

“I’m not worried,” the pediatrician told her. “You should not be worried.”

After all, the temperature was only one degree above normal.

That’s when it struck her — she was suffering from anxiety about her baby. It was the first time that Benacquista, who lives in Ross Township, had experienced that kind of worry; it hadn’t struck five years prior when she was a first-time mom.

Her obstetrician recommended West Penn Hospital’s program for women suffering from pregnancy-related depression and anxiety. Benacquista says the therapy and support she has received there has helped her to enjoy her baby without being weighed down by the dull ache of worry. She brings Daphne, now 7 months, to the sessions.

“Worrying about a 99-degree temperature is no way to spend your day,” Benacquista says. “This is a real resource for women. I truly cannot say enough about the staff.”

​Benacquista attends weekly counseling sessions; other new mothers whose depression may not respond to traditional therapy attend the Intensive Outpatient Program at West Penn Hospital, part of the Allegheny Health Network. The more intensive program opened in November as part of an emerging method of treatment now in place at about 15 hospitals nationwide. It treats pregnant women suffering from depression as well as new mothers, babies in tow, who attend three-hour sessions three times a week. 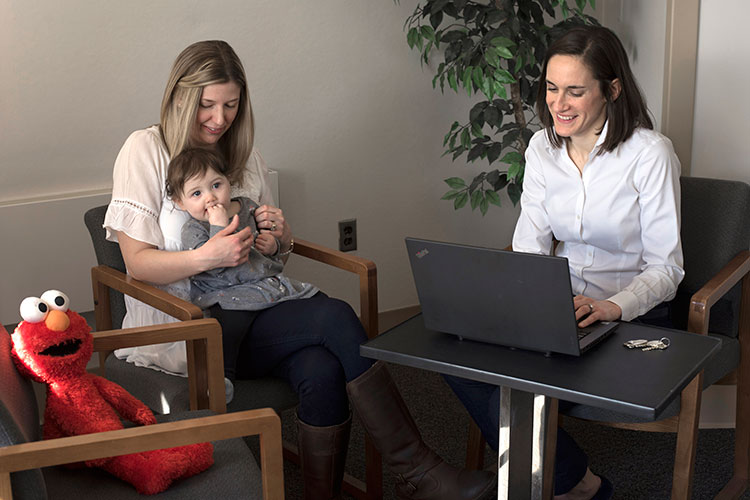 Women with postpartum depression often experience crying, insomnia, fatigue, appetite changes, loss of enjoyment in activities, anxiety and difficulty forming an attachment to their babies. For women with severe cases, once-a-week sessions available through some programs may not bring them relief from severe depression or anxiety, according to Dr. Sarah Homitsky, medical director for the Women’s Perinatal Psychiatry Program at West Penn Hospital.

Even though postpartum depression occurs after an estimated 15 percent of all births, mothers often hide their despair because of expectations that they should be awash in a maternal glow.

“There is this sense that this should be the happiest time of your life,” says Homitsky. “It’s like, ‘How could you be sad? You have everything you want.’ That just fosters hopelessness and guilt [in] women who are doing their best. They say, ‘I am the worst mother in the world. I’m never going to be good at this.’’’

Instead of feeling maternal bliss, sometimes mothers settle in with their newborns and find themselves overwhelmed. “They feel guilty for making mistakes throughout the day, being forgetful and not anticipating things,” says David Rizzo, a social worker at the program. “Self-blame is often unwarranted. We consider alternative perspectives. We help them establish effective skills to push back against depression and anxiety.”

The program allows staff to observe women with their babies and tailor the program to each woman’s needs. Mothers also are taught how to massage their babies and hold them in a way that enhances bonding. The depression and anxiety may be treated through a combination of medication, cognitive behavioral therapy, yoga, meditation and light therapy.

For Benacquista, counseling with Rizzo helped her to slow down her anxious thoughts. She learned mindfulness and grounding techniques to break free from her emotional state — concentrating on something factual, such as mentally going through the steps of making a recipe for dinner. The staff’s familiarity with the issue of postpartum anxiety also was reassuring. “I felt like David knew what I was going to say before I said it. They have such vast experience with this issue.”

Though Benacquista’s husband is supportive, other new mothers have to navigate strains in interpersonal relationships. The arrival of a new family member may disrupt routines or change dynamics; this can put significant strain on a marriage.

“We might bring in the partner for a discussion — it would be valuable to your wife’s well-being if you took care of the overnight feeding and you let her get five hours of uninterrupted sleep,” Homitsky says. “We offer to incorporate partners, grandparents, other relatives.” 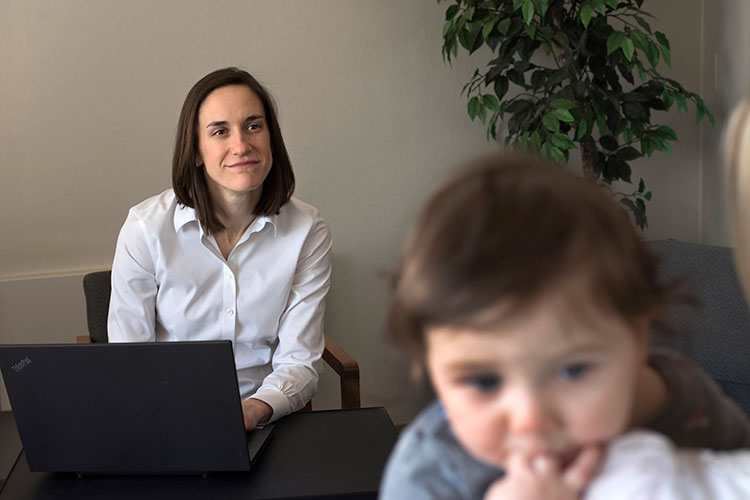 Other times they use role-play to help women communicate what they need to family members. “We are talking about day-to-day things,” Homitsky says.
Many women benefit from group discussions with other women going through the same kind of pain.

Though model and television host Chrissy Teigen recently revealed that she was so overwhelmed by postpartum depression that she could barely leave the house, many new mothers keep it a secret, increasing their feelings of isolation and despair.

“It is incredibly valuable to have other women provide validation,” Homitsky says. In fact, graduates of the six- to eight-week program often cite the group sessions as the most valuable component in their feedback. “They can relate to other patients’ stories. Peer mentorship is really important.

“Treatment really does work,” Homitsky says. Unfortunately, she adds, only 6 percent of women diagnosed with postpartum depression will receive adequate treatment; only 16 percent will even initiate it.

The risks of leaving postpartum depression without treatment are high, including the potential for harmful effects on the baby’s ability to grow and hit cognitive milestones.

To get more women the treatment they need, Allegheny Health Network medical practices screen women for depression and bipolar disorder three times — from pregnancy through delivery and after birth. Depression during pregnancy is a strong indicator that a woman is at higher risk for postpartum depression. Those who show signs of depression can be connected immediately with a health care professional and sometimes are candidates for the Intensive Outpatient Program.

For Benacquista, the therapy at West Penn has made all of the difference, and she has referred other new mothers to the program.

Daphne is thriving, too. On a recent visit, her pediatrician said she is hitting all of her milestones.

“And you haven’t been calling me anymore on Saturday nights,” the doctor says.

​Benacquista nodded her head. “I feel so much better.”

This article appears in the May 2017 issue of Pittsburgh Magazine.
Categories: Medicine and Health Features