For a Relaxing Night Out, Throw Axes at the Wall

A trip to LumberjAxes, the competitive axe-throwing spot in Millvale. 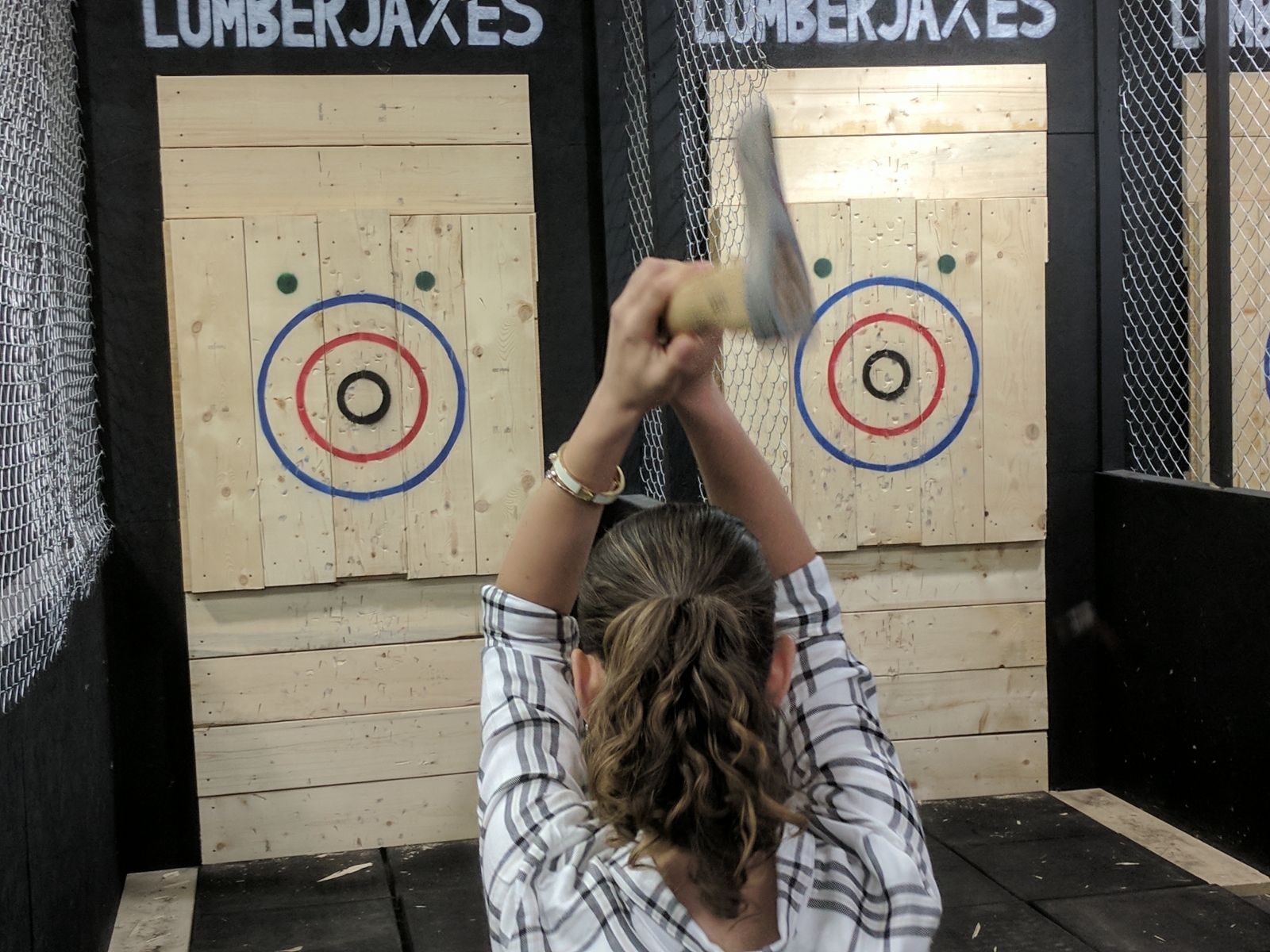 LumberjAxes is great. You should go there.

I am not saying this simply because I emerged as the champion of the group, besting my foes in a single-elimination tournament after several hard-fought battles. The fact that I discovered a heretofore-unknown proficiency at the sport of axe-throwing, while delightful, is not the reason I am recommending you take part in this activity.

Would I like to make it abundantly clear that I am very good at hurling axes at a target? Am I determined to ensure that you, the reader of this post, retain the knowledge that I not only defeated six competitors at the sport of axe-throwing, but did so in dramatic fashion involving a well-timed and precisely placed bullseye in the ultimate round? Yes and yes.

I would, however, be recommending LumberjAxes to you even if I had lost. (Which I didn’t. I won, to be clear.)

Freshly opened in the corner of Millvale that also houses Grist House Craft Brewery, LumberjAxes is a spartan business housed in a former warehouse. A long row of axe-throwing lanes lines one wall; think of the basic layout of a bowling alley, but with shorter lanes. A group of picnic tables, from which you can distribute beverages (LumberjAxes is BYOB) to your group, sits to one side.

On arrival, your group — a minimum of six people — will sign a waiver and be taught how to safely and accurately throw axes. Everyone gets a few warm-up rounds to get the hang of it; the motion required is a bit counter-intuitive, almost purely relying on momentum rather than arm strength or power.

Once everyone is reasonably familiar with the basics, head-to-head competition begins; your instructor will draw the matchups and keep score, freeing you from the burden and allowing pure focus on your game. The early rounds determine seeding for a single-elimination tournament; by the end of the session (which lasts more than two hours), one of your number will be declared the victor.

(To reiterate: That was me. I was the victor.)

LumberjAxes will scratch the same group-outing itch that bowling or mini-golf does, albeit with a much more uncommon skill. But the stroke of genius here is having a dedicated instructor. At similar activities, time and effort can be poured into managing the rules and scoring; disagreements over how seriously to take the proceedings can drag down an afternoon, as those just out to goof around and those with a competitive spirit can disagree (to say the least). Here, all that is taken care of; you must simply be ready to throw when your instructor calls you over, and all the scoring decisions and rule-following is out of your hands. Compared to this, bowling can be positively stressful.

There is undoubted joy, as well, in the action of axe-throwing. Taking an inert and imposing tool and turning into not only a projectile, but one that even the novice can aim with accuracy, is remarkably satisfying; most of my group was eager to return as soon as we departed, and several of us continued to discuss throwing motion and technique into the evening.

As to the BYOB aspect: I would heavily advise against drinking more than a round or two. While the instructors are remarkably good at making sure you’re safe and responsible, there is still a weapon at hand; you don’t want to be sloppy, here. Taking a few six-packs among a large group is a fine idea, though (or, better yet, fill up a growler at Grist House on your way in).

At $35 per person (or $20 for one-hour, walk-in sessions), it’s a more expensive outing than a trip to the bowling alley. But for the extra cash, you’re gaining a memorable and rare experience and learning a skill that could easily develop into a hobby (LumberjAxes is in the process of setting up league play).

It’s a great way to spend an afternoon. Particularly if you find that you’re the best at throwing axes in your group of friends. Just like I did. I was the best one. I threw the hell outta some axes.

(I am not at all used to being good at an athletic activity, by the way, and I’m not sure how to handle it. Am I gloating? Nah. Probably not.)