My picks for things to do during the weekend sandwiched between two weekends of Steeler football. 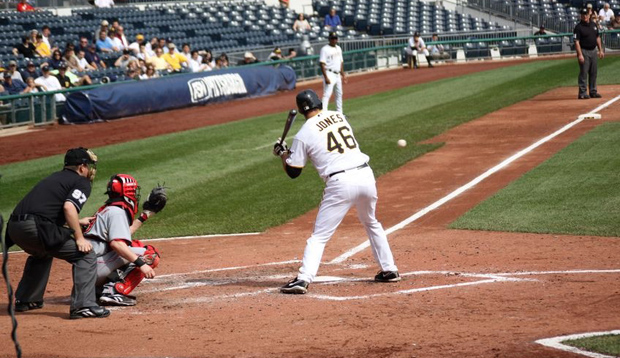 Garrett Jones at bat during a game last season. Check out the Pirates this weekend at PirateFest, at the David L. Lawrence Convention Center, downtown.

Are you suffering from football withdrawal?

Football withdrawal is a very real—and very serious—condition known to strike residents of certain major metropolitan areas at specific points during the year. While outbreaks are not uncommon during bye weeks, early spring or the month just before training camp, the most severe cases of football withdrawal have been reported in Super Bowl-bound cities during the dark, lonely, painful 13 days between championship Sunday and the game itself.

Doctors recommend distracting and engaging visual spectacles, combined with alcohol when available, as proper treatment for football withdrawal. A list of prescriptions for this week follows. Going against doctor’s orders for treatment is hazardous and may lead to attempts to sit on the Art Rooney statue’s shoulders for a hilarious photo-op.

Attack Theatre produces some of the most unique, genre-bending performances in Pittsburgh on a regular basis. Nominally a dance troupe, the company’s work features live (and often original) musical accompaniment from a range of avant-garde composers. That music frames the performances, which swirl theater, technology and just plain weirdness around a modern dance core.

If that sounds vague and artsy … well, the shows are vague and artsy. You need to adapt a certain mindset for Attack’s shows, but a healthy detachment from any literal interpretation will help (as will pre-show booze). I’d recommend dropping by Monterey Pub in the North Side before heading to the New Hazlett Theater for Attack’s Show #58, a 15th-anniversary retrospective reviving three of their more memorable pieces and introducing a new addition to their repertoire. (Attack Theatre Presents Show #58, New Hazlett Theater, 6 Allegheny Square East, North Side. Thur.-Sat., 8 p.m. A $25. Info: 412/394-3353, attacktheatre.com. Monterey Pub, 1227 Monterey St., North Side. Info: 412/322-6535, montereypub.com)

SATURDAY: DOWN AND DERBY & BELVEDERE’S, LAWRENCEVILLE

Belvedere’s is far from bring one of my favorite bars, but it does have its charm. You remember that really cool kid in about eigth grade that had the awesome basement with a pool table and a loud stereo, and his parents didn’t care how many people he had hanging out down there? Yeah, Belvedere’s is basically that—with beer. Not exactly anything you have to see, but comfortable enough.

But nothing is as appealing to me as the combination of alcohol and potentially dangerous activities, so I must endorse Down and Derby, the occasional “roller disco” that pops into Belvedere’s a few times a year. Down and Derby is a national organization of sorts, but events are exclusive to New York, L.A, San Diego, Vegas … and, surprisingly, Pittsburgh. You have to RSVP (at downandderby.org) and bring a waiver that absolves them of any liability for you downing one too many Pabst’s Blue Ribbons and slingshotting your rolling self through a window, but beyond that, fun times should be had by all. Their DJ’s are fearsome, and the site of a bunch of 20-somethings rolling around all crazy-like should be its own draw. (Down and Derby at Belvedere’s, 4016 Butler St., Lawrenceville. Sat., 9 p.m. $6. Info and RSVP: downandderby.org)

Yes, it is late January, and the start of baseball season is a mere two months away. Our beleaguered Buccos will soon be reporting to Spring Training, and we will soon begin to figure out just who the hell is on the team this year anyway.

Get a head start on your introduction to the 2011 Pirates with this weekend’s PirateFest at the David L. Lawrence Convention Center. A long-standing tradition, the annual January convention was originally aimed at kids but has recently expanded into an all-ages affair. Autographs will be available from standouts like Andrew McCutchen and Evan Meek as well as alumni like Al Oliver; plus collectibles and exclusive events will be auctioned off to benefit Pirates Charities, and this may be your only chance to play Guitar Hero with reliever Jeff Karstens.

Volunteers will be collecting canned food donations all weekend and will trade you a Pirates decal for your grub—to go with a truckload of other gifts they’ll give you just for showing up. The Pirates have become pros at thanking fans for sticking with them, and PirateFest is one of their best efforts. (PirateFest at David L. Lawrence Convention Center, 1000 Ft. Duquesne Blvd., downtown. Sun., noon-5 p.m. Also Sat., 10 a.m.-8 p.m. $12. Info: 1-800-BUY-BUCS, pirates.com)

This article appears in the January 2011 issue of After Dark.
Categories: After Dark